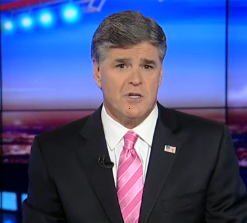 Sean Hannity trotted out Fox’s Lt. Col. Ralph Peters for a session of emboldening our enemies and undermining our troops over the Bowe Bergdahl prisoner swap. Or so Hannity would have said if anybody spoke this way about a Republican president.

The Hannity show’s decision to host Peters for a discussion that purported to ask why the Army is “delaying release of Bergdahl probe” guaranteed that the answer would boil down to Obama’s heinousness and lack of proper American fiber.

Of course, Hannity doesn’t need no stinkin’ report to know that Bergdahl is guilty. Just pay no attention to how Hannity condescendingly told an African American official from Ferguson, Missouri about the white police officer who shot unarmed, African American Michael Brown, “Let me educate you about the legal system in America. …In our system of justice, a person is innocent until proven guilty.”

Now, Hannity “asked” Peters, “We know what the results are… Why is the government not, not telling the American people the truth?”

Surely, Hannity must have been delighted with Peters’ response. Basically, Peters replied that the report will be withheld until after the midterm election because Obama will lose no matter what. “If the White House was able to exert sufficient pressure on the chain of command in the Pentagon to whitewash Bergdahl’s actions, then there’s gonna be this huge outcry from those serving in uniform, from veterans, from conservatives, from you, Sean – you’ll stand up, too – and certainly from me.”

Yes, Iraq war lover, Sean Hannity stands up for the troops – when it serves his political purposes.

But if the Army “got some backbone,” Peters continued, and finds that Bergdahl should be charged with desertion, then Obama’s Rose Garden ceremony (where Obama announced Bergdahl’s recovery) “looks like an even greater debacle.”

Of course, Hannity didn’t remind viewers that Peters smeared Bergdahl’s father as “Pops Taliban” or that Peters' “patriotic” bona fides include suggesting Bergdahl should be executed without bothering with an investigation (much less a verdict). So Peters went unchallenged when he said last night, “I want to make one thing clear to all the viewers. I have nothing personal against Bergdahl. I never met the guy.”

Peters, who has probably never met President Obama either, went on to say the following:

The Obama administration really despises our military, in my view. And they understand why Bergdahl would desert. They just don’t understand why anybody would join the military.  And so he fits their Oliver Stone view of warfare.

Undoubtedly, Peters’ welcome mat on the Hannity show just got a bit bigger.

Watch the kind of talk Hannity calls “besmirching” when it comes from the left, below.

Which reminds me of this SIDE SPLITTING PARODY of the late Dean Martin’s signature tune “That’s Amore” — this parody is called “That’s A Moron”:

In Foxie land where dumb is king,
When Sean is on here’s what we say……..

john howard commented 2014-10-16 12:19:38 -0400 · Flag
Where is Hannity friend the KKK dude that Hannity and his son was always hanging out with. And R.Murrdock doesn’t mine Hannity hate Jews, oh well green make everything O.K.

Photo Op Hannocchio claims he supports the troops. We will believe it when he waterboards himself for the troops like he promised.

Those Freedom Concerts came to a screeching halt when a conservative blogger exposed his high-end spending at hotels, and private jets.

Hannocchio would have heart failure if Jr. joined the military. This Long Island Lolito rather see Jr. on the tennis court than in military uniform.

NewsHounds posted about Fox’s Peters: Obama Despises The Military on NewsHounds' Facebook page 2014-10-15 16:29:40 -0400
Although Hannity condescendingly lectured an African American official from Ferguson not to prejudge the white police officer who shot unarmed Michael Brown, no such restraint is necessary to "know" that Bowe Bergdahl is guilty of desertion.