Fox News ‘Just Asks’ If Food Stamps Should Be Eliminated 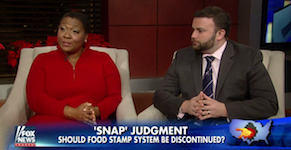 Apparently, throwing people off health insurance and demolishing Medicare and Social Security is not enough destruction of our social safety nets for Fox News. Now those Christian Crusaders are “just asking” if we should eliminate food stamps, too. UPDATED

On Fox & Friends, host Abby Huntsman began a discussion by saying, “$70 million of taxpayer money was wasted on food stamp fraud. So is it time to end the program altogether?”

Huntsman didn’t seem to think it was her job to point out that while the waste may seem egregious, the fuller picture is that more than $70 BILLION went to feeding hungry Americans.

Fortunately, Philip Bump, at The Washington Post, caught this attempt to pull the wool over viewers’ eyes:

Bump reported that the Government Accountability Office has “found billions and billions in potential savings in a variety of agencies and programs.” He even had a handy chart to show you how many times more than $70 million the potential savings for each of those agencies are. Let's just say that it was HUGELY more. He concluded by noting:

Another example. On Wednesday, we reported about a long-running scam operated by Leonard Francis, a Navy contractor who, over the course of several years, defrauded the government to the tune of $35 million.

As of writing, Fox News has not questioned whether we should disband the Navy.

Republican guest Joe Borelli ridiculously said that the Republican Party “can’t be, either in perception or in practice, the party that is seen as throwing people to the curb.” Yet, as he spoke, the familiar Fox graphic of a large, outstretched hand breaking through a map of the United States, followed by the letters ENTITLEMENT NATION, showed on the lower right of the screen.

Huntsman seemed to think that her main responsibility was to open with an inflammatory statement, followed by an obviously leading question, and then do her best to help frame conservative talking points in the form of a question. So later, when Borelli proposed “modest cuts” to food stamps, she didn’t ask what that entailed. Huntsman did, however, make an effort to pressure the GOP to start cutting the safety net.

Huntsman euphemistically said that Republican House Speaker Paul Ryan is “very passionate” about “getting this right,” and then “asked” Borelli whether there is “anything that can be done, that will be done, you think, in the next four years?”

Meanwhile, the other guest, Jehmu Greene was yet another one of those nice, likable, go-along-to-get-along Fox News Democrats who put forth a credible argument but never called out what Fox was up to or how it was trying to rationalize something really heinous. She didn’t even point out that Fox was ignoring much larger waste and abuse in order to stage this latest battle in its war on the poor.

They should all be ashamed of themselves. See why in the video below, from the December 27, 2016 Fox & Friends.

I have no idea where Fox's $70 million figure comes from—and I looked pretty hard for it. The Fox graphic attributes it to "2016 USDA," but as near as I can tell the USDA has no numbers for SNAP fraud more recent than 2011.

Mother Jones' analysis pretty much destroys even the premise the Fox based its BS premise on.

I'm going to bet Fox got its numbers from a Republican source and didn't bother to do much, if any, fact checking.

truman commented 2016-12-29 17:01:35 -0500 · Flag
Fux Noise and the GOPiggies get a collective woody when they even think about taking food stamps from hungry children and taking Medicare and Social Security from your grandma and grandpa.

Erich Pomfret commented 2016-12-29 16:58:09 -0500 · Flag
The very idea of “letting ’em die” was shocking and preposterous when it came up at a GOP debate only 5 short years ago. Now, our once-great nation is at the doorstep of making that into law. Forgive them, Father, they know not what they do.

David Lindsay commented 2016-12-29 11:13:48 -0500 · Flag
Actually there are no more physical food stamps. Fortunately it’s all gone digital with cards replacing stamps. The old physical food stamp system was rife with corruption. Food stamps could illicitly purchase booze, drugs, prostitutes and just about anything under the sun. The illicit food stamps would finally end up at the corner grocery store. They had too. The grocer who was in on food stamp fraud was the one who would really clean up. But no more. Food stamps went digital and it’s much more difficult to pull off fraud.

You would think Faux would be happy with that. They won’t be satisfied until people are starving to death in the snow.