Ralph Peters Quits Fox News And Goes Nuclear: ‘I Am Ashamed’ Of The ‘Propaganda Machine’ 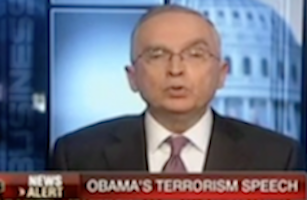 Lt. Col. Ralph Peters (Ret), a long-time analyst for Fox News, is so upset with the "propaganda machine" the network has become, he reportedly decided to quit in a “nuclear” fashion. I think we can say, "Mission accomplished!"

According to BuzzFeed, Peters terminated his relationship with Fox and sent a blistering email to his colleagues on the way out. Here’s an excerpt:

Today, I feel that Fox News is assaulting our constitutional order and the rule of law, while fostering corrosive and unjustified paranoia among viewers. Over my decade with Fox, I long was proud of the association. Now I am ashamed.

In my view, Fox has degenerated from providing a legitimate and much-needed outlet for conservative voices to a mere propaganda machine for a destructive and ethically ruinous administration. When prime-time hosts—who have never served our country in any capacity—dismiss facts and empirical reality to launch profoundly dishonest assaults on the FBI, the Justice Department, the courts, the intelligence community (in which I served) and, not least, a model public servant and genuine war hero such as Robert Mueller—all the while scaremongering with lurid warnings of “deep-state” machinations—I cannot be part of the same organization, even at a remove. To me, Fox News is now wittingly harming our system of government for profit.

But wait, there’s more. Peters blasted “hosts who made their reputations as super-patriots” but “now advance Putin’s agenda by making light of Russian penetration of our elections and the Trump campaign.”

And then there’s the icing on the cake:

As an intelligence professional, I can tell you that the Steele dossier rings true—that’s how the Russians do things.. The result is that we have an American president who is terrified of his counterpart in Moscow.

CNN reported, "Peters had been telling friends that he planned on leaving the network in a 'nuclear' fashion, one of those friends told CNN.

Rest assured, Peters is no liberal. He’s a virulent Obama hater who was suspended in 2015 for calling him “a total pussy.” In that same appearance, Peters also said, “This is a president who doesn’t want to hurt our enemies. This is a president who cares more about thugs in Guantanamo, or thugs in Ferguson, Missouri, than he does about law-abiding American citizens and their right to live in safety and peace.” You probably get the picture.

CNN also reported Fox News' reaction: "Ralph Peters is entitled to his opinion despite the fact that he's choosing to use it as a weapon in order to gain attention," the network said. "We are extremely proud of our top-rated primetime hosts and all of our opinion programing." By the way, prime time is not quite so top-rated these days.

In 2014, I wrote a post called, “Fox News’ Ralph Peters Hates America – And Fox Loves Him For It.” In it, I cited many of his jaw-dropping attacks on Obama’s patriotism. I said that his “extreme animosity toward our president … reveals that the one who really hates America is Peters.

Chances are Peters and I will never be buds. But today I retract those words and salute him.

Watch the comments that got Peters suspended from Fox below, from Fox Business’ December 7, 2015 Varney & Co, via Media Matters.

I’m not exactly a fan of Peters but I have to give him credit for how he went out. He could have simply left quietly. Also, every word he said is true.

mj - the same one commented 2018-03-21 13:26:47 -0400 · Flag
@ Eyes On Fox: “Fox News has always been a propaganda factory. Which means Peters was fine with the propaganda as long as it matched his ideology. Now that Trump TV is attacking some agencies he worked with and has loyalty to he’s throwing a fit.”

Exactly. Peters is the latest version of Sarah Palin: Palin had been a Fox DARLING, until she bit the hands that fed her and had the temerity to call Fox a “quasi-conservative” outlet — she was then put into her place by none other than Bill O’Reilly (who no doubt enjoyed that particular role), then put out to pasture . . .

Richard Santalone commented 2018-03-21 10:27:01 -0400 · Flag
Hmmmmmmmmmmm, I wonder if Lt. Col. Ralph Peters will also give up his HIGH-PAYING newspaper column gig at the New York Post, a longtime perennial reich-wing tabloid? Don’t forget: the New York Post is a sister company to FoKKKs Spews Channel (i.e. they are both owned by Fuehrer Twitler’s minister of propaganda Rupert “Goebbels” Murdoch).

Eyes On Fox commented 2018-03-21 09:02:15 -0400 · Flag
While Peter’s breath of honesty is welcome, his memory at the network is buried in hypocrisy. Fox News has always been a propaganda factory. Which means Peters was fine with the propaganda as long as it matched his ideology. Now that Trump TV is attacking some agencies he worked with and has loyalty to he’s throwing a fit.

Trump TV’s response? Not that we’re straight shooters. Actually fair and balanced. No, it’s our ratings are high. Certainly for the same reason an uneducated demagogue like Rush Limbaugh leads radio ratings. Right-wingers aren’t interested in truth or information. No, they just want to be told sweat lies. 🤥

w d commented 2018-03-21 03:30:01 -0400 · Flag
So one paid accomplice has a Jerry McGuire moment and walks off the set with his dignity in tact. he will be replaced by someone who once played an intelligence official on TV who will spew the company line and wind up in tRump’s cabinet, no doubt. Fox has become the swamp. I wonder if they acknowledge their treason in their staff meetings … or if they are all sitting around “getting back” at everyone out there who would never give them a date in high school …

Who would want to work for this demonic “news” network? The suits, their mouthpieces, and producers have no morals or decency. These self-absorbed frauds will go down in flames when The Don is removed from the White House.