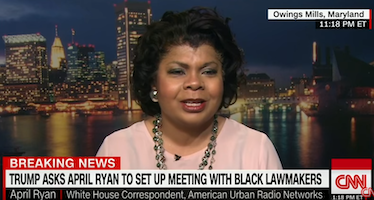 Mike Huckabee has a heckuva nerve complaining about CNN’s April Ryan saying Trump should “lop the head off” Sarah Huckabee Sanders as a metaphor for demanding she be fired after the Mueller report exposed her lie about the firing of James Comey.

As I previously wrote, Huckabee Sanders’ lie, that a major reason for Donald Trump firing Comey was that “countless” FBI agents had told the White House they lost confidence in him, was exposed in the Mueller report. When she was under oath, the report revealed, Huckabee Sanders called her comment a “slip of the tongue” that had been made, “in the heat of the moment” and “was not founded on anything.”

Now that she’s no longer under oath but is under scrutiny for the dishonesty, Sanders has been on a media tour lying about her lie.

Ryan, also the White House Correspondent and Washington Bureau Chief for American Urban Radio Networks, was incensed. On Thursday, she called for Sanders to be fired:

RYAN: Not only does she not have credibility, she lied. She out and out lied. And the people – the American people can’t trust her. They can’t trust what’s said from the President’s mouthpiece, spokesperson from the people’s house. Therefore, she should be let go. She should be fired, end of story. When there is a lack of credibility there, you have to start and start lopping the heads off. It’s Fire-Me Thursday or Fire-Me Good Friday. She needs to go.

Cue the ginned up poutrage! Daddy and Fox News contributor Mike Huckabee, who was a Southern Baptist pastor for 12 years before becoming a politician, didn’t seem to mind his daughter’s dishonesty:

So liberals—is this okay?Does CNN have the integrity to deal w/ this incitement to murder? CNN's April Ryan Says Sarah Sanders' Head Should Be "Lopped Off" https://t.co/8fdYiOzggf

Will the ⁦@whca⁩ revoke April Ryan’s credentials? If not, they are gutless tools. CNN's April Ryan Says Sarah Sanders' Head Should Be "Lopped Off" https://t.co/8fdYiOzggf

Ryan, meanwhile, isn’t taking Huckabee’s attempt to deflect from his daughter’s lies (with bonus deflection points for smearing CNN, the media and liberals while he was at it) lying down. Ryan shot back by citing a clip in which Huckabee suggested his daughter was about to “gut” her “like a deer.”

Hey Mike you said I should be gutted like a dear. Do you remember? Don’t lie! God is watching and I have tape! https://t.co/M72QQACjqV

The video Ryan referred to is below. Personally, I think it’s a bit far-fetched to say that that’s what Huckabee suggesting there. However he definitely used that metaphor with laughing approval. And it's equally clear, Ryan was not calling for any violence toward Sanders. Furthermore, I recall Huckabee likening the IRS to the Gestapo; likening the Iran nuclear deal to the Holocaust; suggesting a mass shooting in Aurora, Colorado was caused by Godlessness in public schools; and he “joked” that Donald Trump should send Rep. Maxine Waters to North Korea so that Kim Jong-un would kill himself (this was before Trump and Kim became BFFs).

Oh, and Huckabee has a selective love for the truth, too. Or maybe this was just another Huckabee “slip of the tongue":

You and your daughter are liars and Why is she getting paid to be press secretary if there are no briefings. Why is she afraid? https://t.co/oUpSVVbLx2

As I thank God this day and for his sacrifice as you should be doing, I have a warning for you! If anything happens to me or mine or anyone connected to me, you and your daughter and this administration will be held accountable! So you better stop now! https://t.co/oUpSVVbLx2

Will you get into heaven? The answer is no! https://t.co/oUpSVVbLx2

You sir need to sit down. You gave me a veiled threat not long ago. You call yourself a man of God? Boy bye! As your people come for me! My people see you and will do the same for you! https://t.co/M72QQACjqV

Watch Ryan call for Sanders to be fired and Huckabee’s “humor” about getting “gutted like a deer,” (from November 2017) below:

"Not only does she not have credibility, she lied. She out and out lied...the American people can’t trust her," says @AprilDRyan of Press Sec. Sarah Sanders.
"She should be let go. She should be fired, end of story...it’s fire me Thursday or fire me Good Friday. She needs to go." pic.twitter.com/M0whZiHg1l

Eyes On Fox commented 2019-04-21 11:15:13 -0400 · Flag
I don’t know which side started the politically correct narrative of hypersensitivity over ‘violent’ metaphors in political discussions. But, while I agree Huckabee is being a hypocrite here, so is Ryan. Liberals are extremely sensitive and vocal over this sort of thing so they should avoid these sort of metaphors like the plague.