Fox did not air much of the memorial for slain NYPD officer Rafael Ramos today but that didn’t stop the network from smearing others as enemies of the police, blaming New York City Mayor Bill de Blasio for Ramos and his partner’s deaths, race baiting and suggesting that the protests will take down the economy.

Of course, the economy has been going gangbusters, despite the protests raging since late November, starting in Ferguson and continuing with the protests in early December over Eric Garner’s death in New York City.

But Fox producers showed footage of black looters while host Eric Bolling fear mongered that we’d be regressing back to the 70s when “crime was substantially higher” and the “economy was substantially weaker.” 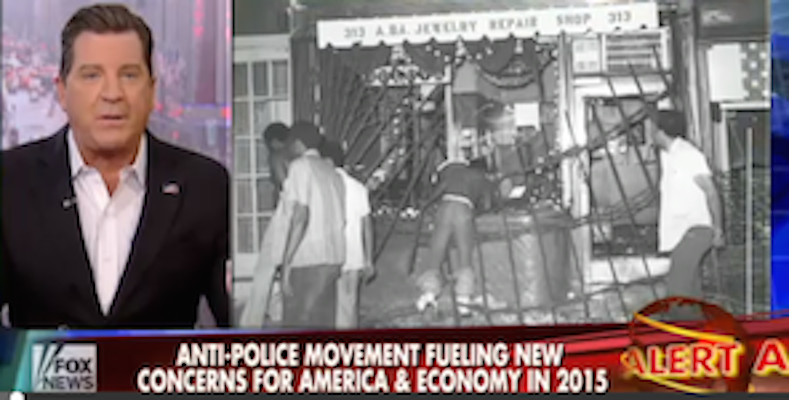 However, Fox News contributor Michelle Fields took the prize for worst hate mongering in the segment.

FIELDS: What Bill de Blasio’s doing is he’s telling New York City that he’s on the side of the protesters, the thugs, the ones who celebrated and cheered when those two police officers’ dead bodies were on the ground.

Juan Williams, the token liberal on the panel, mildly responded, “That’s not right, Michelle. Look, the person who killed those cops…”

Fields interrupted: “Why isn’t it right?”

Williams continued, “wasn’t a protester… was a mentally insane person who shot his own girlfriend.”

“No, no, no,” Fields interrupted again. “…It’s funny, …when Gabby Giffords – it’s Republicans fault. But when it comes to this, it’s not Democrats’ fault. Of course it is!”

Williams replied, “Michelle, this is not a tit for tat, left vs. right issue. It’s too serious. I will say this to you. I think that if you don’t understand why there are so many people in the streets, people who feel that they’ve been the targets of intimidation and harassment ….it’s about class, it’s about income… if you’re born in America, if you’re a minority, you should not be treated differently by the police.”

Bolling gave panelist Wayne Rogers the last word, almost certainly knowing that Rogers would end the segment on the meme. And sure enough, he did. Rogers said, “The free market supports freedom…we should support freedom and if the cops are supporting freedom, we should support the cops.”

Watch it below, from today’s Cashin’ In.

Although Fox would just love to milk this tragic event, they simply cannot find it in themselves to focus on the individuals involved. They prefer to focus on the undisputably white Patrick Lynch who couldn’t wait to make political hay out of a tragic event.
I’ve just read some interesting articles on the experiences of some non-causasian cops (see Headley’s blog “notnowsilly”).

“Any reporter who doesn’t follow their foolish guidelines will hear it from the useless cretins. The unlucky reporter could face suspension.”

Actually Antoinette, in most cases the unlucky reporter WILL GET INSTANTLY TERMINATED! Question: by any chance, have you ever seen the eye-opening and jaw-dropping documentary by Robert Greenwald entitled “Outfoxed: Rupert Murdoch’s War On Journalism”? I bought this documentary on DVD when it first came out.

Antoinette commented 2014-12-29 02:30:47 -0500 · Flag
Joseph, Nixon Trainee Ailes and Ruthless Rupert are in bed with the NYPD. Officers’ patrol cars can be seen in front of the News Corporation/21st Century Fox chamber of horrors “protecting” employees from “scary liberals.”

Notice that ex-con Bernie Kerik and Big Mouth “Bo” Dietl are regulars on this fraudulent “news” channel. That’s how deep the relationship is between NYPD and the Foxes.

The Trainee and the suits will not go against the NYPD, and neither will their mouthpieces.

There is a criteria that the suits, producers and mouthpieces follow, and negative stories about the NYPD, the Bushes, Reagans, or any Fox-friendly public figure will not be aired. The managing editors of this fraudulent “network” are worthless, and they know who they are.

Any reporter who doesn’t follow their foolish guidelines will hear it from the useless cretins. The unlucky reporter could face suspension.

The masses remembers the Cliven Bundy saga in Nevada. The Las Vegas couple who shot the officers were at the Cliven Bundy ranch. Although Bundy people oust the couple, the indoctrination has already set in.

If Hannocchio kept his nose out of the Bundy saga, those officers would still be alive today. This Long Island Lolito has blood on his hands for the rest of his miserable life.

The police are the oppressors

Aria Prescott commented 2014-12-28 14:19:13 -0500 · Flag
@joseph West: Excellent point, but I’ll take it one step further: When Patrick Lynch sat around telling the cops in his union how they needed to declare war on New York City, help him shake down city hall, and divide the people in their lives into friends and enemies…

Fox News was parading him around as a hero. Even with their undying support of New York cops (but only the ones who don’t see blacks as people), you’d think they’d have thrown Lynch under the bus, just to keep their cred on the “union thugs” line, but no. they’re in lockstep support of exactly what they claimed teachers and nurses were doing, because it furthers their assault on De Blasio.

Joseph West commented 2014-12-28 01:51:59 -0500 · Flag
I can NOT wait until the NYPD’s union starts to renegotiate its contract, calling for pay raises. THEN we’ll see just how quickly FoxNoise reverts to its union-bashing premise, even though they’re all supportive now.

I also think it’s going to be funny when that contract is up for renewal and de Blasio decides to “turn HIS back” on the cops’ demands. And we certainly know the cons won’t be supportive of massive cases of “blue flu.”

NewsHounds posted about Fox’s Michelle Fields: Of Course De Blasio Is To Blame For Slain NYPD Officers on NewsHounds' Facebook page 2014-12-27 18:12:46 -0500
Fox had little time for the slain NYPD officer's memorial but plenty of time to smear Democrats.