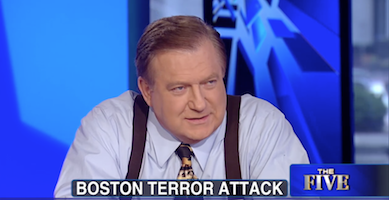 Bob Beckel, the lone "liberal" on The Five, has been fired by Fox News again. This time he was fired for allegedly making a racist remark to an African American coworker.

Fox News has fired “The Five” co-host Bob Beckel on Friday after he was accused of making an insensitive remark to an African-American employee, TheWrap has confirmed.

A source close to the situation told TheWrap that Fox News human resources was informed of an incident on Tuesday evening, did a through investigation within 48 hours, and made a determination that he had to go immediately.

A statement we received today from Douglas H. Wigdor and Jeanne Christensen, the attorneys representing the plaintiffs in a class action lawsuit accusing Fox News of racial discrimination, told a much more offensive story:

In yet another example of the 18th Century Fox mentality, Fox permitted Bob Beckel to remain in his role as a prime time co-host despite his many prior insensitive and racist comments.  All the while, Kelly Wright, the only black male anchor at Fox News, has been relegated to an overnight position.  This time, Mr. Beckel stormed out of his office when our client, a Black IT employee came to service his computer, telling our client that he was leaving his office because he is Black.  To make matters worse, after our client lodged a complaint about Mr. Beckel's racist behavior, Mr. Beckel, in front of Chief Human Resource Officer Kevin Lord, attempted to intimidate our client and persuade him to withdraw his complaint.  Because he would not do so, Fox, in what has now become common place, leaked the story on a Friday to minimize the attention drawn to Mr. Beckel's racist behavior.  Fox also neglected to inform the media of what was actually said, as well as the attempt to convince our client to withdraw the complaint.

Beckel was previously fired by Fox News in 2015 after a long absence from The Five. First, we were told he had had back surgery, then we were told he was in a rehab facility for addiction to pain medication. Then Fox made what may be the world’s most vindictive public statement of termination:

“We tried to work with Bob for months, but we couldn’t hold The Five hostage to one man’s personal issues,” Bill Shine, executive vice president of programming, said in a statement. “He took tremendous advantage of our generosity, empathy and goodwill and we simply came to the end of the road with him.”

Although the alleged incident with Beckel and the IT employee is shocking, Beckel has a long history of on-air bigotry and sexism. Here’s a roundup from my January, 2017 post, when Beckel returned to Fox News:

In April, 2013, Beckel may have beat Trump to the punch by suggesting that we should restrict most Muslim and Chinese students from studying in the United States.

In a discussion about Chinese hackers, Beckel said:

The Chinese are the single biggest threat to the national security of the United States. They have been, they will be and they can wait. They’re very patient. You know what they just did? As usual, we bring ‘em over here and we teach a bunch of Chinamen – uh, Chinese people how to do computers. They go back to China and they hack into us, right?...

He concluded his remarks by saying, “So, China –“ and making a punching motion with an arm gesture that means “F*** you.”

In October, 2014, while discussing a video that recorded catcalls and street harassment as a woman walked around New York City, Beckel said, “She got a hundred catcalls. Let me add 101. Damn, baby, you’re a piece of woman. …She’s a good-looking babe. Wouldn’t you say something?”

Less than a month after rejoining Fox, Beckel suggested Native Americans should trade in their opposition to the Dakota Access Pipeline (DAPL) for a new casino.

So, we will not miss Beckel. He was never much of a friend to Democrats on Fox News, either.

By the way, the Wigdor and Christensen also said more racial discrimination complaints are on the way:

As with our other 22 clients, we intend on holding 21st Century Fox accountable for these actions and will be filing multiple other complaints in other matters next week.  We also intend on updating Ofcom with these new developments as they may be relevant in their consideration as to whether or not to approve the purchase of Sky.

Meanwhile, watch Beckel sound like Donald Trump, years before Trump was a presidential candidate, by calling for a Muslim and Chinese student ban “so that we can at least absorb what we’ve got, look at what we’ve got, and decide whether some of the people here should be gone, be sent back home or sent to prison." It’s from the April 23, 2013 The Five:

Updated at 3:46 PM to reflect corrected statement from Wigdor and Christensen. The original statement said "incentive" instead of "insensitive" in its first sentence.

What RWingers (and – unfortunately – some Libs) don’t understand is that people can change. It happened to Saul on that famous road, it happened to George Wallace, once one of the most racist of racist bigots in American history, and it apparently happened with Byrd. I detect a pattern, here, actually: all three were entrenched bigoted haters who became acceptable human beings after seeing the light. The example I can think of having happened in the opposite direction may be Joe Libermann. But, then, I consider him to be a totally unprincipled opportunist.

On the other hand, Donald Trump has never apologized for his racist birther hideousness and I am still waiting for him to report on that private investigation in Hawaii he boasted about. Also, he promised to release his tax returns.

And no, I don’t think Beckel is part of the Klan. But he has a history of making offensive, racist remarks. I documented them above and with links to video.

Ellen commented 2017-05-20 02:06:18 -0400 · Flag
Which leads me to my next point… vis-a-vis Villainous Chris: Beckel always seemed miserable to me at Fox. Like he couldn’t stand the box he was put in but didn’t have the guts to really break out of it. So he would “rebel” in what always seemed like very childish ways.

The week before he started confronting Watters, I kept thinking how unhappy he seemed and how much bottled up anger he seemed to have.

According to the news reports, the incident that got Beckel fired happened on Tuesday. So maybe he knew he was on his way out and felt liberated to really give it to Watters.

You are right. Becker had his liberal mojo going this past week. I loved his Groundhog Day thing with Watters and it made a great point. The problem for me has always been that Beckel was never a reliable voice for the left or Democrats. When he wanted to be, he could be excellent but so many times he didn’t.

Bonnie Wheeler commented 2017-05-19 18:54:32 -0400 · Flag
I don’t think Beckel was at all a racist. I think that he made comments which were taken as racist. What is wrong with the world today? No more freedom of speech; speech taken out of context, Some looking for something that they can take as an insult? Some people just love the drama. They do this to draw attention to themselves. They could not possibly be insulted by the minor things that they say they are

Sweetee commented 2017-05-19 18:39:28 -0400 · Flag
I am not a Beckel fan but in insinuate that the man is a one time member of the klan is crazy. He actually marched with MLK. Besides all you libs wasn’t it the dems who lionized a former klan grand wizard. AKA Robert Byrd.

truman commented 2017-05-19 18:30:58 -0400 · Flag
Bobby’s brain cells were largely destroyed years ago by copious amounts of alcohol. On his best days, he was a faux Democrat babbling on, just one tiny step above wankers like Pat Caddell.

Bonnie Wheeler commented 2017-05-19 16:32:21 -0400 · Flag
What is Fox trying to do? People really like variety. They find that trying to please all the people all the time can’t be done. A network, which tries becomes very boring.

He’s been trashing Fox, Trump, and The Five idiots for weeks now, even being told repeatedly in his earpiece to STFU on air. He outed Guilfoyle in talks to work for Trump to the Fox sheep.

Now, Fox, who would hire a Klansman, fires him for racism amidst swirling claims of company wide racism. Company looks good, Beckel like shit.

It’s exactly the same play as that statement Fox put out the first time they canned him.

Isaiah Jacobs commented 2017-05-19 15:16:47 -0400 · Flag
Bob has really been slamming Trump and, that grinning buffoon, Jesse Waters on The Five A LOT. I couldn’t believe what I was watching this week. Beckel is a little crazy, but it was worth watching him this week torture Waters.