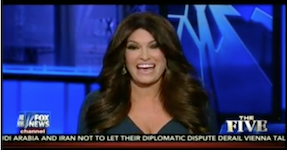 Kimberly Guilfoyle hilariously denied to her Fox colleagues that all her Trump-lovin’ during the Fox New Year’s Eve special amounted to “The Trump Show.” But the evidence proves otherwise.

In fact, Guilfoyle and cohost Eric Bolling were so busy slobbering over Donald Trump that they missed the New Year’s countdown – and then redid it after the Times Square ball had already dropped and 2016 had begun in order to let Trump count down. But even before Trump showed up, there were repeated teases for his appearance. And in the meanwhile, Guilfoyle adopted his campaign slogan by saying, “Later, Republican frontrunner Donald Trump will be here to help us ring in the New Year and make America great again."

I didn't catch her using anyone else's campaign slogan that way.

When Trump finally showed up, Guilfoyle gushed that his wife, Melania Trump, looked “so gorgeous, I gotta tell ya, she would make an amazing first lady of America!”

Apparently, not everyone at Fox News was charmed by that display. The tensions spilled out into The Five, where Guilfoyle and Bolling are cohosts.

Cohost Dana Perino said, “The whole show was built around the Trump interview, and I think that if you’re a candidate, you think, what chance do I have to even be able to have—make an impact if the whole thing is going to be about Donald Trump?”

Predictably, Guilfoyle and Bolling denied it.

“It wasn’t 'The Trump Show!'” Guilfoyle protested. “With all due respect, we hosted it, it was awesome.”

“It wasn’t at all. It was five minutes with Donald,” Bolling claimed. Actually, it was about nine minutes – not counting all the teasers.

“You just seem smaller and more mean-spirited than normal. How charming,” Guilfoyle sneered.

So there’s real tension there.

Watch it below, from the January 4 The Five, via Media Matters.

John McKee commented 2016-01-05 00:33:46 -0500 · Flag
Such fun. Maybe the daily memos haven’t been quite as clear on what every last one of Murdoch’s Minions should truly, sincerely and passionately believe (ie above reading age 9).