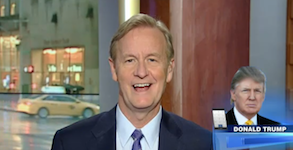 Donald Trump is back on Fox News and both he and host Steve Doocy have professed their friendship with each other.

The fawning interview wasn’t quite what Doocy cracked it up to be yesterday, when he announced that Trump would “talk about his relationship with Fox News.” That “discussion” consisted of the following:

DOOCY: Glad you’re back with us and glad we’re friends again.

TRUMP: We are friends, Steve. We’ve always been friends. It’s great to be back with you.

There was no mention of – much less an apology to – Megyn Kelly whom Trump slut shamed, called “a bimbo” and suggested she was having her period when she called out his sexism during last week’s Republican candidates’ debate.

In a separate interview today on CNN, Trump said that in his phone call with Ailes that supposedly “cleared the air” between them, they didn’t discuss the Megyn Kelly to-do. “It’s not about Megyn Kelly,” Trump insisted.

So what is it about? I suspect it has a lot to do with Trump’s threatened third-party candidacy. That was the first Fox dart thrown at Trump in last week's debate. It also seemed to be Doocy’s real interest in their discussion this morning.

Regardless, it’s more than a little troubling for a presidential candidate and the head of a cable news network (no matter how illegitimate) to be colluding in any way on either coverage or political campaigns or even insults to a host. Or basing coverage on a personal relationship with a candidate. But that’s exactly what this smells like.

After Trump started complaining, Fox dramatically ratcheted down its coverage of the candidate. The channel barely covered Trump's criticisms of the moderators Kelly, Chris Wallace and Bret Baier.

But the motor-mouth Republican candidate began to ease up on his criticism of the channel on Monday morning after Ailes called.

And voila! Trump was on Fox & Friends this morning. There, we were treated to a bit of Trump’s so-called policy positions. Trump’s tax plan? “Simplify the code” and “reduce taxes.” That, and we all need to know that he hires a slew of accountants to prepare his awesomely massive tax returns.

We also got his thoughts on fighting ISIS: “Cut ‘em off at the oil” and “knock the hell out of ‘em.” And “stop the flow of money” through Saudi Arabia.

Watch him below, from the August 11 Fox & Friends and CNN's New Day:

Antoinette commented 2015-08-13 04:55:23 -0400 · Flag
Goofy Doocy has thrown his own colleague Barbie Megyn under the bus. Goofy’s friendship with Trumpster is more important than the Barbie’s.

This cafeteria Catholic cares only about himself and his career, just like the rest of these worthless frauds at this horrid skyscraper in midManhattan.

They would befriend the devil himself if it benefitted them.

All I can do is offer The Donald this sage advice regarding Roger Ailes: Don’t turn your back! Don’t believe me? Witness Bristol Palin, daughter of one of Ailes’ former presidential protégés, snapping at him for saying “I hired Sarah Palin because she was hot and got ratings.” Is Fox News’ president embarrassed by his failure to mentor Mother Grizzly? You betcha!

d d commented 2015-08-11 18:34:43 -0400 · Flag
Regardless, it’s more than a little troubling for a presidential candidate and the head of a cable news network (no matter how illegitimate) to be colluding in any way on either coverage or political campaigns or even insults to a host. Or basing coverage on a personal relationship with a candidate. But that’s exactly what this smells like.
Ellen
————-

Exactly. Can you imagine the fuss from Douchey and the other FOX “news” talking heads if, say, Hillary and the heads of MSNBC and/or CNN came to an agreement that stated the kind of coverage they would be giving her? How outraged the FOXies would be if all Hillary had to do was throw a fit, get a call from the network head and then tweet out what a “great guy” the heads of MSNBC/CNN are?

As to Douchey, he has always been a Trump brown-noser. That Trump would go on F&F and be treated like a good friend by the F&F stooges is not new news.