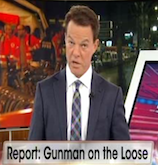 Shepard Smith had something of a hissy fit and then abruptly ended an interview with the New York Times London Bureau chief after he said, “We have to be careful” about responding to warnings from Britain’s MI5 that Al Qaeda is planning mass attacks on west.

Near the end of the breaking news coverage of the French hostage takers and deaths of the Charlie Hebdo suspects, Smith welcomed Steve Erlanger, London bureau chief for The New York Times.

Smith asked, “Steve, what can you tell us about this warning from the authorities there of a possible second western attack to come?”

Smith was referring to a speech by Britain’s MI5 head, Andrew Parker, in which he warned that a strike on the west was highly likely. According to Reuters, the speech was planned before the attacks in France.

Erlanger replied, “Well, we need to be careful in the moments after such a thing…”

“You don’t have to tell me that,” Smith interrupted, already ruffled.

That’s, I hope, true and there are warnings – even MI5, the head of MI5, which is like the British FBI, in a speech yesterday, in which he warned that Al Qaeda in the Middle East was planning larger attacks, including against London. …You couldn’t draw lines between all these things and make them one but there’s no question that this attack (unintelligible) …that it wasn’t just two brothers but they had friends and accomplices has shaken people very, very badly. And there will be lots of questions about why intel didn’t know what was going on, did they take these brothers seriously enough, could this have been prevented? The magazine Charlie Hebdo had been a major target for a long time…

But the only thing Smith seemed to care about was whether Erlanger had suggested Fox was not careful. “I’m very curious about – you said we need to be careful. On what matter did you think we were not careful, based on what you just said and on what we just reported, Mr. Erlanger?”

But while some of us were very curious to know what Erlanger meant, Smith seemed more interested in protecting Fox than in Erlanger’s interpretation of the MI5 warning or even what he had tried to say about Fox.

Erlanger said he had not been listening “very, very carefully.” He added, “I’m not getting in a fight with you…”

“I’m simply saying that – look, you asked me to come and talk to you. I’m telling you what I think I know.” Erlanger said.

Smith interrupted again. “Well, you told me that you thought we needed to be careful. And what I can report to you, sir, is that we’re being very careful.”

Apparently not.  Smith ended the interview and we never did get to find out what Erlanger thought we should be careful about in responding to the MI5 report.

If Erlanger's "careful" remark referred to Smith calling the threatened mass attack a "second" attack and thereby baselessly suggesting that the attacks in France were part of a larger plot, I wish he would have said so. But if he meant something else, I wish he would have gotten right to that, too. He didn't help his cause by throwing it out and not immediately explaining. However, that's no excuse for Smith not to give Erlanger a chance to explain.

We can add Shepard Smith to the growing list of Fox News hosts who don’t want to hear what their own guests have to say.

Watch it below, from today's breaking news coverage.

Richard, if the suits are unhappy with a journalist’s reporting of a story, he or she could face suspension. That’s how the top floor operates.

These third-rate, worthless executives and producers couldn’t produce a rabbit out of a hat.

For what it’s worth, I heard the the phrase “we must be careful” (aka we should stick to the facts) time after time on France24 and it became a sort of liet-motif on all the channels I have access to (even CNN-international).

Actually, it reminded me of the very cautious coverage by everybody – even Fox(not)News – of the Boston Marathon attack.

I was reading on another website (forgot which) and someone said that they thought that Erlanger might have been referring to the idea that not being “careful” after a horrific incident like this will give rise to the far-right movement in Europe (who may seek retaliation on innocent Muslim citizens). I thought that sounded plausible so I went to Erlanger’s twitter account and saw that he had tweeted a link to an article by him and another reporter that warned about there being those in Europe who might use this to incite an “already seething with anti-immigrant sentiments in some quarters, feeding far-right nationalist parties like France’s National Front.”

Perhaps this is what Erlanger meant by “be careful”? Of course, I don’t know for sure if this article was out before or after his interview with the overly-snippy Shep.

Bemused commented 2015-01-10 18:41:21 -0500 · Flag
Personally, I was watching mostly the French channel of France24 ibut did a bit of zapping to other channels during the many lulls in the flow of information. I agree with Hulk that BBC and Al Jazeera – though not perfect – were a lot more responsible than CNN International (aka FoxLite). I can only imagine what the foxy jokers were doing (my tolerance threshold was too low to even want to try watching them). I also appreciated the care with which the hosts and guests tried to keep facts separate from speculation. They were careful to avoid indulging in the sort of un-informed speculation that the foxies have the gall to call “news”, not least “fair and balanced”.

As responsible reporting tends to slow things down, the poor hosts were hard-put to keep interest high. Only occasionally did they give in to the temptation to adopt the Fox(not)News mode of ramping up the adrenaline through speculation and fear-mongering. One blond lady who’d apparently ripped a page from Megyn Kelly’s book was extremely rude to a moderate Imam: she quickly disappeared (thankfully). There was no justification at all for her behavior and I hope never to see her again.

As I wrote in an earlier thread, Charlie Hebdo (and Hara Kiri before it) are/were just a bit too vulgar for my taste. Unlike the foxies, they cannot be charged with trying to ratchet up hatred because they make fun of anybody and everything silly: a bunch of pesky kids who shout “the king has no clothes on”. They cut their teeth on Charles de Gaulle.

Hulk commented 2015-01-10 15:53:00 -0500 · Flag
I just wanted to say I think Shep is getting hyper-sensitive to any accusations of misleading the public with bull shit reporting. ALL the networks did an awful job on the Hebdo reporting, as they are all so obsessed with being “the first” with breaking news. Of course fox-nonsense has such a history with half-truths, lies and off-the-wall nonsense, I suspect Shep was waiting to be called out on it.

I thought Erlanger was making the comment generically, but Shep took it personally. His loss

As for what L Tripp is talking about, I have no clue. A coherent post might help.

Larry Tripp commented 2015-01-10 10:23:39 -0500 · Flag
Erlanger never even attepted to answer a direct qustion. Blaming the person who’s job responsibilities include not letti g an arrogant SOB take over the air, for doing his job is not reporting. What part of who, what, where or why Erlanger supposedly reporti on when he was cut off; oh that’s right you neglected to mention that not only was he a jack ass he did NOT provide the information requested; the only thing he said qbout what he was questioned about was that MI5 is Englands FBI; more evidence that Erlanger is way over his head, MI5 is more comparableto the CIA. He never once mentioned what he was on the air to discus. You really should be professional in you critiques. Don’t be like the nytimes; hire two jack asses to write about one story , because you do not have any professional reporters on staff.

“That’s a shame, Shep was the only non-anchor who was being even mildly professional talking about the attack before this.”

Dear Aria: I definitely believe it’s safe to assume that, in light of the terrorist attacks in Paris, Jabba the Ailes and his boss Herr Goebbels II (i.e. Murdoch) have probably given Shepard Smith the following ultimatum:

“SAY WHAT YOU ARE TOLD TO SAY OR ELSE YOU WILL BE TERMINATED!”

I posted on Twitter (only half in jest) that I wondered if Shep is hypoglycemic. I know I can also get a little testy when my blood sugar is low.

Shep has a history of suddenly snapping at guests. Not sure where it comes from, but it is certainly unbecoming at times.

Aria Prescott commented 2015-01-09 14:22:11 -0500 · Flag
That’s a shame, Shep was the only non-anchor who was being even mildly professional talking about the attack before this. The crap on his show was from his guests.

NewsHounds posted about Shepard Smith Cuts Off New York Times Bureau Chief Trying To Discuss New Terrorism Warnings on NewsHounds' Facebook page 2015-01-09 14:18:16 -0500
We can add Smith to the growing number of Fox hosts who don't want to hear what their own guests have to say.