Didn't you just know it was only a matter of time until Fox News started blaming President Obama for the Boston bombings? On Fox Nation right now, there's a post called, "Telegraph: Boston Bombs: Obama Lulled America Into False Confidence Over Terror Threat."

You don't really need to read the article to get the gist but here's an excerpt:

In his State of the Union address to the American people earlier this year, Barack Obama declared that he was "confident" of achieving "our objective of defeating the core of al-Qaeda".

Although he acknowledged the need to pursue the "remnants" of the terrorist group and its affiliates, the overall message was clear – al-Qaeda was badly degraded, the tides of war were receding and the US was winning this fight that was no longer even officially a war. 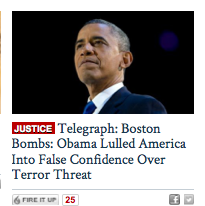 I mean, he abandoned the war on terror to invade Iraq….oh, wait, that was W.

He said he wasn’t really worried about Osama bin Laden’s whereabouts….oh, wait, that was W.

He was on vacation for a month before the attack….oh, wait, that was W.

He gave the order to kill bin Laden. That WASN’T W.

Dear Roger,
Thank you for gathering all together in one place the stupidest of the stupid, leaving the rest of the internet a reasonably safe and sane place for the rest of us….. except maybe for a few of my right-wing nutty nieces and nephews and brother-in-laws, who don’t watch news anyhow because there noses are usually buried in their iphones as they post pictures of themselves drunk and puking up all over somebody lawn somewhere on facebook….

Aria Prescott commented 2013-04-20 15:30:59 -0400 · Flag
Yesterday, I actually heard one of the (admittedly few) Bay Area teabaggers trying to convince people that Obama was in on the attack because the bombers were caught in five days. Apparently, there was no other way they could have been caught so fast.

Honestly, sometimes I wonder what a composite PCL-R for a Fox supporter looks like. How functional they are really is a good question.

truman commented 2013-04-20 12:54:31 -0400 · Flag
@kent brockman. Good point. If only our President had taken his cue from Dumbya. Do a flyover of Boston after the bombing, play a few stanzas on the air guitar and read a children’s story to some first graders. That’s the type of Presidential leadership that gets you on Mount Rushomore II. Or at least in the Fux Noise Hall of Fame.

Fox needs and wants to keep us divided. Anything that has the slightest possibility of a flicker of having the country united as one, even temporarily, must be extinguised immediately.

Richard Santalone commented 2013-04-20 10:47:33 -0400 · Flag
@truman Oh boy, YOU’RE CERTAINLY NOT WHISTLING DIXIE! Remember what happened to the Dixie Chicks when they spoke out against Dumbya Bush? Boy oh boy, DID THEY GET CRUCIFIED IN THE MEDIA ST. PETER’S STYLE! It’s NO ACCIDENT why their next big hit was entitled “Not Ready To Make Nice”, because here is the one fact the rednecks who inhabit FoKKKs Nashun will NEVER, EVER understand: human nature is VERY SIMILAR to the fundamental law of physics: for every ACTION, there is a REACTION. In the same way, when you push people around long enough (especially the Dixie Chicks), sooner or later THEY WILL PUSH BACK!

Oh my! It must be those special hypnotizing powers granted to him by some powerful being. I mean, Hannity keeps calling Obama “The Annointed One”, right?

Homeboy Halligan commented 2013-04-20 08:12:17 -0400 · Flag
You’ve got the two psychotic madmen back to back on primetime Fox that will be attacking the president night after night til the next election blaming Obama for the bombing. This all but insures that the Democrats will take the House!

Oh so true!
All they have to offer is hatred fueled by the fear that they, themselves, do so love to foster and tend …. and then they have the gall to include themselves as citizens of “the land of the brave and the free”.

Their constant fear mongering makes me understand them to be enslaved by their own fear fueled by wilful ignorance.

I guess they really do get my goat!

Kortez Tk commented 2013-04-20 05:32:21 -0400 · Flag
Conservacreeps are all about diversion and blaming, never about making our nation better and stronger, just feeding the rich, like the Koch brothers. They have a hate machine, and it’s how they keep themselves going, along with ignoring the facts, like these kids and their maladjusted father came over in 2003, on whose watch?

Seems it was Dumbya who “lulled America into false confidence over the terror threat” . . .

@ Brian Hicks: “It always makes me laugh when these fools make demands like this with an ‘or else’ tone when everybody knows they are full of shit.”

Becky’s just channeling his inner Donald Trump — remember when Trump “made” the President produce his long-form birth certificate, and took credit for doing so afterward?

“Oh yeah—and Beck has already called for the immediate impeachment of Obama.”

We were discussing that over on PoliticusUSA:

It seems there’s no end to what rightwingnuts will call for President Obama’s impeachment for — the use of Air Force One, signing healthcare reform legislation into law, making recess appointments, offering a congressman a White House job, etc.

But, let a white GOP president wiretap US citizens without warrants, out a covert CIA agent, start two wars based on fake intel, or play air guitar while a major US city drowns — and any talk of ACCOUNTABILITY, let alone impeachment, is considered “treasonous” . . .

Kent Brockman commented 2013-04-19 23:17:58 -0400 · Flag
We were told George W. Bush had beat the Bad Mooslims so Completely there was no need to go after OBL any longer, and all the RWers agreed it was so. Bush even joked about Turrists hiding under hiz podium. Better have a talk with Dumbya Fux.