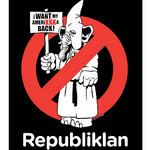 There’s a major race scandal broiling around incoming House Majority Whip Steve Scalise (R-LA). It involves revelations of his paid speech to a white supremacist group and threats from that group’s founder, David Duke, to name other politicians he has ties to if the Republicans throw Scalise under the bus. But you probably don’t know about it if you only get your news from Fox.

As Huffington Post notes, the news of Scalise’s attendance at a 2002 meeting of the European-American Unity and Rights Organization, a group founded by former Ku Klux Klan leader David Duke, went viral this week. Scalise’s claim not to know whom he was speaking to is not exactly being accepted without question. Nevertheless, House leadership is standing by Scalise, at least for now.

One can imagine the kind of coverage on Fox News this would get if a Democratic leader were caught having addressed the New Black Panther Party, e.g. But a white Republican leader? Not so much.

From a Mediaite post time-stamped about two hours ago:

(Fox News) mentioned the Scalise story once since it broke, during the America’s Newsroom 9 a.m. hour, for a brief 20-second segment that included Scalise’s initial response. That’s it so far.

My guess is that Fox was waiting for a signal from the GOP as to how to react. Now that the Republican leadership has taken a stand on behalf of Scalise, Fox almost surely will, too. In fact, I’ll bet that Scalise will be getting a nice dose of Republican Rehab on Fox sometime within the next 24 hours, quite likely on prime time tonight.

Kevin Koster commented 2014-12-31 05:00:52 -0500 · Flag
I believe there was some discussion of this over the last day, but it was purely in context of whether John Boehner should be voted out as Speaker. In other words, the idea was that the “conservative base” (meaning Fox News viewers and AM listeners) would reject Boehner if he didn’t stick with Scalise. Of course, they’re already planning to reject him because they believe he’s been working too much with President Obama. (Which tells you just how far off to the right the hardliners have gone at this point.)

Then they of course brought up all the false comparisons they could about Robert Byrd or whatever Democrat they wanted to attack, which looks like the Fox News Line of the Day for tomorrow or later. Idea being that hey, Scalise didn’t do anything any more wrong than stuff the evil Dems did, and look what they did to poor Trent Lott over so much less than this! And the simple answer they’d rather not hear is – “Your guy did an event with a modern Klan group in 2002. The complaints you’re bringing up are from decades before then. Do you have anything from within this century?”

Aria Prescott commented 2014-12-31 02:54:07 -0500 · Flag
The GOP is already downplaying this, while trying to figure out how to bring out the corpse of Robert Byrd. Because a Democrat who died in 2010 has much more bearing than the GOP defending this kind of crap today.

Way to go, GOP! You haven’t even taken control of both houses yet, and you’re ALREADY making the news — though likely unintentionally.

(This is what you voted for. Thanks teabaggers.)

Jane S commented 2014-12-30 22:49:25 -0500 · Flag
To be fair, it wasn’t a paid speech. He went there as a state rep while he was on some crusade or other drumming up support for lower taxes in Louisiana. He may or may not have known about Duke’s involvement in the group, although that seems unlikely, but there’s no chance he didn’t know what “European American Unity and Rights Organization” meant.

Michael Steele, former RNC chairman, filled in for Chris Matthews on MSNBC tonight, and he presided over a pretty good discussion with Ed Rendell and a GOP “strategist” apologist. Steele was on Rendell’s side in thinking Scalise should resign or get kicked out of GOP House leadership.

The GOP strategist kept shrieking “Scalise isn’t a racist!” which may well be true, but that isn’t the point. Most GOPer pols aren’t actually racist (some are) but they’ve long been more than willing to court racists if they vote.

Rendell kept pointing out that Trent Lott had to resign some years ago for a much less egregious thing.

truman commented 2014-12-30 17:57:54 -0500 · Flag
Fux Noise has devoted six years to no avail trying to transform Bill Ayres from a casual acquaintance into a close personal friend of the President.

Rehabbing a white supremacist sounds like a job for KKKlannity.

NewsHounds posted about Fox Spends 20 Seconds On GOP Whip Scalise Palling Around With A White Supremacist Group on NewsHounds' Facebook page 2014-12-30 17:06:57 -0500
Now that the GOP has taken a stand on Scalise's behalf, I'm willing to bet that Fox will, too. I'm expecting a hefty dose of Republican Rehab within the next 24 hours.