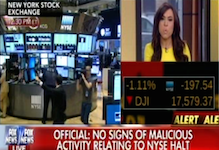 Fox’s Andrea Tantaros didn’t let a little thing like no evidence stop her from fear mongering that today’s New York Stock Exchange suspension of trading could be a “trial run” for an ISIS cyberattack. She also laughably claimed, “I don’t want to incite panic.”

Far be it from me to declare that computer issues on the New York Stock Exchange that coincided with computer issues at United Airlines and the Wall Street Journal were NOT cyberattacks. But it’s supposed to be a news network’s job to report news and facts and not present inflammatory speculation as such.

Cohost Sandra Smith announced at the beginning of the segment that the stock exchange has called the problem “a computer glitch.” She also reported that a “senior U.S. security official” has said, “Nothing indicates anything malicious at this time.”

Fox’s Charles Payne started the conspiracy theorizing. He called the shutdown “unnerving, if you will, for this thing to be down so long and still no real good clear official explanation.” When Smith wondered if a circuit breaker had been accidentally triggered, Payne said, “I would lean more” toward hacking. Not that he had any more information or even any apparent cybersecurity credentials.

But leave it to “Punch” Tantaros to ratchet up the evidence-free fright.

TANTAROS: Whether or not this is a hacking or whether this is just a simple technical glitch, it certainly seems like it could be a trial run for anyone who wants to do harm to an American business, the stock exchange. You mentioned United Airlines. This is almost a trial balloon to see what would happen if you did try and hack our systems and I mean the uncertainty that it could cause – I mean, we saw thousands of travellers today grounded. Now we see thousands of people – hundreds of thousands affected by this, whatever this technical glitch or this incident is.

And this is a time… when James Comey, the FBI director, is up on Capitol Hill testifying that we can’t even look and see these encrypted websites and email accounts that ISIS are using. So I don’t want to incite panic but we hear constant reports out of Washington, D.C. that the cybersecurity issue is the biggest problem and we have not been tested in that way.

Rather than shoot down this irresponsible commentary, Payne helped validate it. “We cannot write that off,” he said.

This from the network that bent over backward to avoid calling the Charleston church massacre a racial attack, even after evidence had been found to indicate that it was.

To her credit, Sandra Smith said technical glitches do happen and that “this has happened” before. However, she never specifically challenged Tantaros’ irresponsibility and she should have.

Watch it below, from today’s Outnumbered.

Daniel Noel commented 2015-07-09 22:07:42 -0400 · Flag
No big deal! Fox has repeatedly televised the Twin Towers’ terrorist controlled demolition while steadfastly affirming that it was obviously due to the earlier impact of Osama bin Laden’s hijacked airplanes. Trust Fox at your own risk.

However, this is not an actual news network we’re talking about . . .

That’s all FOX has. Be afraid and FOX and the feckless repubs and corporations will ride in to rescue you…..until the next time there’s something to hype more FEAR FEAR FEAR!!!!!

NewsHounds posted about Fox’s Tantaros Baselessly Suggests NYSE Shutdown An ISIS ‘Trial Run’ on NewsHounds' Facebook page 2015-07-08 14:53:58 -0400
From the network that bent over backward to avoid calling the Charleston massacre a race crime.