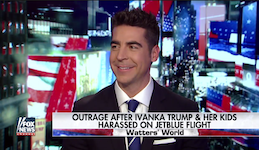 There’s no way to look at Fox News host Jesse Watters’ ambush of the man who accosted Ivanka Trump – and Watters’ thinly-veiled suggestions that the partner should be fired - as anything but an act of partisan bullying and revenge. What’s just as disturbing is that Watters was going after someone for engaging in exactly the kind of behavior that is Watters’ stock-in-trade.

In case you missed it, Hunter College professor Matthew Lasner made news last month after he and his husband were kicked off an airplane for allegedly harassing Ivanka Trump and her husband. Lasner tweeted about the incident, saying his partner “express[ed] displeasure about flying w/Trumps.” Previously, Lasner had tweeted about his husband “chasing them down to harass them. #banalityofevil.”

Whatever you think of the behavior, it’s hardly the kind of news story that merits investigative reporting, much less an ambush. But clearly, Watters' goal was to get even, not to elicit any information or news.

Watters started by showing the audience photos of the men who dared to cross a Trump. “The outrage sparked a petition calling for Professor Lasner to be removed from Hunter College," Watters said. "So Watters World went to the professor’s school to talk to some of the students and also caught up with his husband, Dan, the main culprit.”

Watters began by asking a number of Hunter students about Lasner and "just asking" if he should be fired. As usual, we have no idea from the highly-edited segments how many people Watters spoke to actually condemned Lasner. But nearly all the clips we saw showed students in support of him getting fired.

Apparently, neither Watters nor Fox thinks there’s anything wrong for a news person to engage in exactly the kind of behavior Watters was trying to punish Lasner and later Goldstein for. For example, there was the time Watters followed, ambushed and harassed then-Think Progess' Amanda Terkel (now a senior reporter and managing editor at Huffington Post) for having posted criticism of Bill O’Reilly (in a story she picked up from us, coincidentally). There was also the time Watters went all the way to Massachusetts to mock and harass an elementary school official because the school banned Christmas items from its Gift Room. That man called the police on Watters. The National Organization for Women also called the police on Watters after he tried to humiliate the attendees with such questions as “Have you ever burned your bra?” and “Are you married? …Single, ready to mingle?”

But when it’s a Trump being treated the way Watters treats others, that behavior is an outrage that must be confronted. So, after we saw Watters going after Goldstein's partner, Watters went after Goldstein, himself.

Goldstein made it clear he didn’t want to talk to Watters but that didn’t put a crimp in his goonery. Watters displayed a photo of Goldstein, just to make sure viewers knew what he looked like, as Goldstein pulled a jacket hood over his face. Then Watters tried to bully Goldstein: “Do you regret verbally abusing Ivanka Trump on the plane? You harassed a woman with her baby on a flight. Are you proud of that? Real class act, aren’t you? Now you’re afraid to show your face? I’m giving you an opportunity to apologize, sir.” Sure he was.

Afterward, Watters was joined in the studio by Fox’s Bernard McGuirk. You may recall that McGuirk, of “nappy-headed ho” fame, loved it when Donald Trump offered to pay the legal fees of a guy who sucker punched and threatened to kill a black protester at a Trump rally.

McGuirk literally applauded Watters and shouted, “Way to hold him accountable, Jesse! This spineless, sore loser, the cry-bully that this guy is.”

“What a coward,” Watters smirked. “The clown couldn’t even show his face. I think that says everything.

By the way, when Gawker gave Watters a taste of his own medicine, guess how he reacted?

Watch Fox do Trump’s dirty work below, from the January 7, 2017 Watters World.

B W commented 2017-01-09 09:48:59 -0500 · Flag
What’s really sad is you know the camera people they enlist to help this jerk’s segments must cringe when they get word they have to work with this guy. Just looking at his smirk is disgusting.

The reality here is that Watters has made bullying his stock in trade for several years now. He’s frankly really taking chances these days when he continues to push it with people, particularly when he is on someone else’s private property. He’s risking arrest at the very least in many cases.

But clearly Watters thinks he can get away with it because, hey, he works for Bill O’Reilly and Fox News and he can do whatever he wants, right? Because this is The Year of the Bully!