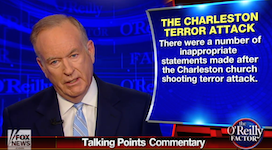 Bill O’Reilly has appointed himself Chief Decider on the Dos and Don’ts of how to react to the Charleston shooting. And rather than own up to how right-wing rhetoric may have played a role in inflaming shooter Dylann Roof, O'Reilly absolved Fox News by declaring that “far left rhetoric” is “far more hateful."

Charleston Reaction Police Chief O’Reilly started out with the approved comments: They included those from the family members of the victims, CNN’s Michaela Angela Davis and Republican Senator and presidential hopeful, Rand Paul.

Paul’s O’Reilly-endorsed comment was, “There’s a sickness in our country. There’s something terribly wrong but it isn’t going to be fixed by your government. …It’s people not understanding where salvation comes from.”

“American society has veered away from moral judgments into a world where everything can be justified with an excuse,” O’Reilly added. As if racial violence is something relatively new.

But then it was time for the list of who’s been naughty.

First, Hillary Clinton, for saying that “the public discourse is sometimes hotter and more negative than it should be. … I think we have to speak out against it.” She gave Donald Trump as an example, for saying “some very inflammatory things about Mexicans.”

Clinton was obviously referring to Trump depicting Mexican immigrants as druggies and rapists. But O’Reilly claimed that Clinton was referring to the fact that Trump wants to build a wall to stop illegal immigration. “She’s introducing a totally unrelated situation to the terrorism in Charleston," O'Reilly argued. "The only thing I can think of is she’s trying to mobilize Hispanic support.”

So, first O’Reilly mischaracterized what Clinton said, then he attacked her over what she didn’t say.

Next up “the race hustlers.” Did O’Reilly mean any of the Fox stable of race baiters? Of course not. He meant his former colleague, Marc Lamont Hill, who was shown in a brief clip saying “the source” of the problem is “white supremacy.”

In the first place, so what? Lamont Hill didn’t say anything about shooting whitey or instating black supremacy. And it’s not like he represents any governmental agency.

But in the second place, Megyn Kelly did fear monger about the Black Panthers sweeping across American inciting violent acts. She did it right on The O’Reilly Factor, as a matter of fact, though on a night Bill was absent. As she was promoting her bogus accusations that the Obama DOJ had failed to prosecute some New Black Panther Party members for voter intimidation (even though no voter intimidation had been reported) out of racial preference, Kelly said, “Well, think about that. … Now you’re going to have instances like this where Black Panthers and others can go to the polling stations and do this if they so choose. And they just basically are gonna get a pass because while it’s not an official thing, it’s been made very clear to all the rank and file voting rights attorneys in the DOJ those cases are not to be pursued.”

If O’Reilly ever held up Kelly as a race hustler, I must have missed it.

“That kind of lunacy makes a mockery out of serious people trying to bridge the gap of understanding between black and white Americans,” O’Reilly continued. “What we need here is serious analysis and honest discussion about differences, not some phantom white supremacist madness.”

O’Reilly went on to attack Washington Post columnist Eugene Robinson for his “fanatical ideology” of saying, “The flames of this fire are fed quite often by right-wing rhetoric” that’s “all over the airwaves.”

O’Reilly shook his head in disgust. “Mr. Robinson, who works for the Washington Post, makes a living out of demonizing conservatives. …Right wing rhetoric, yeah that’s the ticket, that’s what’s causing all of these mass murders.”

Sorry, Bill, but you’re in no position to be pointing fingers about making a living demonizing people. You let me know where Robinson or anyone else has demonized someone as much as you demonized "babykiller" Dr. George Tiller – who, like the Charleston victims, was later assassinated by a right-wing ideologue while in church. And while you do occasionally make a genuine attempt to “bridge the gap of understanding between black and white Americans,” you also spend plenty of time promoting racial hostility. In fact, I remember when you said about violence in Chicago "It’s not about gun control, it’s about race."

Nevertheless, despite calling Robinson “a fanatical left-wing individual,” O’Reilly went on to say that “far left rhetoric” is “far more hateful these days than what the hard right puts out.”

Then, after questioning whether President Obama and the anti-gun lobby really want to stop gun crimes,” O’Reilly declared, “This country is somewhat united to fight terrorism abroad. Now we have to come together and fight it at home.”

Watch it below, from The O’Reilly Factor, on June 19.

Stochastic terrorism is the use of mass communications to stir up random lone wolves to carry out violent or terrorist acts that are statistically predictable but individually unpredictable.

Other than that, he’s still full of sh*t.

Anonymous commented 2015-06-21 15:12:26 -0400 · Flag
My jaw dropped when I saw how blatantly O’Reilly distorted Hillary’s reference, exploiting Hillary’s vagueness to displace the focus of Hillary’s criticism to something conservatives can defend (a border wall),.

O’Reilly also figuratively photo shopped his own take on the border wall story, which in O’Reilly’s original interview with Trump was incredulity that Trump could force Mexico to pay for the wall. O’Reilly later in that interview summarized Trump’s position as “destroying” Mexico. So O’Reilly in his latest talking points hides his own previous criticism of Trump’s remarks.

As far as the relationship between Trump’s rhetoric and domestic terrorism, only Roof knows if there was direct causation. But even if the following sequence of statements is coincidental, it illustrates the victimization-saturated atmosphere out of which both a Trump and a Roof precipitate. An ugly synchronisity:

June 17 Dylann Roof on blacks: “You rape our women”

Bemused commented 2015-06-21 12:36:48 -0400 · Flag
I’ve been hearing a lot of talk about the idea that better mental health care was better than better gun control. Funny thing is that nobody’s saying anything about where the money for that’s supposed to come from. Methinks the NRA could protect its patch ($$$$$$) by offering free psychiatric treatment to all gun owners, particularly those with weapons of mass destruction like those AK whatevers, rapid-firing anything, etc. I think the NRA can be expected to understand its “market” of loonies a lot better than government and taxpayers wouldn’t have to pay one cent.(pinch, pinch) (sorry, I was daydreaming ).

NewsHounds posted about Bill O’Reilly: The Charleston Reaction Police on NewsHounds' Facebook page 2015-06-21 09:00:12 -0400
O'Reilly laughably claims that “far left rhetoric” is “far more hateful these days than what the hard right puts out.”