To Bill O’Reilly, Torture Is Part Of ‘Traditional America’ 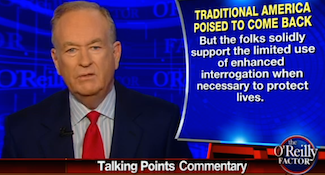 Bill O’Reilly thinks “traditional America is poised to come back.” One of those beacons of hope? The fact that “the folks solidly support” some forms of torture.

In his Talking Points commentary last night, O’Reilly credited much of the resurgence of traditional America to his recent "single-handed" victory in his 10-year War on Christmas. Then, after a brief plug for his latest book and another victory lap for “Jessica’s Law,” a pet O’Reilly cause that imposes harsh mandatory sentences for child molesters, O’Reilly got to torture:

As far as the war on terror goes, the media went wild over the Democrats condemning coerced intimidation. But the folks solidly support the limited use of enhanced interrogation when it’s necessary to protect American lives. Americans were not persuaded by the anti-CIA campaign, all the polls say that. Support for the U.S. military remains very high. Support for less government is growing as voters demonstrated last Election Day.

OK, we get that supposedly pro-life O’Reilly supports torture. But traditional American value it ain’t. Writing in USNI News, an online publication for the U.S. Naval Institute, Cmdr. Daniel Dolan, USN (Retired) noted that America’s humane treatment of prisoners of war started in the Revolutionary War:

(D)uring the U.S. Revolutionary War— with daily reports of heinous acts being committed by the British and their Hessian allies—John Adams wrote that despite being harrowed “beyond description [by the reports] . . . I know of no policy . . . but this—Piety, Humanity, and Honesty,” David Hackett Fischer cited in his book Washington’s Crossing. That came to be known by America’s Founding Fathers as the “Policy of Humanity.”

George Washington and other “American leaders believed that it was not enough to win the war. They also had to win in a way that was consistent with the values of their society and the principles of their cause. . . . American leaders resolved that the War of Independence would be conducted with respect for human rights, even of the enemy,” wrote Fischer.

That policy set a precedent that continued for decades as a key tenet of the American way of war—at least until 2001.

Senator John McCain is a good traditionalist. Unlike O’Reilly, McCain served this country, a traditional kind of tradition if ever there was one. Not only that, McCain fought the war that O’Reilly got an educational deferment to avoid. Furthermore, McCain has personal experience of being tortured as a prisoner of war. In a recent television appearance, McCain said that defending “enhanced interrogation” is “rewriting history.”

“You can’t claim that tying someone to the floor and have them freeze to death is not torture,” McCain said on CBS’ “Face the Nation.” “You can’t say 183 times someone is waterboarded — and, by the way, on waterboarding, it began with the Spanish Inquisition. It was done during the Philippines War. We tried and hung Japanese war criminals for waterboarding Americans in World War II.”

So go ahead and take a stand for torture if you want, Bill O’Reilly. But don’t you dare try to call it a traditional American value.

Watch O'Reilly try to make torture all American in the video below, from last night's The O'Reilly Factor.

NewsHounds posted about To Bill O’Reilly, Torture Is Part Of ‘Traditional America’ on NewsHounds' Facebook page 2014-12-19 13:23:26 -0500
In reality, the humane treatment of prisoners is a doctrine going back to the U.S. Revolution.