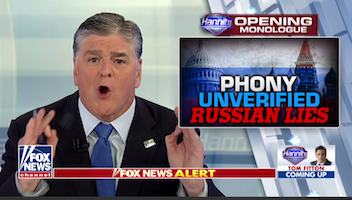 Sean Hannity was so unhinged last night that I have to think he’s very, very worried about the 12 recordings prosecutors recently obtained of Michael Cohen speaking to members of the media.

I have long suspected that the reason Cohen claimed Hannity as a client had to do with a desire to withhold material from investigators, not because there was any substantive lawyer/client privilege. In April, I noted that attorney Michael Avenatti predicted that material seized in the FBI raid on Cohen would prove “very embarrassing” to Hannity.

Also in April, the month he was reported to be a Cohen client, I noted that Hannity acted like a cornered animal desperately trying to distract with an epic bout of Clinton-centered whataboutism. That’s exactly what Hannity looked and sounded like last night. Only worse, if such a thing is possible.

After raging against the Russia investigation, Hannity demanded that Donald Trump reveal the redacted (i.e. classified or sensitive) information in the FISA application for surveillance of Carter Page. Not because there's any compelling public interest but in order to retaliate against those who care about Russia’s interference in our 2016 elections and are not part of the Cover-up Caucus.

HANNITY: I am calling for all of this warrant to be unredacted.

The president can do this and according to my sources, if the final FISA warrant is released, Rod Rosenstein is finished as his role—in his role as deputy AG. But now because of the blatant abuse of power that took place at the highest levels of your government, the Trump administration rightly tonight is taking important steps and calling for certain Obama era officials to be stripped of their security clearances. This should have happened a long time ago, knowing what we now know.

Then Hannity began weaving an Infowars-type conspiracy theory that pushed Hillary Clinton as a Russia collaborator who, along with others “at the highest levels of our government” hoodwinked judges into investigating Trump:

Robert Mueller, this is your collusion story. Robert Mueller, maybe you want to get your pit bull Andrew Weissmann on this. Hillary Clinton, the DNC, and the paid-for Russian lies to rig an election and lie to the American people, all done at the highest levels of our government.

Literally using a warrant process and lying to judges and the bulk of the information judges are fed so that they can spy on an opposition party candidate associate is full of Russian lies, so maybe you’ll have a little more time on your hands and go after if—I may—these lies that were bought and paid for by Hillary to Russia, all designed to propagandize the American people. Let me put it another way: lie to the American people.

Watch Hannity's ravings of Donald Trump’s bedtime BFF and “unofficial chief of staff” below, from the July 23, 2018 Hannity, and ask yourself, what is he so deserpate to cover up?

Thx4 Fish commented 2018-07-25 12:15:26 -0400 · Flag
Holy Sh*t. I am frankly amazed a man his age has such impressive lung capacity. There was no pause, there was no break to take a breath, just a full on 15 minutes of emotionally wrought ranting. (I wonder how long he can hold his breath?!!) There needs to be a new category for this at the Golden Globes next year: Cable News’ Best Outrage Rant by a non-journalist-or something like that.

Calm down, grandpa. You sound like you are about to cry. Insiders are laughing at your emotional rant. We are taking bets that Tucker Carlson takes your time slot. We also are betting that your radio syndicators will drop you like a hot coal.

The Stop Hannity Express says Pie’s dirty linen goes back many, many years. We told the masses about his real estate deals in Georgia a few years ago. We added that Pie earned extra money in other business ventures with the help of others in the game. We said everything he’s done would become public knowledge.

Something major is coming down the pipeline, and it will be embarrassing for Pie, Merri Jill, their two children, his sisters, nieces and nephews, the Shaws, the Rhodes, friends and associates.

Kevin and Sam Sorbo will be the first people to be called on the carpet with their association with Pie.

We are taking bets to see who gets your office when you vacate it. Would 6 moving boxes work for you?

Eyes On Fox commented 2018-07-24 20:13:42 -0400 · Flag
Considering how close Hannity is to The Donald I have to wonder if he’s projecting our Snowflake-in-Chief’s fears. Unsurprisingly, Hannity is parroting Snowflake-in-Chief’s crackpot conspiracy theories smearing those investigating his corrupt campaign. In other words, like Trump, Hannity is acting like he’s defending a guilty party. Innocent people don’t continually wet their pants.

Does Hannity suppose multiple investigations of Hillary will eventually yield results? It didn’t work out for their #Benghazi conspiracy theory investigations which ended up embarrassing the GOP.