Megyn Kelly And Newt Gingrich Go At It Over Trump: 'You Are Fascinated With Sex,’ Gingrich Accuses 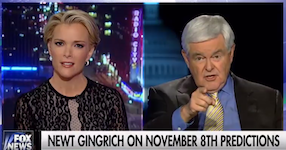 Megyn Kelly and Newt Gingrich had a very nasty confrontation over Donald Trump. Gingrich, of all people, accused her of being “fascinated with sex," meaning she spent too much time covering accusations of sexual assault against Trump. She told him to “take your anger issues and spend some time working on them.”

KELLY: All of the moves that have been on this [electoral] map over the past three weeks – by Larry Sabato, by Cook, by the Fox News decision desks - these are non-partisan outlets that are just trying to call the electoral…

GINGRICH (interrupting): They’re not non-partisan outlets. Every outlet you described is part of the establishment.

KELLY: Fox News? Really? Are we? I don’t think so.

After some more back and forth, Kelly suggested that Trump’s dismal polling is his own fault and not the result of any pollster bias or skewing, as Gingrich suggested. She noted that Hillary Clinton’s poll numbers sank in early September but began climbing again after the first debate.

KELLY: You know what happened. He had a rough first debate, he took the bait on Alicia Machado, he stayed in that trap for a week. The Access Hollywood tape came out which was not produced by Hillary Clinton. That was Trump on camera, talking about grabbing women by the...

Gingrich interrupted. He was clearly angry now and probably taken aback at being challenged this way on Fox. “I get it. I know where you’re coming from,” he sneered. He complained that the networks gave a disparate amount of coverage to Access Hollywood and Clinton’s “secret speeches.” He said, in all seriousness, “You don’t think this is a scale of bias worthy of Pravda and Izvestia?”

“If Trump is a sexual predator, that is…” Kelly began.

“He’s not a sexual predator,” Gingrich snapped. “I am sick and tired of people like you using language that’s inflammatory, that’s not true.”

“Excuse me, Mr. Speaker. You have no idea whether it’s true or not,” Kelly retorted.

“Neither do you,” Gingrich shot back.

He continued, “When you used the words, you took a position and it’s very unfair of you to do that, Megyn. I think that is exactly the bias people are upset by.”

“I think that your defensiveness on this may speak volumes, sir,” Kelly replied.

KELLY: What I said is if Trump is a sexual predator, then it’s a big story. And what we saw on that tape is Trump himself saying that he likes to grab women by the genitals and kiss them against their will. That’s what we saw. Then we saw 10 women [I believe it’s now 11 women] come forward after he denied actually doing it, at a debate, to say that was untrue, ‘He did it to me,’ ‘He did it to me.’ We saw reporters, we saw people who had worked with him, people from Apprentice and so on and so forth. He denies it all, which is his right. We don’t know what the truth is.

If you ask me, Kelly was being charitable to Trump here. Because when 10 or 11 women come forward to confirm what Trump had already bragged on a hot mic about doing, the evidence is pretty damning.

“As a media story, we don’t get to say the 10 women are lying,” Kelly continued. “We have to cover that story, sir,”

“Sure. OK,” Gingrich said nastily. Then he complained again about the disparate coverage of Trump’s sexual misconduct vs. Hillary Clinton’s secret speech.

As if Gingrich, who led the impeachment of President Bill Clinton because he lied about having sex (during a time Gingrich cheated on his own wife), wouldn’t have loved it if Fox spent 24/7 covering sexual assault accusations against a Democrat. In April 1998, Gingrich announced, “I will never again, as long as I am speaker, make a speech without commenting on this topic,” meaning Bill Clinton's affair with Monica Lewinsky.

But now, in what looked a lot like a bit of projection, Gingrich accused, “You are fascinated with sex and you don’t care about public policy. That’s what I get out of watching you tonight.”

Kelly denied it. “You know what, Mr. Speaker. I’m not fascinated by sex. But I am fascinated by the protection of women and understanding what we’re getting in the Oval Office and I think the American voters would like to know,” she said.

“And therefore we’re going to send Bill Clinton back to the East Wing because, after all, you are worried about sexual predators,” Gingrich countered.

Then Gingrich bizarrely started demanding that she use the words “Bill Clinton, sexual predator.”

Kelly did not. She said she has covered “the Clinton matter” also and added, “He’s not on the ticket.” Refusing to back down, she said, “Polls also show that the American public is less interested in the deeds of Hillary Clinton’s husband than they are in the deeds of the man who asks us to make him president, Donald Trump.”

Then she said, “We’re going to have to leave it at that and you can take your anger issues and spend some time working on them, Mr. Speaker.”

Besides the jawdroppingness of this discussion, it has serious implications about the fissures at Fox News. I'll have more on that in another post.

What are your thoughts about this?

Ellen commented 2016-10-27 02:10:19 -0400 · Flag
B W, I give Kelly props for this segment. But one confrontation with Gingrich does not a truly fair and balanced journalistic crusader make. Sure enough, tonight, Kelly was back to her old self and, believe me, if the people who think she’s so fabulous now were watching, they’d have been very disappointed.

Anonymous commented 2016-10-26 12:47:39 -0400 · Flag
Occasionally Kelly, like O’Reilly, positions herself as a reasonable moderate in contrast to some of her alt-right colleagues, even though in the big picture she and the corporation she works for generally enable the alt-right. But O’Reilly doesn’t have a cause as heartfelt, consistent, or courageous as Kelly’s feminism.

The suggestion that Fox News is part of the establishment—Trump is expressly not completely satisfied with Fox—is consistent with competition heating up within the right wing media, partly along pro vs. anti-Putin lines. In their recent interview with Gov. O’Malley, Tucker & co. took umbrage, implying that the label fascism was no more appropriate for Trump than the label communism was to O’Malley’s side; but here we have Newt saying the main stream media is "worthy of Pravda and Izvestia”. What an insult to the truth, Newt! Trump is more in line with a Russian dictator than any major American candidate since Henry Wallace. Russian propagandists have learned from Fox to be WAY more clever and devious than the clumsy old communist Pravda.

B W commented 2016-10-26 11:56:22 -0400 · Flag
I thought Kelly would actually wait until the election was over to resume bashing Trump, but she must have her guests lined up for this week and figures she can get one last week in without a problem/or losing any pro-Trump guests before he goes down in flames.

Bemused commented 2016-10-26 11:26:47 -0400 · Flag
@ B W: spot on. And it’s clear that she’s not expecting to be recruited for Trump TV. The Donald doesn’t like his women to be servile, only surprised when he grabs hold of whatever part of their body is nearest. Why do I get the idea that Megyn may be a black belt in something?

B W commented 2016-10-26 09:32:57 -0400 · Flag
Pretty clear what Kelly is doing here. She knows Trump is finished, so she can resume bashing him with no danger he’s going to be elected. Look back when the election was in doubt, how she kissed his rear end for an interview, did the same for his daughter, and was bashing Hillary. Now, people will give her credit for this, which is crazy.

Eyes On Fox commented 2016-10-26 08:46:32 -0400 · Flag
I don’t watch Megyn regularly (or any of Fox’s nightly line up of pundits) but in fairness to Newt I didn’t see this coming either. After several splats with Trump during the primaries, she seemed to have settled down into her traditional Fox role of spinning for the Republican nominee.

Many pundits on Fox News are having a ‘Rovian moment’. Recall Rove infamously on election night refusing to accept Fox’s own projections of Romney losing? Megyn had to stroll down to the forecasters’ office on camera for an explanation.

In a previous post I commented on Doocy unskewing the polls. Here we have Newt doing the same. It’s popular conservative propaganda to bash the mainstream media for biased polling because they’re in the tank for the Democrat. Rove’s mistake was swallowing his own propaganda. Is Newt doing this here or just angry he’s in the Fox News bubble yet Megyn isn’t fulfilling her expected role by playing along?