Meghan McCain: ‘It Makes Me Happy’ That Andrea Mitchell Is ‘Uncomfortable And Miserable’ Covering Trump 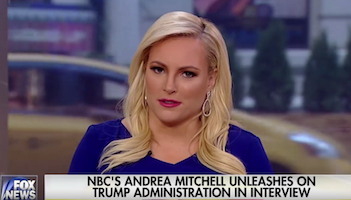 Fox News responded to Andrea Mitchell’s criticisms of the Trump administration’s assault on truth, knowledge and freedom of the press in its typical way: by ignoring the substance of her remarks and smearing her.

After Mitchell dared to criticize the Trump administration, the five Outnumbered cohosts were a vision of biased hypocrisy as they spent four minutes throwing stones at her from their glassiest of glass houses at Fox News.

In a clip, Mitchell said, “I have never seen anything like this where people just flat-out lie. I’m not talking about the president now. ... You know, black is white and white is black, and they mislead you. And it’s really disconcerting to see the podium in the White House briefing room being used to mislead or misdirect or obfuscate.”

Rather than address the inconvenient truths of Trump’s dishonesty, McCain immediately changed the subject to paint Mitchell as the dishonest one: “And while Mitchell admits Clinton made mistakes on the campaign trail she appeared to show sympathy for her.”

Next, we heard a clip of Mitchell arguing that the Clinton press corps was no “support group.” Mitchell said, “We had very little contact. We were harassing her and, you know, shouting questions at her all summer long about the private server.”

McCain whined, “OK, I’m gonna try and keep my composure on this one.” She claimed that when the Clinton campaign wanted a friendly interview, Andrea Mitchell was the first person they wanted to go to.

That’s funny because when the Trump campaign had problems, they immediately turned to Fox News for friendly interviews.

The show’s #OneLuckyGuy, Jesse Watters, sneered, “Everybody lies in Washington. Andrea’s been there for 30 years, maybe 40 she’s just waking up to it? Please.”

Cohost Trish Regan joined the bashing. She claimed MSNBC, the majority of media and Mitchell were personally invested in wanting a woman and a Democrat elected.

What about Fox News? No one at Fox was personally invested in wanting Donald Trump as President?

Cohost Harris Faulkner lectured: “If she’s gonna take shots at people in the administration, she needs to name names and come up with some examples.”

Actually, Mitchell did provide names and examples. She criticized Secretary of State Rex Tillerson for shutting out the press corps, she cited Trump’s “just not factually correct” wiretapping tweet and the dishonesty of his aides and press secretary in trying to justify it and she questioned whether Trump knew enough of the facts when he declared that Bill O’Reilly should not have settled the five harassment claims against him.

Yet Faulkner came up with no examples to defend Trump’s behavior.

Watters complained, “She just had Susan Rice on her show and asked zero fireball questions. That was a patty-cake interview. Come on.” This, from the guy who did softball interviews with Trump.

The discussion concluded with a nasty rant from McCain.

MCCAIN: The great liberation for me of President Trump’s election and win, on a personal level, is seeing how anxious and how much it has made media elites dance.

A lot of the people I have hated for years and years and years, known to be hacks, was on the campaign trail front and center with these people. I know what they’re like when the cameras are off and they're drinking at a bar off the record. 99.9% are Democrats I’m telling you.

She’s [Andrea Mitchell] one of the ones I dislike the most so it makes me happy she’s uncomfortable and miserable. Payback's a you know what.

When Fox doesn’t like the message, it attacks the messenger.

Watch the sleight of hand below, from the April 11, 2017 Outnumbered.

Karen Weber commented 2017-04-19 16:00:11 -0400 · Flag
She will never be a real journalist like Andrea Mitchell. McCain can let jealousy and bitterness serve her well at FOX; they seem to thrive on hating people. I feel sorry for Meghan.

But we should remember that this happened, and thankfully, this behavior has been preserved. So any time that Meghan McCain speaks at a “Family Values” event or at a church event or at anything where she will attempt to tout her decency, this clip should be presented to her and to her audience. Until she apologizes in public for this behavior, she will not have any moral grounds on which to say anything.

Hey, Meg — it makes me happy that Andrea Mitchell (or anyone else) never had to be “uncomfortable and miserable” covering your daddy in the White House . . .

Anita Hall commented 2017-04-19 05:51:04 -0400 · Flag
Can’t help but wonder how these folks are so eager to jump on the band wagon to trash a well known & respected journalist when they don’t even know what the definition of journalism is! Maybe their “No Spin” guy can explain it to them while he’s on his permanent vacation.

John McKee commented 2017-04-19 01:39:43 -0400 · Flag
These people are so jealous of anyone that can make it in the real, tough, competitive world outside the RWNJ bubble. They pretend like crazy that they’re grown-ups, valued for their insights and considered opinions, but they’re not even in the same industry as the Maddows, the Fahrenholds, the Rathers and the Eichenwalds.

Fox’s lot are nothing more than hosiery models/propagandists whose opinions on everything are provided for them when they walk in the door.

Joseph West commented 2017-04-19 01:31:21 -0400 · Flag
Given all the special treatment the FoxNoise folks give Chump, I’m guessing the FoxNoise make-up personnel have to give a lot of attention to the hosts’ faces to cover up all the brown on their noses.