McConnell Admits, ‘I Clearly Made A Mistake’ Accusing Obama Of Not Leaving Trump A Pandemic Playbook 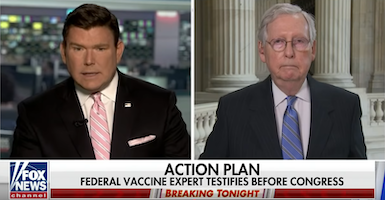 Yesterday, Sen. Mitch McConnell ate his words on Fox News after he bogusly told Lara Trump that the Obama administration never left the pandemic playbook that was ignored by the Trump administration. The question is why on Fox?

First, the falsehood, as CNN explains:

"They claim pandemics only happen once every hundred years but what if that's no longer true? We want to be early, ready for the next one, because clearly the Obama administration did not leave to this administration any kind of game plan for something like this," McConnell said.

It was the opposite of right.

CNN cites a March 25, 2020 article in Politico whose title and subtitle say it all: “Trump team failed to follow NSC’s pandemic playbook: The 69-page document, finished in 2016, provided a step by step list of priorities – which were then ignored by the administration.”

BAIER:  Dr. Bright is up testifying in the House today saying that the administration was woefully prepared, says it’s still not prepared.

VIDEO: Dr. Ken Bright   Those plans have been in place and it's disappointing they were not pulled out in January of this year, followed. They were not put on the table with a strong leader, indicating. These are our plans. Everyone fall in line with this plan.

BAIER:  You said that the previous administration didn’t leave a plan. They pushed back against that.

MCCONNELL:  Yeah, I was wrong. They did leave behind a plan, so I clearly made a mistake in that regard. As to whether or not the plan was followed, and who’s the critic, and all the rest, I don’t have any observation about that, because I don’t know enough about the details of that, Bret, to comment on it in any detail.

Fox News hosts don’t casually confront Republican officials on their lies and probably never out of journalistic principles, even if they have some. That's especially true in an interview with a powerful Republican such as the Senate Majority Leader and especially when doing so makes Trump look bad.

The question is whether McConnell’s camp somehow signaled to Baier in advance he wanted to address that point – and then distance himself from Trump - or whether Baier wanted to highlight the Trump administration’s failures, or both. Baier sometimes distances himself from Trump and sometimes plays the toady, so it’s hard to know which hat he was wearing here. Also in the interview, McConnell acknowledges Republican control of the Senate, i.e. his leadership, is in jeopardy so it could be he was giving a green light to his caucus to break from Trump.

I report, you decide.

You can watch the full interview below, from the May 14, 2020 Special Report. The exchange in which McConnell admits his mistake begins at 5:58.

truman commented 2020-05-15 15:42:16 -0400 · Flag
Hybrid man-turtle Mitch can read the polls. He knows that If the GOPiggy Senate candidates (Collins, Gardner, Tillis, McSally) blindly follow the Orange Clown, they will go down to ignominious defeat. More importantly to Mitch, he will lose his cushy job as Senate Majority Leader.