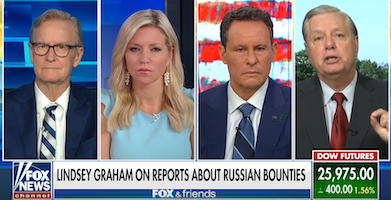 When the subject of Bountygate came up, cohost Brian Kilmeade did his part to suggest there’s nothing to see here. He said, “[Trump's lead briefer] Beth Sanner did not verbally brief the president on the threat of the Russians, the fact is proven correct, the Russians giving the Taliban money to kill Americans.” As if Trump can’t be expected to read his daily briefing. And as if prior ignorance excuses Trump from now demanding to get to the bottom of the matter. And as if the buck doesn’t stop with Trump regardless.

“Now [Rep.] Seth Moulton said from what he knows, the president committed treason. Where does Lindsey Graham stand?” Kilmeade “asked.” It was a not-so-thinly-veiled prompt for Graham to change the subject to attack Democrats and veer away from the very damning facts of the New York Times reporting on Russia's bounties.

Graham took the hint. “I don’t know if Congressman Moulton has been briefed,” Graham began, “but I would say I’m a fairly hawkish guy would you agree with that?”

“Russia’s been up to no good in a lot of different places, and I don’t have a whole lot of affection for Putin’s Russia, but I do understand the military,” Graham continued. “I think the system got it right. You had contradictory intelligence, we increased force protection just to be cautious, but I can’t imagine briefing the president of the United States about this allegation given the nature of the intelligence.”

Graham seemed much more interested in the thoroughly-debunked Benghazi “scandal” and demonizing Democrats than in what Trump is doing to protect troops in Afghanistan now that there’s no doubt he knows about the bounties.

GRAHAM: Now where were all these Democrats when Benghazi was on fire, when they were calling for help from the consulate? The president of the United States, Obama, was briefed and went to bed and never called anybody for a day and a half while our people were being slaughtered in Benghazi. Where’s the outrage then? The intelligence here in my view does not justify a nation-state conflict with Russia.

Never mind that Trump suggested he believes Russia over U.S. intelligence on the matter. The only suspicions from this gang of lickspittles was about Democrats and The Times.

“You know, you don’t tell the president of the United States everything you would tell a second lieutenant,” Graham insisted, as if Russian bounties on U.S. troops were a minor detail.

But Doocy agreed. “Right, exactly,” he said. Doocy continued, “It shouldn’t surprise anybody that it’s a big story in the New York Times. I mean that’s what they do. They come up with these big stories to make Donald Trump look bad.”

“And it’s all BS," Graham kowtowed. "He wasn’t briefed and there was no consensus." What Graham said is probably the real BS. But even if true, it’s a lame excuse at best. It’s Trump’s job to be up on and evaluate all the intelligence.

“The point is,” Graham added, “When it comes to American personnel in harm’s way, this president has an unwavering desire and commitment to protect our troops on the ground.”

You can watch the Trump cheering squad below, from the July 2, 2020 Fox & Friends.

Bemused commented 2020-07-03 04:21:10 -0400 · Flag
Four Americans died at Benghazi and the evidence points squarely at that having been an unforeseeable incident since nobody actually seems to have known that the Americans had decided to overnight in that outpost. Benghazi is over 8 hours away from the USA and over 60 minutes from the nearest American base at Sigonella in Sicily. The outpost had been overwhelmed within 30 minutes, too late for any rescue operation.

Confront that with the current crisis: Covid-19 has killed over 150,000 Americans within the USA (not thousands of miles away) and it is pretty likely that the death toll may rise to a million or more if the WH continues to propose wishful thinking instead of mobilising Americans for effective actions like physical distancing, wearing a mask and staying away from crowds. I would add that we should carefully avoid inviting any individuals usually referred to as “the life of the party” to dinner.