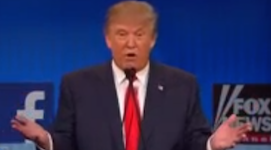 There were two especially bad moments for Trump. The first one was right at the beginning. The first debate question, from Bret Baier, was, "Is there anyone on stage, and can I see hands, who is unwilling tonight to pledge your support to the eventual nominee of the Republican party and pledge to not run an independent campaign against that person?"

Trump was the only one to raise his hand.

Baier started lecturing, "To be clear, you're standing on a Republican primary debate stage, the place where the RNC will give the nominee the nod and that experts say an independent run would almost certainly hand the race over to Democrats and likely another Clinton. You can't say tonight that you can make that pledge?"

No, he could not. However, he did quip that he would make that pledge if he's the nominee.

Not long afterward, there was this exchange between Trump and moderator Megyn Kelly:

KELLY: Mr. Trump, one of the things people love about you is you speak your mind and you don't use a politician's filter. However, that is not without its downsides and in particular, when it comes to women. You've called women you don't like, "fat pigs, dogs, slobs and disgusting animals."

KELLY: No, it wasn't. ...For the record, it was well beyond Rosie O'Donnell. Your Twitter account has several disparaging comments about women's looks. You once told a contestant on Celebrity Apprentice it would be a pretty picture to see her on her knees. Does that sound to you like the temperament of a man we should elect as president and how will you answer the charge from Hillary Clinton, who is likely to be the Democratic nominee, that you are part of the war on women?

TRUMP: I think the big problem this country has is being politically correct.

He got lots of cheers for that. But he got booed at the end of his next comment:

TRUMP (continuing): ...I don't frankly have time for total political correctness and to be honest with you, this country doesn't have time either. This country is in big trouble. We don't win any more, we lose to China, we lose to Mexico... we lose to everybody. And, frankly, what I say - and oftentimes it's fun, it's kidding, we have a good time. What I say is what I say. And honestly, Megyn, if you don't like it, I'm sorry. I've been very nice to you, although I could probably maybe not be, based on the way you have treated me. But I wouldn't do that.

Watch what happened below, via Raw Story and Think Progress.

UPDATE: OK, mea culpa, I was wrong about these moments dooming Trump. But I still think they were significant. For one thing, the exchange between Trump and Megyn Kelly is the famous one that set off the Fox News/Trump feud that has continued on and off ever since. Perhaps more importantly, they show that it was not just Megyn Kelly going after Trump during that first debate.

Lakeview Greg, Jane S, Scooter and Eyes on Fox (I think I got everybody) could be right that this debate has no negative effect on Trump. We’ll see who wins the bragging rights. :)

And really, nothing Trump did or said last night is going to have any impact on his approval and his poll numbers. My guess is they’ll go up slightly. Trump is right, he is who he is, and the people who support him know who he is and they like it. He’s got a ceiling somewhere, my guess would be well shy of 50 percent, but I don’t think he’s reached it yet.

Some of the Foxies are upset that he gave Megyn back as good as he got from her, but they’ll get over it. He’s still the a huge ratings-getter— until he starts to lose support in the polls, at which point Fox will drop him like a hot potato for whoever seems to be gaining serious momentum.

Soooooo, republicans need enemies. They create enemies and then use them to get out of tough jams.

TRUMP: most republicans hate Rosi O’Donnell, so calling her a fat pig isn’t such a bad thing.

Hey republican party — you turned the political process into a reality show, now your top barker is taking you to task.

You built it, baby!

scooter commented 2015-08-07 15:45:14 -0400 · Flag
All of this was merely theater in the FOX greed for ratings, and in that respect FOX won hands down. They know that the more controversial the spew from Trumps mouth, the more people will tune in. That’s all they care about. Those “tough questions” from Megyn the Media Whore? Just more window dressing in their efforts to pull in viewers.

FOX cares about nothing except profit. The conservative rubes they pander to are a means to an end, nothing more.

Lakeview Greg commented 2015-08-07 13:25:56 -0400 · Flag
I don’t think Trumpie ever had the Presidency to begin with, perhaps the GOP nomination at most. Didn’t watch it, but from reading and watching a few clips this seemed to be more about the hosts than the candidates. If you hated Trump before, you will now. If you love him, you do now.

On the big plus side, there seems to be a bit of a flapdoodle at FNC over the broadcast.

Eyes On Fox commented 2015-08-07 10:53:02 -0400 · Flag
@truman. I’m in total agreement with you on Jeb! and Scott Walker. The guys closest to Trump in the polls didn’t flub last night but failed to stand out, particularly Jeb! who is about as exciting as cold dishwater.

The guy who bombed was Rand Paul and he knew it sweating profusely about 2/3s in. He got his head handed back to him by Trump and Christie trying to interrupt for attention like a two year old.

Former Fox News star Huckabee, imho, was favored by the moderators and gifted him with the best softball of the night: Can you really shrink big government? So Mike was in full demagogue mode preaching to the choir most the night. I guess that’s why I’m as unimpressed as the Foxies are impressed.

Fox News post debate spin loved Ben Carson but were his vague generalities any better than Trump’s which they bashed hard?

I can’t 😞 take another 10 candidate sideshow!

His cat fight with Blackroots Barbie is just that. It’s not a fight with all women as Barbie would like you to conclude.

I had almost forgotten how biased Frank Luntz’s phony focus groups are. Frank is as credible as one of those rigged Rasmussen polls.

Jeb “I’m not my stupid brother” Bush and Scottie “I love all things Kock” Walker turned in listless performances. They might slip a peg or two. Rubio and Cruz might rise a bit.

Now that Fux loves Carly Purina, who will they bump out of the Clown Circus of 10 for the next faux debate to make room for her? Rand Paul would be my guess.

I could be completely wrong but I scored Trump as pretty much doing what he needed to do to remain on top. Sure, he got the most boos from an Ohio Republican Party hand-picked audience up front because he’s the only one refusing to take the GOP loyalty oath clearly unbiased right-winger Bret Baier targeted and pounded him with. But that’s not a news flash and unless his supporters haven’t been paying attention couldn’t have missed. They’re the ‘angry white man’ crowd who are sick of the GOP not sounding more like race-baiter Rush Limbaugh.

I get why Ellen is emphasizing the women’s issue but he got a lot a laughs off the Rosie joke so you know where conservatives versus liberals stand on name-calling women. Heck, if they’re liberal women getting smeared Republicans will give The Donald a hug.

No, while I agree Megyn Kelly created Trump’s most awkward moment of the night it was the abortion component that led to near silence surrounding Trump’s response. Not being pro-life since he was zygote himself is a Republican disqualification.

Fox News will argue they asked everyone tough, targeted questions and there’s a lot of truth in that but I found it interesting Trump appeared to be targeted a bit more than the rest. Poor Chris Wallace got steamrolled at least twice by Trump trying to take him down. I bet Chris’ butt still hurts this morning. ;^)

Greasy Frank Luntz made my skin crawl last night – not an atypical response. Just as typical, his focus groups usually feel rigged and last night was one of the worst. Following the Trump take-down theme, he made the case that The Donald’s pre-debate supporters mostly deserted The Donald post-debate. Oddly, the reasons they shouted out like Donald being a buffoon or blowhard or inexperienced politician is the sort of stuff even the dumbest of the dumb head in the sand conservative (which is to say most Republicans) couldn’t have missed. So I smell a rat and yet another rigged Luntz focus group.

Even Fox And Friends, usually Trump’s strongest supporters, look unusually subdued softballing The Donald this morning. Hasselbeck’s diapers are starting to smell as she vents the people’s choice will be a Republican so how dare Trump apparently undermine democracy by helping Hillary win?

Am I the only one who thinks Roger Ailes and his conservative Fox News sycophants want to torpedo The Donald? Probably.

Watching the Fox And Friends post-debate Republican love-a-thon it’s clear this liberal didn’t get last night. Huckabee and Cruz are being hailed as heroes and I didn’t really see that. I thought Christie built the most convincing case lying about his record of all of them to raise his profile yet the cons seem to prefer Rubio. So there you have it.

Hulk commented 2015-08-07 02:54:37 -0400 · Flag
Way to pull his pants up over his head. kelly is such a low gutter rat, I’m not surprised she pulled out this little piece of tabloid to take air out of his tires.
Needless to say, trump is a dolt; but this is pretty clear evidence that fox wants to eliminate him from their stew of clown soup; and the sooner the better.

Antoinette commented 2015-08-07 01:51:51 -0400 · Flag
The biggest losers were the Foxies and Barbie Megyn. The Trumpster’s supporters took to Facebook and Twitter to trash the Barbie and Fox “News.”

Their #1 ratings will take a hit.

Who are you going to defend? Kelly or Trumpster?