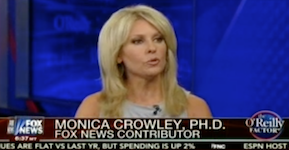 After CNN revealed more than 50 examples of plagiarism in the book by former Fox News contributor turned Donald Trump adviser, Monica Crowley, publisher HarperCollins has stopped selling it, albeit grudgingly.

You may recall that a few days ago, CNN's Andrew Kaczynski found the plagiarism in Crowley's 2012 book. There were so many instances (more than 50) from so many sources, that there was no way it could have been accidental. Furthermore, as we noted, Crowley had been caught plagiarizing in the Wall Street Journal, in 1999.

But wait, there's even more. Yesterday, Politico found more than a dozen examples of plagiarism in Crowley's 2000 Ph.D. dissertation.

"The book, which has reached the end of its natural sales cycle, will no longer be offered for purchase until such time as the author has the opportunity to source and revise the material," HarperCollins said in a statement to CNN's KFile.

In other words, HarperCollins, a sister company to Fox News, refuses to admit any wrongdoing by Crowley.