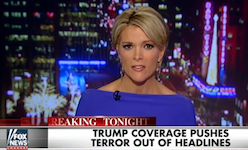 Megyn Kelly’s seemingly independent rant about over-coverage of Donald Trump's plan to ban Muslims from entering the country just happened to have a very pro-Republican benefit.

I’ve written before about how Kelly cleverly creates some YouTube moments that make her look like she’s not a Fox News/GOP mouthpiece while a closer look dispels the illusion. Last night was another example.

On the face of it, Kelly was knocking Donald Trump’s shocking platform of banning Muslims from entering the U.S. as well as the media for taking him too seriously. But the criticism conveniently helped push a Republican-friendly message while ignoring the darker places of the GOP Trump has thrown a spotlight on.

KELLY: President Barack Obama spoke Sunday night, to quote, reassure us. What we received was a statement that his strategy will not change, that some visa programs will be reviewed, gun laws that wouldn’t have prevented this attack nevertheless need to be tightened and reminding us to reject any instinct to treat Muslims differently or to fear monger about Islam. In response to which, most Republicans replied no one’s doing that, Mr. President.

…Now, less than a week after the worst terror attack since 9/11, we are in a full-blown media circus – not about these two killers and their terror ties – but about something a man who is not the president said he would do if by chance his party nominates him to be president and then the same general electorate that elected Barack Obama twice happens to choose him, Donald Trump, as their president.

Kelly went on to note that Trump’s remarks have been condemned by Republicans, Democrats, the Pentagon, the prime ministers of France and Great Britain and even Dick Cheney.

Therefore, she seemed to think, we should all just stop thinking about how the Republican front-runner is spouting frightening rhetoric reminiscent of Hitler’s Germany.

In fact, Kelly began suggesting that only a liberal media looking for ways to take the spotlight off President Obama would be so interested in Trump’s rhetoric. First, she complained about excessive coverage on other networks – while conveniently overlooking how much coverage her own Fox News has given Trump.

KELLY: Reaction from our leaders and elected officials was nothing compared to the non-stop, incessant drumbeat of media outlets that first booked Donald Trump to appear on their shows, then played those interviews ad nauseam all day long. CNN and MSNBC gave Trump half hour interviews by phone on their morning shows and then reran the exchanges in their entirety later in the day. It was all Trump, all the time, cross almost all the media. We are talking 18+ hours of coverage devoted to him in the past 24 hours. And the crowning moment? When ABC News went to no less than Barbara Walters to interview Trump for this evening’s world news tonight broadcast, yes Peter Jennings’ old post, which featured roughly 10 minutes of Trump coverage before they even got to the issue of terror. You remember terror?

Then she all but jabbed her Republican guest, Marc Thiessen, with an elbow to hint that covering Trump was a deliberate gift to Democrats. And, surprise! Thiessen took the hint.

KELLY: You tell me whether that is accidental, whether there is some reason they would prefer to be talking about what Donald Trump has said and whether he represents Republicans versus the terror attack that the president has basically said he’s gonna do nothing about to change our strategy in fighting this group, ISIS.

THIESSEN: Oh, no, absolutely. Look, at the White House, they’re saying, “Thank God for Donald Trump.” I mean, here we have the worst terrorist attack on our soil since 9/11. We found a terrorist bomb-making factory in a suburban neighborhood. President Obama was once again caught having underestimated the threat, telling us a day before the attacks that we didn’t have to worry about a Paris-style attack here and being proven wrong and 68% of the American people, according to a recent poll this week, say that he’s not doing enough on the ground, militarily, to defeat ISIS. This is the most important story, this is our national security in the balance and we’re talking about Donald Trump and something that’s never going to happen, banning all Muslims from entering this country.

…And also to the extent that there’s a liberal bias in the media, it’s good for them to move off of this story. Donald Trump clearly benefits but who else benefits from this? Barack Obama because we’re not talking about his failed strategy on ISIS. Hillary Clinton benefits…

Kelly interrupted to say, “There’s more to it.” She added that many Republicans and Democrats think that if Trump gets the Republican nomination, for president, that would mean “a potentially generational, catastrophic event for the Republican party.”

And that, ladies and gentlemen, I submit, is the real reason why Kelly suddenly cares about too much Trump coverage.

Watch it below, from the December 8 The Kelly File, and let me know what you think.

Kyle Dorfdorfendorf commented 2015-12-10 20:58:06 -0500 · Flag
Good thing we have Megyn devoting her whole show to complaining about all the other news outlets devoting their whole shows to Donald Trump.

Gosh. Megyn is so noble.

Fox News: Comedy that writes itself!

David Lindsay commented 2015-12-09 22:16:49 -0500 · Flag
So the orange haired blowhard sneezed into the republican party’s punch bowl and good hostess Megyn Kelly is at the ready with the punch ladle.

I guess Jeb Bush, Paul Ryan and Mitch McConnell haven’t had their flu shots yet.

NewsHounds posted about Fox Suggests That Attention To Donald Trump’s Muslim-Ban Comments Is A Liberal Media Plot To Help Obama And Hillary Clinton on NewsHounds' Facebook page 2015-12-09 21:03:57 -0500
Kelly wants us to think there's nothing to see here in Trump's shocking, Nazi-like rhetoric, and that we should all get back to knocking President Obama.