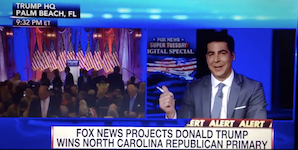 During FoxNews.com’s coverage of Tuesday night’s primary, Jesse Watters smirked as he said about Donald Trump, “Next time he should probably punch the protester in the face. His numbers will go way up.” Watters was joking, but still...

Cohost Melissa Francis objected. But a woman could be heard giggling offscreen.

Joking or not, there’s no excuse for a news host to be suggesting a candidate - or anyone - punch anybody else. We can just imagine how Fox would be shrieking if an MSNBC host urged Hillary Clinton to punch someone.

But Watters is not the only Fox News host looking for someone to get punched in the face. In 2013, Andrea Tantaros asked her radio show listeners to “do me a favor” and punch an Obama supporter “in the face.”

She still has her Fox News host job, too.

Bemused commented 2016-03-16 09:22:46 -0400 · Flag
The whole idea of the Constitution and attendant documents was to make violence unnecessary. As anybody who’s had to deal with bullies and authoritarian people well knows, the violence always starts off as a “joke”, “just kidding”, etc. By the time many (most?) people stop laughing, it may be too late to return to the mindset of responsible adults.