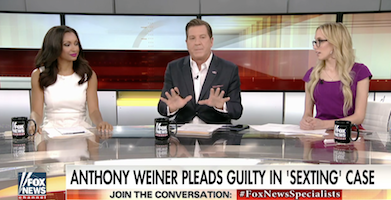 Fox host Eric Bolling has texted a dick pic to at least three female colleagues, according to multiple sources, HuffPost has reported.

HuffPost has kept the identifies of the women private but the publication says it spoke to 14 sources for its report. HuffPost also writes:

Reached Friday by HuffPost about the accusations against Bolling, a Fox spokesperson said, “We were just informed of this and plan to investigate the matter.”

When asked whether Bolling at any point had sent unsolicited lewd or inappropriate text messages or emails (including an image of a man’s genitalia) to Fox News or Fox Business colleagues, his attorney Michael J. Bowe responded, “Mr. Bolling recalls no such inappropriate communications, does not believe he sent any such communications, and will vigorously pursue his legal remedies for any false and defamatory accusations that are made.”

Oh, and wouldn’t you just know that Bolling has been an outspoken critic of fellow dick-pic dick, Anthony Weiner? Just a few months ago, as HuffPost noted, Bolling told his Fox News Specialists cohosts that Mr. Weiner is “a sick human being” who seems “pathological.”

Presumably, neither of the two female Specialists’ cohosts had been recipients of a Bolling weiner.

Watch Bolling condemn Anthony Weiner below, from the May 19, 2017 The Fox News Specialists.

Between all the sexual harassment stories coming out of Fox and just as many fake news stories getting debunked, GOPTV™ is circling the drain.

Next up Tucker’s white supremacy dog whistle gets taken away?

Poor guy — he didn’t even get to go on vacation first, like BillO.

The Murdochs don’t deserve Sky and we encourage all the masses to write letters to British publications urging British regulators to cancel the Murdochs’ bid for Sky. They have lost total control of Fox “News” Channel.

We included a few lines to get you started:

Hannie Pie, who prides himself of going after other hosts, and calls those networks ‘fake news’, has a credibility problem. This aging, Long Island Lolita, refuses to call out his own network’s problems. Since he won’t do it, we will do it for him on Twitter. You can paste and copy.

“Hey, Hannity! You have no room to talk about other news networks, given your network’s multiple scandals.”

“Why are you afraid to send Tweets about your network’s multiple lawsuits and scandals?”

“If I were you I wouldn’t send anymore nasty Tweets to Morning Joe, given your network’s numerous scandals.”

“Hannity likes going after other networks, except for Fox News. He’s a hypocrite.”

“Hannity complains about CNN and MSNBC. He stays silent about Fox News scandals and lawsuits. Hypocrite.”

Get rid of the weak Fox “News” president and co-president. They are complete failures. There are other people you need to fire immediately, otherwise Sky is history. It’s your choice.

You’d think sending out a pic of your John Thomas to three different people you work with would be something you’d remember.

Unless, of course, your JT isn’t very memorable, anyway . . .