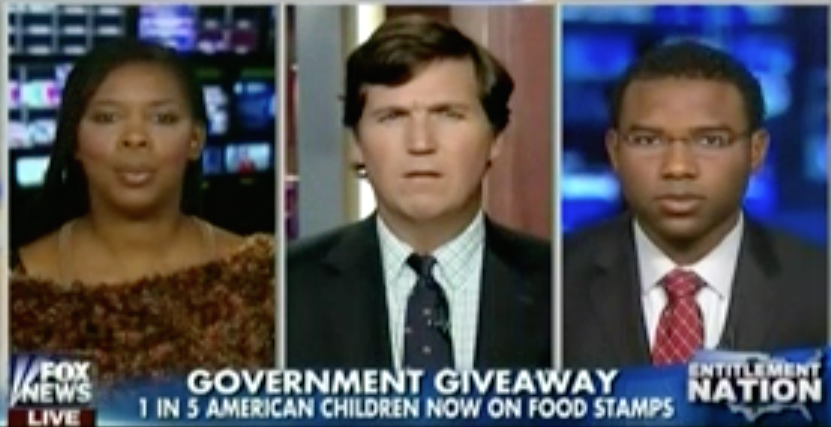 Fox’s Tucker Carlson is very concerned about the “skyrocketing” number of people on food stamps. Not out of any compassion but because it could be a sign that single mothers are gorging themselves at McDonalds instead of getting married.

Fortunate son Carlson called it “shocking” that nearly 46 and a half million Americans are now receiving food assistance. By way of introduction to a discussion, Carlson asked, “So what is causing these skyrocketing stats and what do they say about the future of this country?”

Instead of interviewing an expert or someone in a credible position to explain the situation, Carlson hosted a debate between “talk radio show host” Richard Fowler and “syndicated columnist” Star Parker. Predictably, the “debate” turned into a series of right-wing attacks on the poor from Parker – with assists from Carlson - and with Fowler mostly playing defense.

Fowler did make some excellent points, however. He said food insecurity is not a partisan issue but an “American problem” and a “really, really, really big deal.”

But, of course, the only big deals Fox cares about are ones they can exploit for political purposes. In this case, it was by demonizing the poor and President Obama. It’s hard to know which Fox hates more.

First, Carlson suggested the poor don’t really need food stamps but are literally getting fat on “takers’” handouts. He asked, “Star, how can you have a country in which hunger and obesity are both big problems in the same community?” As if Carlson didn’t have a clue that obesity is often linked to poverty and not because the poor are eating too well.

Parker apparently had no idea or if she did, she was too interested in promoting her anti-poor talking points to bother. She quickly launched into a right-wing diatribe suggesting that mothers wouldn’t need food stamps if they would just get married and stop going to McDonalds.

PARKER: Well, one problem with the food stamp program is that it’s no longer a stamp. It is a SNAP benefit on an EBT card. So what has seeped into our society and to our American psyche is one person – a single mom, for instance, will say I’ll buy my kid their McDonalds, you buy my kid their veggies. This mentality has seeped into our society because traditional family life has collapsed.

Carlson praised her for having raised “such a smart point.” Then he pivoted to blame President Obama by “asking” Fowler why the president hasn’t “a single time encouraged people to get married when they have kids.”

Fowler tried to argue that policies such as raising the minimum wage are needed to allow people to have good-paying jobs that “make ends meet.”

But, predictably, he was attacked, two-on-one, to make hunger about unwed mothers – and President Obama’s supposed poverty fail because he hasn’t “solved it” by cutting off food assistance and telling people to get married instead.

The discussion quickly devolved into a shouting match until Carlson interrupted to say, “We are out of time.”

Media Matters has a detailed deconstruction of the food stamp myths promoted in this segment.

Watch it below, from yesterday’s Fox & Friends, via Media Matters.

Anita Hall commented 2015-02-03 12:15:52 -0500 · Flag
Well ~ golly ~ gee whiz! What if any one of these “mothers” are raising a child from her being raped & how is she supposed to “get married” under those circumstances? But ~ let her starve & let the child starve ~ and somehow they’ll manage to blame the President for her rape! Can hardly wait for that “Great White Throne Judgment Day”! And to borrow from a southerner’s expression ~ “Bless their hearts”!

NewsHounds posted about Fox News War On The Poor: Let Them Eat Wedding Licenses Edition on NewsHounds' Facebook page 2015-02-02 19:53:37 -0500
According to Fox, women on food stamps are gorging themselves at McDonalds when they should be getting married instead.