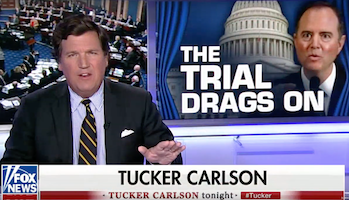 As Adam Schiff made such an impressive closing argument during Thursday's impeachment trial that even Republican senators reportedly paid attention, Fox News carried out its propaganda mission of making sure viewers missed it.

As NBC News reported, though it’s not clear Schiff changed any Republican votes, his emotional closing statement yesterday grabbed and held the attention of the otherwise restless Republican senators.

A packed and attentive Senate floor for Schiff’s closing. From my position in the press gallery, it appears every senator is at his or her desk or standing in the back.

Donald Trump must be convicted and removed from office.

If not, no Constitution can protect us.

If not, we are lost. pic.twitter.com/USfx6v9KsT

Fox News viewers probably never saw it. As I have been reporting, Fox is doing its best to sabotage the impeachment trial, complaining that it's "boring" and urging viewers to watch its spin of the proceedings instead. Last night, the network took that effort to new lows.

Media Matters crunched the numbers and found that Fox aired a mere 22 seconds of live coverage Thursday night during the hours of 7-11 PM ET. “To the extent Fox News viewers saw any of the impassioned closing of Rep. Adam Schiff (D-CA), it was filtered through what Fox hosts said about it,” Media Matters’ John Whitehouse noted.

You can check out the Fox News impeachment trial sabotage below, via Media Matters: