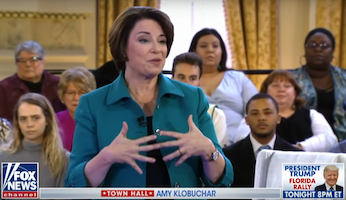 During its town hall with Democratic presidential candidate Sen. Amy Klobuchar, Fox News found ways to let viewers know it was still Trump TV both by interrupting the town hall to play a Trump-friendly video and by repeatedly promoting a prime time Trump rally later that evening.

I really have to wonder whether the Trump rally was deliberately scheduled in TV prime time just half an hour following Klobuchar’s town hall which ended shortly before prime time. In any event, it was a convenient way for Fox to demonstrate its loyalty to Dear Leader and his followers after the pique over Bernie Sanders’ town hall.

My DVR did not record the town hall (I didn't realize I needed to reset it from recording the usual programming during that time period) so I don’t have time stamps. But you can see that Fox started promoting Trump’s rally during the first video of the hour-long town hall. That event ran from 6:30-7:30 whereas the Trump rally began at 8. So Fox loyalists were able to quickly cleanse their minds of expanded health insurance, as Klobuchar proposed, so they could listen to jokes about shooting immigrants and chanting "lock her up" about Hillary Clinton! 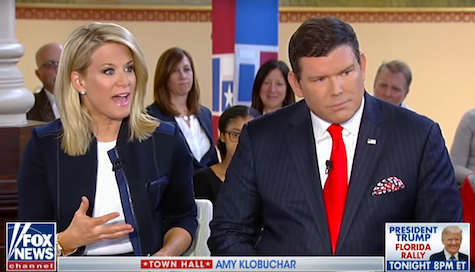 But that wasn't enough Trump for Trump TV.

A little past the 16 minute mark of Part 1 of her town hall, after Klobuchar had been discussing health care, protecting and building upon Obamacare and promising to take on the pharmaceutical industry, cohost Martha MacCallum interrupted the event to play a completely unrelated video mostly dedicated to promoting Donald Trump’s success in Wisconsin. The town hall took place in Milwaukee.

“We are going to move forward here and take a look at a piece that is about the Wisconsin economy, the impact of the economy on the last election and the fact that the Badger state … is going to be very central to 2020 as well,” MacCallum said. But the real message of the video was how Trump had outsmarted Hillary Clinton and now the state is mostly doing great thanks to him.

The video began with reporter Kristin Fisher saying, “It’s the state Hillary Clinton forgot in 2016 … and President Trump’s been reminding her of that mistake ever since.” After a clip of Trump thanking Clinton for not visiting Wisconsin, Fisher continued, “Clinton did not make a single stop in Wisconsin during the 2016 race, partly because the last time the state went for a Republican was in 1984.” We also saw a clip of Fox’s Trace Gallagher calling the “all important” state for Trump on Election Night 2016.

After reporting that Trump’s victory was thanks to “working-class swing voters, many of whom had supported former President Barack Obama,” Fisher showed clips of some of those happy voters. “The swing voters we talked to say they like the economy under President Trump,” she chirped. One voter said, “The economy here is booming. We have more jobs than workers.” Another voter: “My bank account has more money in it, I do pay less taxes.”

The graphic promoting Trump’s rally displayed throughout the report, including this one that looks as though it could have been staged by a Trump PR person: 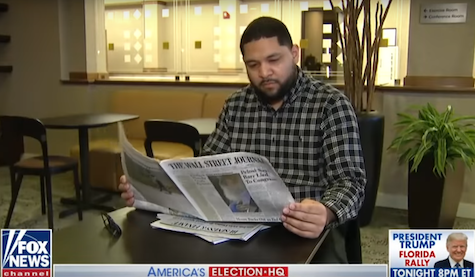 Fisher did note that Trump’s tariffs and trade wars “have taken a toll on the state’s dairy farmers and on companies reliant on steel and aluminum, like Wisconsin-based Harley Davidson.” She also said, “Democrats see an opening and are determined to not make the same mistakes.” But in a supposedly objective look at a battleground state, Fisher failed to report how unpopular Trump really is in Wisconsin. A Marquette University Law School poll last month found that only 28% say they will definitely vote to re-elect Trump next year, while 14% say they will probably vote for him. 8% say they will probably vote against the president and 46% say they will definitely vote against him. An April Morning Consult poll found Trump’s net approval in Wisconsin has decreased 19 points since taking office. But hey, why spoil the mood for the upcoming rally?

Klobuchar provided only the mildest of pushback, saying that she campaigns everywhere, not just where it’s comfortable, and that Hillary Clinton would have been a great president.

The promotions for the Trump rallies continued. 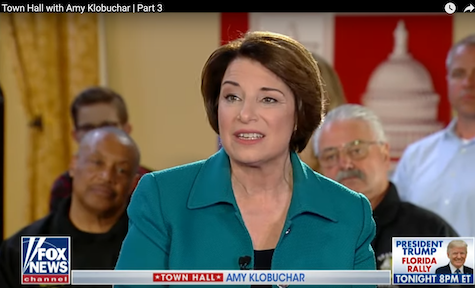 scooter commented 2019-05-09 16:04:47 -0400 · Flag
As predicted FOX will not treat Dem candidates squarely or fairly. They are lies and propaganda. No Democrat should ever go on FOX for any reason at all. FOX needs to be destroyed utterly and giving them legitimacy and airtime is not the way to do it.