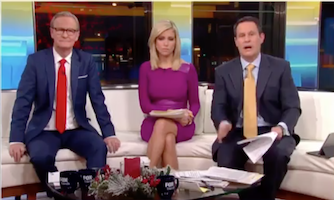 Fox & Friends cohost Brian Kilmeade had a very pointed message for Donald Trump, via Sarah Huckabee Sanders, on his decision to withdraw all troops from Syria: You just “refounded ISIS” and you’re “doing exactly” what you criticized President Obama for doing. Oh, ouchie!

Kilmeade’s blistering comments have the mark of a very senior Fox News executive, almost certainly a Murdoch, all over them. As I’ve previously said, no Fox News host who values his job would take it upon himself to lash out at a high-level Trump administration official like White House Press Secretary Sanders. And it’s unlikely anybody other than a very top exec would instruct Kilmeade to do so, either.

That's not to say that Kilmeade didn't mean every word, just that he would never spout off like this merely because he felt the need to get it off his chest.

Also, Kilmeade didn’t just disagree with Trump’s decision, he blamed Trump for a resurgence of ISIS and likened him to President Obama at the same time. It’s hard to know which Trump might think worse.

It seems that Kilmeade is the go-to guy for delivering these kinds of messages. He took the lead in offense against Secretary of State Mike Pompeo over the Saudi murder of Washington Post columnist Jamal Khashoggi a few weeks ago, too.

Whether this will make a difference in Fox’s overall coverage and framing of the Syria troop withdrawal or whether Fox will keep up the pressure on Trump remains to be seen. I haven’t seen anything about Khashoggi on the network lately. That suggests that Fox planned those comments to be a one-time message, not any real focus of coverage. On the other hand, a precipitous withdrawal of troops from Syria, coupled with the resignation of Defense Secretary Jim Mattis over the issue, is a whole 'nother level of significant.

Watch Kilmeade lambaste the Syria troop withdrawal below, from the December 21, 2018 Fox & Friends via Media Matters.

Bemused commented 2018-12-24 10:43:20 -0500 · Flag
Naaaah, Willy2. Trump is hoping that something, anything, whatever, however, will draw people’s attention away from the accelerating disaster that is his administration.

Seems the acting secretary for defense will be a guy who’s never done a day of military service. Whatever happened to Candidate Trump’s promise that he would hire the best of the best? Oh wait. The only promise he intends to keep would be the border wall, unaware or totally unable to understand that it would have to be high enough to block access by airplane (the mode of travel of over half the migrants he wants to block).

Want the truth? I’m terrified that this raging ignorant fool will actually be tempted to start a war.

- There must – IMO – someone who has suggested all this to Trump.
– And “Corporate Washington DC” is going to be “mad as hell”. To be continued …………