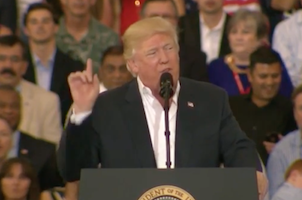 First, presidential advisor Kellyanne Conway brought us the fake “Bowling Green Massacre” when she tried to justify her boss’ Muslim ban. Now, the boss himself has come up with some kind of refugee/terror attack in Sweden that didn’t happen. And Trump handled it with just the kind of presidential leadership you’d expect: He blamed someone else - in this case, Fox News.

During his campaign rally yesterday, Trump pointed to Sweden, which has taken in large numbers of refugees, as some kind of justification for his Muslim ban:

The only problem? Nobody knew what had happened the night before in Sweden, including the Swedes. The former prime minister asked on Twitter, “What has he been smoking?”

Sweden? Terror attack? What has he been smoking? Questions abound. https://t.co/XWgw8Fz7tj

As it turned out, Trump had no facts. Faced with this latest embarrassment, Trump came up with this BS excuse:

My statement as to what's happening in Sweden was in reference to a story that was broadcast on @FoxNews concerning immigrants & Sweden.

Trump was probably referring to something he saw on Tucker Carlson Friday night. It was a discussion about an alleged rise of crime in Sweden after taking in refugees. But as Mediaite noted, there was no incident mentioned in the segment and it had been recorded earlier in the week.

In other words, the guy who has been railing about “fake news” as the enemy of the “American People!” just dumped a load of fake news on those same people.

The FAKE NEWS media (failing @nytimes, @NBCNews, @ABC, @CBS, @CNN) is not my enemy, it is the enemy of the American People!

Yet Trump didn't even seem to be upset that he had just been the victim of this scourge.

So does that make Trump an “enemy of the American People!” now?

Watch Trump talk about “what’s happening last night in Sweden” below, from his February 18, 2017 campaign rally, via the Huffington Post. Below that is Trump’s likely “source,” from the February 17, 2017 Tucker Carlson Tonight.

President Donald Trump falsely suggested at a Florida rally Saturday that Sweden had suffered a terror attack the previous night. After announcing that the White House planned to renew its efforts to restrict immigration, Trump cited several European countries and cities that he said showed the dangers of admitting immigrants, particularly refugees.

Sweden: Um, there was a high profile hate crime, where a few white supremacists attacked a group of brown immigrants who got between them and one they were targeting… It’s high profile because of how open it is, but it wasn’t anything…

Trump: That’s not what I’m-

Sweden: Then what are you talking about?

Trump: I’m getting to that!

Sweden: No, you skip to that part now.

Sweden: Then why do you want us to bla-

Trump: See- This is that fake news I’ve been telling you about! These people-

My wording, but correct me where this is wrong.

Oh, that’s easy: he’ll just buy ISIS, then declare bankruptcy. Its worked well for him before.

lester goulart commented 2017-02-20 16:10:15 -0500 · Flag
At no point did the president say there had been a terror attack. He said the crime rate is up since the influx of the mid east people. I am no longer going to believe anything that comes from the media. You guys lie, and pile on with untruths. Donald Trump is doing everything he said he was going to during his campaign. God Bless him.

Of course, no mention of #SwedenAttack (maybe it came early on and I missed it). I did catch Chris Stirewalt make the point the world thinking Trump is crazy is a good thing. Seriously? So was the Trump administration botching the Muslim ban according to Stirewalt’s view inside the bubble.

Isn’t there supposed to be a liberal on the panel? Nothing but bobble heads I saw. They all were as giddy as children on Christmas morning discussing Trump.

Eyes On Fox commented 2017-02-20 11:24:45 -0500 · Flag
I watched about an hour of “Fox & Friends” this morning. They managed to squeeze in segments smearing liberals on immigration without a single faux liberal like Geraldo interfering with their propaganda. But no mention of #SwedenAttack.

So my question for Newshounds is has Fox News come up with a cover story for idiot 🍊🤡 yet?

truman commented 2017-02-20 09:21:44 -0500 · Flag
Our Mango Mussolini don’t need no stinking daily intelligence briefing to know what really is going on in the world. He just randomly watches fTucker, KKKlannity and the three moronic Fux Friends.

Zap Pow commented 2017-02-20 08:13:41 -0500 · Flag
Trumpistan has already decided that pretending Trump invented a terror atack in Sweden is just ill will, lie by the “fake news media” and the hard left, because Trump never said there was a terror attack ,he was speaking about the surge in criminality yadda yadda yadda.

And it must have been a surge (even if he talked about “something” in Sweden in the beginning of a list of terror attacks — without any relation with refugees, btw) since it happened the night before.

But, Trumpistan, what about the fact that there was no surge in criminality, associated with refugees or not, in Sweden ? Wouldn’t that be as fake news as a terror attack ?

john howard commented 2017-02-20 07:48:11 -0500 · Flag
AS I said before, Don the CON is going down in flame and he will be taken FAUX FAKE NEWS with him. KARMA!!! If he is willing to throw FAUX FAKE NEWS under bus, Then guess what? no one has his loyalty but Putin and Russia, wake up and smell the coffee, just saying!!

Eyes On Fox commented 2017-02-20 07:21:56 -0500 · Flag
Now, now gang. Trump is the smartest guy you’ve ever met. If you don’t believe me just ask him. He brags he went to Wharton for goodness sake. Just because Der Furor appears to be a complete dumbass at the moment, unable to comprehend a simple Tucker editorial rant, doesn’t change what an absolute genius the man is.

Any moment now Kellyanne Conway will clarify the brilliance of Trump’s Sweden lie. Well, heck, it’s not a lie. Read his heart of hearts like Kellyanne does. It’s all rainbows and unicorns sweet! You never met a man so honest. Just ask them.

But Kellyanne needs to hurry up because “Fox & Friends” doesn’t know how to spin this story. Fox News is completely silent on the Sweden story this morning.

Bemused commented 2017-02-20 06:35:10 -0500 · Flag
I’m with you David. The hypocrisy on display lately is what’s getting my goat the most. Although there’s no reasoning with a Trumpster, I’m ever hopeful that Trumplicans may start to feel uncomfortable. McCain and Graham, even Larry Sabato, are setting a positive example. Trumpsters and Trumplicans would have raked President Obama over the coals had he done anything even remotely similar. They repeatedly did so for far smaller, even totally imaginary things.

In a somewhat perverse way, I’m reassured by the way that the rest of the world is starting to laugh. I particularly liked the Swedish wag who tweeted about his son having dropped his hot dog into the campfire: “How could President Trump have known?” Delightful. Better to laugh than cry, as the saying goes.

It was in all the history books.