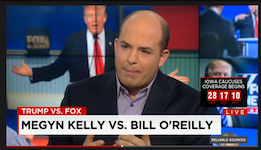 If you thought the drama was over at Fox News once the debate ended, think again. CNN Brian Stelter is now reporting that it’s an “open secret” that Bill O’Reilly and Megyn Kelly are feuding. UPDATED.

STELTER: Bob, there is some animosity between Bill O'Reilly and Megyn Kelly, right? I thought it was so unusual that O'Reilly didn't stand up for Megyn Kelly when he was interviewing Trump the other day.

BECKEL: Yes, I don't watch O'Reilly on a regular basis, so I didn't know that.

But, look, he came after me because I said that there was some tension between the two of them.

STELTER: Bob, it is a fact. Bill O'Reilly does have some animosity toward Megyn Kelly, because she is doing well in the ratings, but he is still number one.

Stelter later hinted that there’s more to the animosity than ratings.

STELTER: One of the subtexts of this story is that Megyn Kelly's contract is up next year. I think O'Reilly's might be up next year too. Fox wants to hold on to Megyn Kelly at all costs.

Trump's fight with Fox News has exposed another very personal feud — the one between Fox stars Bill O'Reilly and Megyn Kelly. The animosity between O'Reilly and Kelly is an open secret in the halls of Fox... That's the story I was working on tonight. Look for it in tomorrow's newsletter...

We’ll definitely be looking for it.

UPDATE: Stelter's follow-up report gives some more explanation about the nature of the acrimony:

From Kelly's perspective, she has been nothing but kind to O'Reilly, while she thinks he lets jealousy get the best of him.

From O'Reilly's perspective, he helped make Kelly a star but now she's too eager to outshine him -- touting her own ratings successes without respecting his contributions.

Likely due to the fact Megyn Kelly is the one FoxBlonde BillO hasn’t gotten to use his loofah/falafel on . . .

Eyes On Fox commented 2016-02-01 10:11:48 -0500 · Flag
Kelly may be the future at Fox News (as long as she keeps a talented plastic surgeon on retainer) because her show is Ailes’ desperate attempt to expand the network’s popularity outside of nursing homes. ’America’s daddy’, Bill, is reflective of Fox’s ancient demographic Roger hopes to diminish as the network’s core audience.

You can see a similar trend in the ascendancy of dried up but more youth oriented comic Greg Gutfeld. While I find his show to be unwatchable, even if it’s wildly popular with Fox News’ target right-wing audience, the larger problem is it’s political satire so Ailes can’t make it the cornerstone of his Republican propaganda factory like he can ‘serious journalist’ Megyn.

All that said, if Trump becomes president and remains popular with the GOP base (Fox’s fan base), it’ll spell trouble for Megyn and Ailes’ vision of the future. Unless Megyn can find a way to feed Trump’s monstrous ego.

Anne-claire Souza commented 2016-02-01 09:52:00 -0500 · Flag
This would be no surprise she is stealing quite a bit of his thunder. Also when he has her on his program you can feel the animosity between them with Kelly mostly having the upper hand . They are both yuuuuuuuge egos and it will be fun to watch these two posture for dominance.