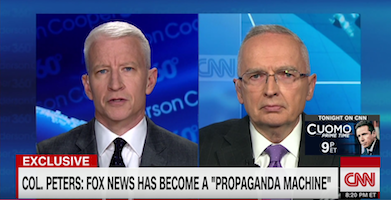 Retired Army Lt. Col. Ralph Peters was on CNN tonight and, just like his jaw-dropping written comments when he left Fox News, he did not hold back on the damage he thinks Fox is doing to this country nor his belief that Donald Trump is in the grip of Vladimir Putin.

You may recall that Peters went nuclear in March when he left Fox News after 10 years as a conservative analyst. Tonight, we can see that he is still seething:

PETERS: The assaults upon [Robert Mueller’s] character, upon his practices, upon his investigation betray our fundamental principles.

I think they’re doing a great deal of damage still. We won’t know how bad for years to come when we see the ultimate results.

Anderson, for years, I was glad to be associated with Fox. It was a legitimate conservative and libertarian outlet. And a necessary one. But with the rise of Donald Trump, Fox did become a destructive propaganda machine and I don’t do propaganda for anyone. [...]

I saw, in my view, Fox, particularly the prime-time hosts, attacking our constitutional order, the rule of law, the Justice Department, the FBI, Robert Mueller and oh, by the way, the intelligence agencies and they’re doing it for ratings and profit. And they’re doing it knowingly, in my view, doing a grave, grave disservice to our country.

I suspect Sean Hannity really believes it. The others are smarter. They know what they’re doing. It’s bewildering to me. I wanted to just cry out and say, “How can you do this? How can you lie to our country? How can you knowingly attack our Constitution?”

Peters also unloaded on Donald Trump with regard to Russia. Peters, as Cooper explained, is something of an expert on Russia.

PETERS: I am convinced that Vladimir Putin has a grip on President Trump. … The Steele dossier … just rang true to me because that’s how the Russians do things. And before he became a candidate or president, Donald Trump was the perfect target for Russian intelligence. Here’s someone who has no self-control, a sense of sexual entitlement and intermittent financial crises. I mean, that’s made to order for seduction by Russian intelligence. And look, I may be wrong. I hope I’m wrong … but the dossier rings true.

We had our differences with Peters in the past. What’s important is he has seen the light and will do what it takes to stop the Foxies and Trumpy’s crooked allies.

Peters won’t be the only person distancing himself from the Foxies. Others will follow to protect their reputations.

Watch for the BIG story coming very soon about Pie. That will be the day all of his friends and associates run away from this clown.