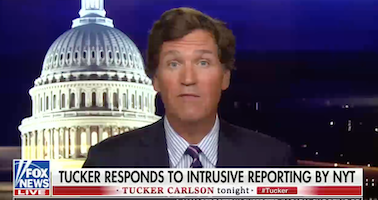 Last night, Tucker Carlson suggested his fans dox New York Times journalists with a dubious accusation that the paper had doxed him. Today, Carlson’s fans complied with his suggestion.

In the wake of the resignation of his head writer after he was outed as an overt racist, followed closely by a lawsuit alleging he sexually harassed a guest, then retaliated against her for declining his advances, Carlson proved he’s every bit as malicious as you would imagine a racist, sexual predator would be.

Just before closing his show last night, Carlson said this:

CARLSON: Well, all of a sudden, the media have ripped off the mask and they're supporting violence as a political tactic. They spent the last few months describing the riots as mostly peaceful. They've provided cover for rioting. They've watched conservative speakers shut down, their families harassed.

Whenever guys like Carlson accuse the media or Democrats or liberals of something, you can bet that that is an excuse for Carlson, et al., to do exactly what they are playing the victim about. Sure enough, after the break, and in the video below:

CARLSON: Last week, "The New York Times" began working on a story about where my family and I live. As a matter of journalism, there is no conceivable justification for a story like that. The paper is not alleging we've done anything wrong, and we haven't. We pay our taxes. We like our neighbors. We've never had a dispute with anyone.

So why is The New York Times doing a story on the location of my family's house? Well, you know why: To hurt us. To injure my wife and kids so that I will shut up and stop disagreeing with them. They believe in force. We've learned that.

Two years ago, a leftwing journalist publicized our home address in Washington. A group of screaming Antifa lunatics showed up while I was at work. They vandalized our home. They threatened my wife. She called 911 while hiding in a closet.

A few weeks later, they showed up again at our house. For the next year, they sent letters to our home threatening to kill us. We tried to ignore it, it felt cowardly to sell our home and leave. We raised our kids there in the neighborhood, and we loved it.

But in the end, that's what we did. We have four children. It just wasn't worth it.

But The New York Times followed us. The paper has assigned a political activist called Murray Carpenter to write a story about where we are now.

Their story about where we live is slated to run in the paper this week. Editors there know exactly what will happen to my family when it does run. I called them today and I told them, but they didn't care. They hate my politics. They want this show off the air.

If one of my children gets hurt because of a story they wrote, they won't consider it collateral damage. They know it's the whole point of the exercise, to inflict pain on our family, to terrorize us, to control what we say. That's the kind of people they are.

They'll deny this, of course. They'll claim it's just journalism, just the facts. Really? So how would Murray Carpenter and his photographer Tristan Spinski feel if we told you where they live? If we put pictures of their homes on the air?

What if we publicize the home address of every one of the soulless robot editors at The New York Times who assigned and managed this incitement to violence against my family?

What about the media editor Jim Windolf? We could do that. We know who they are. Would that qualify as journalism? We doubt they'd consider it journalism.

They’d call it criminal behavior if we did it. And that tells you everything.

Carlson couldn’t be bothered to provide any proof that the Times’ only reason for its story was to “terrorize” his family or to “control” what he says. But there is a good case to be made that the reason Carlson said what he did was to terrorize the Times out of writing about him.

Even worse, in his eagerness to endanger other people’s lives, Carlson seems to have lied. From Media Matters:

A spokesperson for the paper told The Washington Post: “While we do not confirm what may or may not publish in future editions, the Times has not and does not plan to expose any residence of Tucker Carlson’s, which Carlson was aware of before tonight’s broadcast.” [my emphases]

Here’s just one of the examples Media Matters provided:

Someone is posting about filling reporter @Murray_journo’s voice mail, getting “all his info” and having obtained a “hand drawn layout” of his home. pic.twitter.com/VuYr7uIKwp

By the way, the “Antifa” incident Carlson referred to appears to be at best an exaggeration.

We get why a guy like Tucker Carlson would do a thing like this. But what’s Fox News’ excuse for allowing it? There is none.

So, Tucker, do you think this proves to your wife or anyone else that you didn’t proposition a guest on your show while keeping her secured to her chair, as she has alleged in her lawsuit?

You can watch this obscenity below, from the July 20, 2020 Tucker Carlson Tonight, via Media Matters.

If you were really concerned about your family you shouldn’t be chasing other women who weren’t your wife. We feel sorry for your kids. You are an embarrassment to your daddy’s name and the rest of the Tucky family.