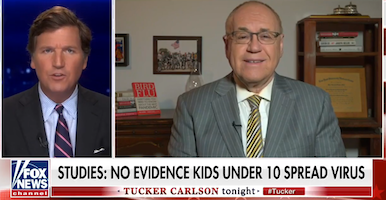 Carlson was presumably working on his latest pro-death fantasy, sending kids back to school in the middle of the coronavirus pandemic. If Carlson really cared about their lives, he would have done a better job making sure they’d really be safe, rather than sloppily promoting a false interpretation of data.

Carlson began the segment by announcing, “And now to the latest science, there’s new evidence that young children do not spread the coronavirus. Not what we thought.”

With that, he brought on Siegel. In the past, Siegel has been a willing promoter of Fox’s coronavirus propaganda. Perhaps because he’s been caught, in videos by both The Washington Post and The Daily Show, e.g., he seems to have developed at least a modicum of independent thought.

SIEGEL: Tucker, I want to cut through the news and get to the science of this, which is that 78 studies out of the United Kingdom show that children, especially under the age of 10, are not very likely to get Covid-19 or to spread it.

But one of the authors of that study says he’s being a little bit misinterpreted and the Centers for Disease Control (CDC) has said that one to two percent of the cases, looking at 150,000 cases, were children under the age of 18. The real truth here is, and a China study showed that 90 percent of children have asymptomatic cases, so Tucker, they appear to have a protein in the lungs that protects them from severe disease and almost all of the children who get this are either asymptomatic or have mild cases.

Carlson never apologized for pushing his false interpretation. He didn’t even acknowledge his error. Instead, Siegel moved on to efforts to “warp speed” a coronavirus vaccine. Then Carlson ended the very brief segment. John Amato, at Crooks and Liars (where I am a contributor), called it the shortest he’s ever seen with Siegel. He also noted that there are kids who have become very, very ill from COVID-19.

But Carlson is not just OK with more deaths from the coronavirus in the name of “opening up” the country, he's actively pushing for them – with Fox’s help. The network called its online video of this segment, “New studies suggest young children are less likely to get, spread coronavirus.”

You can watch Carlson caught in a lie the network helped to further below, from the April 30, 2020 Tucker Carlson Tonight.