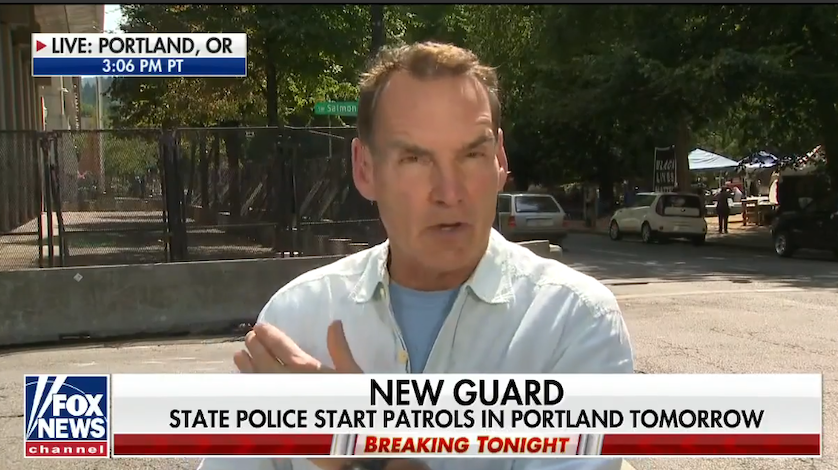 Crybaby Donald Trump accused Fox News of “possibly on purpose” misreporting a deal for federal agents to withdraw from Portland. But it would seem that what Trump really objected to is that Fox didn’t make him look enough like an authoritarian bully.

As predicted, despite complaining that Fox is “not even watchable” yesterday, Trump was still watching Fox News – and whining about it – hours later.

Later in the day, he accused the network of deliberately misreporting events in Portland, Oregon.

.@FoxNews reported incorrectly what the Federal Government is doing with respect to Portland. We are demanding that the Governor & Mayor do their job or we will do it for them. To complicated to discuss in a Tweet, but bad reporting by Fox (possibly on purpose!). @DHSgov

Judging from the tweet’s timestamp, Trump was apparently fuming over a report on Special Report. Although reporter William La Jeunesse did not say that the federal government was “demanding that the governor and mayor do their job or we will do it for them,” La Jeunesse made it pretty clear that the deal involved Oregon’s state police taking over from the feds, with the feds hanging around, with the threat of returning if it doesn’t work out:

LA JEUNESSE: Under the deal, Oregon State Police will help defend the [federal] courthouse, allowing some federal agents to withdraw.

LA JEUNESSE: Both sides have a chance to prove themselves. The feds are expected to remove this fence surrounding the courthouse and stop sending agents into the streets. State police will likely have to clear a nearby park where protesters and rioters have staged.

LA JEUNESSE: Secretary Wolf says agents will remain nearby in case they’re needed. Privately, the two sides made the deal. Publicly, they’re still on the attack. Name calling, finger-pointing and blaming each other.

You can watch the report Trump attacked below. It’s from the July 29, 2020 Special Report.

NOTE: I am blocked by Trump on Twitter. I stumbled on this tweet after regular reader Eric J. gave me a heads up about Trump's earlier tweeted complaint about Fox. I can only view Trump's tweets by using a browser where I remain logged out of Twitter, then scrolling through his prodigious feed.

scooter commented 2020-07-30 12:19:43 -0400 · Flag
Ellen, being blocked by Trump is a badge of honor. As for his outlandish statements – we all know he says stuff just to stir up controversy. I try to ignore him as much as possible. He represents the very worst of American society and I want no part of him in my life.