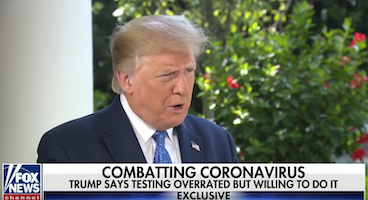 Dr. Marc Siegel, a Fox News contributor and professor of medicine at NYU Langone Health, displayed a shocking disregard for public health during the COVID-19 pandemic when he failed to challenge Trump's claim that testing is “overrated” and that he doesn’t “feel comfortable” wearing a mask most of the time.

Only on Fox News would a medical contributor allow Trump to lie about a life-and-death matter in the middle of a pandemic. But that’s exactly what Siegel did. He let go by Trump’s ridiculous claim that testing is a cause for the recent surge in coronavirus cases.

TRUMP: If, instead of 50, we did 25, we would have half the number of cases. So, I personally think it's overrated. But I am totally willing to keep doing it. You know, we have so many more tests than any other country, by far.

But think of it. If, instead of 50 million, we did 25 million, we have half the number of cases. The cases would be down. Here would be the normal headline. Not for me, it wouldn't be, but for anybody else, they'd say, cases cut in half, OK? But they wouldn't report it that way.

Siegel’s response? “As a father and a grandfather, what do you want to see happen with schools? What will you do?”

Later, Siegel made a point of gratuitously expressing admiration for Florida’s Governor Ron DeSantis, who has refused to mandate masks even as COVID-19 cases are soaring there, and Siegel allowed Trump to suggest that mask wearing should be a matter of personal preference. This, despite the fact that models show tens of thousands of lives could be saved by widespread mask wearing.

SIEGEL: Masks. There's a difference of opinion between two great governors. They both support you. Governor Abbott in Texas, universal mask policy. In Florida, Governor DeSantis, who I have a great deal of respect for, is not -- not putting in that mask policy. Certain counties have it. Is there a role you will play in talking to the governors about masks? …

TRUMP: Well, on the masks, my attitude is that, when I was at the hospital, I felt very comfortable wearing the mask. I was seeing young people that were hurt very badly in military situations. And I felt for them, not for me, I felt for them my wearing a mask was a good thing. I felt extremely comfortable. I don't feel comfortable in other settings.

But I believe that you should wear it, even if there's a one percent chance it helps.

Siegel has long placed Trumpism above medical science during the pandemic. You may recall that during the “it’s a hoax” phase of Fox’s coverage, Siegel said on Fox about the coronavirus, “at worst, worst case scenario it could be the flu” and agreed with host Pete Hegseth that the more you know about it, “the less there is to worry about.” Siegel also defended Trump’s supposed use of hydroxychloroquine for treating coronavirus and talked up his own father’s miraculous recovery from near-death after taking hydroxychloroquine – while leaving out the part as to whether or not his father actually had the coronavirus.

Still, you’d think Siegel could muster up at least some concern for public health at a time like this.

You can watch this disgrace to the medical profession below, from his July 22, 2020 Trump “interview.”

scooter commented 2020-07-23 17:11:41 -0400 · Flag
Like all interviews with Chump the questioner must be obsequious and fawning at all times, or you will not be permitted to speak with It again. So far only Chris Wallace seems to have gotten away with asking real questions, and those were couched in a very non-threatening and subservient manner.