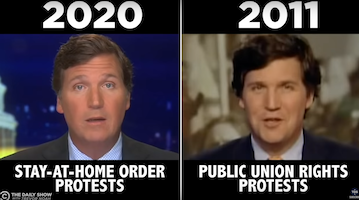 The Daily Show put together a video proving that a pro-union protest in 2011 Tucker Carlson called “contemptible” looked a lot like the reopen protest he slobbered over last month. Except the Michigan protests also endangered people with potential coronavirus exposure.

Carlson’s comments about the Michigan protest come from a segment I posted about last month. In it, Carlson all but swooned over the astroturf protest The Washington Post described as follows:

For miles, thousands of drivers clogged the streets to demand Michigan Gov. Gretchen Whitmer (D) ease restrictions and allow them to go back to work. They drowned downtown Lansing, Mich., in a cacophony of honking. They blared patriotic songs from car radios, waving all sorts of flags from the windows — President Trump flags, American flags and the occasional Confederate flag.

But in the massive demonstration against Whitmer’s stay-at-home executive order — which they have argued is excessive and beyond her authority — the pleas from organizers that protesters to stay in their vehicles went unheeded. Many got out of their cars and crashed the front lawn of the capitol building, with some chanting, “Lock her up!” and “We will not comply.”

As The Daily Show video shows, the unmasked, protesting mob also stormed the capitol, disregarded social distancing and got in the faces of security workers, thus potentially threatening the lives of everyone involved.

But Carlson found nothing not to love about that protest. The Daily Show video showed him saying, “This is America. We’re allowed to disagree with what our leaders do, however we like, and we’re allowed to express that disagreement in public. That’s our birthright.” He also thanked his guest, who was one of those protesters, for “exercising your constitutionally protected rights as an American. Bless you.”

But in 2011, when pro-union protesters stormed the Wisconsin capitol, not during a pandemic, Carlson was not so enamored of those constitutionally protected rights. The Daily Show caught him sneering, “Yes, that’s America. So, with the left holding the democratic process hostage, what is next for Wisconsin?” He complained that the pro-union protesters “scream like children” and that the left should “make its case, win the voters of Wisconsin to its side, rather than resorting to tactics that really are contemptible.”

Watch it below, via the May 5, 2020 The Daily Show, and have some laughs on Carlson.

Eyes On Fox commented 2020-05-07 16:56:32 -0400 · Flag
Good catch by “The Daily Show”. One wonders if people had the time and resources how many hours of similar hypocrisy one could dig out of the Faux News archives. Actually, the results would have to be measured in weeks, not hours!