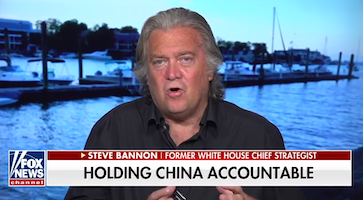 Steve Bannon urged Donald Trump, via Fox News, to ratchet up tensions with China as a way to win re-election. Because smack dab in the middle of a pandemic surge and an economic crisis, who doesn’t want to risk a war, too?

Bannon, the “former White House chief strategist” whose departure from the Trump administration brought cheers to the floor of the New York Stock Exchange and immediately lifted the stock market, visited the Trump-worshiping Watters World show Saturday night to blame the Chinese for the coronavirus pandemic and offer the Fan in Chief some advice:

The Chinese Communist Party, coming out of that weapons lab and hiding [the “CCP virus”].

Watters was all in.

WATTERS: The President needs to be much more aggressive in the way he confronts the Communist Chinese because they need to pay a price.

Americans need to see them paying a price and they need to feel it, because that's going to unite the country around a common goal.

This is dangerous stuff, especially with a guy like Trump who makes policy decisions based on what he sees on Fox.

Also of note: Bannon said nothing about Trump mitigating the pandemic so Americans stop getting sick and dying.

You can watch Bannon all but suggest Trump start a war for the sake of getting re-elected below, from the July 11, 2020 Watters World.