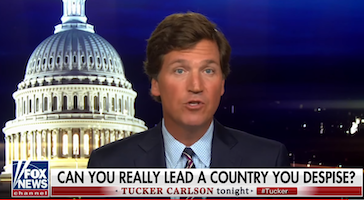 Sen. Tammy Duckworth, who lost both her legs serving in the Army in Iraq, had a nice comeback to Tucker Carlson’s accusation that she hates America.

In a commentary Fox News called, “Tucker Carlson: Can Democrats lead a country they 'despise'?” and subtitled, “These people actually hate America,” Carlson spewed hate all over America while pretending to love it. Interestingly, Fox left out the attack on Duckworth from its online summary of his pre-approved remarks.

Duckworth, Carlson noted, is in contention to be Joe Biden’s vice presidential pick. It must have been a bonus for Carlson’s white nationalist fans that she’s of Thai descent.

Carlson started with a white nationalist attack on Biden for talking about systemic racism in his July 4th message (while Donald Trump got a pass for defending statues of Confederate traitors).

CARLSON: That's your Fourth of July message? Systemic racism? Something you can't even define that has no real definition. Really?

CARLSON: Senator Tammy Duckworth of Illinois is a top contender for the job. You're not supposed to criticize Tammy Duckworth in any way because she once served in the military. Most people just ignore her.

But when Duckworth does speak in public, you're reminded what a deeply silly and unimpressive person she is.

CARLSON: [I]t’s long been considered out of bounds to question a person's patriotism. It's a very strong charge, and we try not ever to make it.

But in the face of all of this, the conclusion can't be avoided. These people actually hate America. There's no longer a question about that.

Funny, Carlson never addressed why it is that Duckworth would volunteer to fight in Iraq and, after losing her legs, serve in the U.S. Senate if she hates America. Because it’s part of how “deeply silly” she is? A ruse to destroy America? It’s worth noting that trust fund baby Carlson never spent a moment serving this country.

Yet, even as information comes out about the current commander-in-chief’s failure to act in response to news that Russia put bounties on U.S. troops in Afghanistan, Carlson had the nerve to sneer about Duckworth:

CARLSON: What kind of officer would you make if you didn't care about your troops? It would be awful. The results would be ugly, it would not work.

Loving the people you lead, caring deeply about them is the most basic prerequisite of leadership. The leaders of today's Democratic Party do not, they despise this country. They have said so, they continue, too. That is shocking, but it is also disqualifying. We cannot let them run this nation because they hate it. Imagine what they would do to it.

Carlson surely knows that more Americans consider themselves as Democrats than Republicans; that Democrat Joe Biden is leading Republican Donald Trump by nearly 10 points in national polls; and that Americans prefer Democrats over Republicans on a generic Congressional ballot by nearly 9 points.

So who really hates America?

Does @TuckerCarlson want to walk a mile in my legs and then tell me whether or not I love America?

No, Carlson would never do such a thing. It might spoil all the money he makes profiting from spreading hate and divisiveness.

You can watch Carlson demonize a bigger patriot than he’ll ever be below, from the July 6, 2020 Tucker Carlson Tonight.

Yeah, Tucker, the Democrats would be terrible for America.