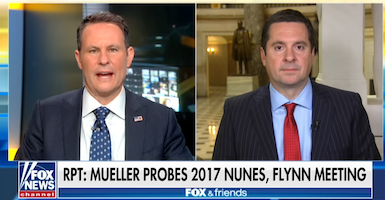 After a Daily Beast report that special counsel Robert Mueller is looking into a Trump inauguration meeting attended by Rep. Devin Nunes (R-CA), Michael Flynn and a slew of foreign officials, Nunes wasted little time heading to Fox & Friends for some Republican Rehab.

According to The Daily Beast, both the Mueller team and federal prosecutors in the Southern District of New York are investigating the funding behind the pre-inaugural breakfast at Trump’s D.C. hotel and whether it was part of any foreign influence on Trumpworld:

The breakfast has come under scrutiny by federal prosecutors in Manhattan as part of their probe into whether the Trump inaugural committee misspent funds and if donors tried to buy influence in the White House. The existence of that probe was first reported by The Wall Street Journal. The Special Counsel’s Office is also looking at the breakfast as part of its investigation into whether foreigners contributed money to the Trump inaugural fund and PAC by possibly using American intermediaries, as first reported by The New York Times. Robert Mueller’s team has asked Flynn about the event, according to two sources familiar with the Special Counsel’s Office questioning.

The fact that the prosecutors are looking at this is part of the whole question of the Trump way of doing business—how it may have given all kinds of foreign powers inroads into the White House,” said Hussein Ibish, a senior resident scholar at the Arab Gulf States Institute in Washington. “These cases are important because they involve possible elements of corruption and could tell us more about the special physics of Trumpworld influence which looks more like what you get in a banana republic.”

But Nunes, who served as the chairman of the House Intelligence Committee until this month and is now the ranking member, was asked nothing about the corruption that may have been uncovered by Flynn’s cooperation with Mueller. Nunes was not even asked if he knew anything about the funding. Instead, he was offered the friendliest of platforms from which to hurl untruths about the Mueller investigation.

Nunes was clearly familiar with the Daily Beast's report. Yet instead of accurately depicting the subject of the scrutiny, Nunes misleadingly suggested he was being spied on merely for meeting with the foreign officials:

NUNES: These guys, it’s always another day, they do another fake news story. I don’t even know what they’re talking about. … My job is to meet with foreign dignitaries. So I do that on a daily basis, multiple times per day.

During the inauguration week, there were numerous events that I attended, and I continue to attend. I continue to meet foreigners all the time, especially working with the ambassadors here in Washington, and you know, that’s what our intelligence agencies do. … They’re not supposed to spy on American citizens. … For the first time ever, our intelligence agencies got used to spy on a presidential campaign. So the fact that I’m holding meetings with ambassadors – you know, you can have at it because I do it every day.

Host Brian Kilmeade correctly noted, “It’s just whether they contributed funds to the inauguration. You were on the inauguration committee. That’s what Mueller’s evidently reporting.” But instead of questioning Nunes about that funding, Kilmeade quickly moved on to hand Nunes another opportunity to attack the investigation with new talking points. “And you say, too, that how do we get this information? Is Mueller leaking or is this unfounded?”

But Nunes did not want to talk about it. He noted that he was on the transition team, not the inauguration committee, and said, “Look, I don’t put anything into this.”

So Kilmeade helpfully moved on to give Nunes an opportunity to attack The New York Times report that the FBI opened an investigation into whether Trump was secretly working on behalf of Russia.

Nunes also appeared on Hannity last night. But he was asked no questions about the breakfast meeting.

Watch Nunes dissemble about the investigation into Trump corruption below, from the January 15, 2019 Fox & Friends.