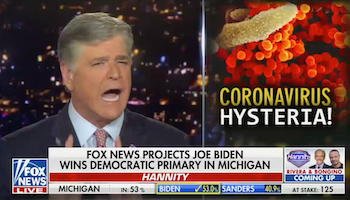 Sean Hannity’s downplaying of the coronavirus pandemic at its outset had deadly consequences for his fans whereas Tucker Carlson’s early warnings may have saved lives, a University of Chicago study has found.

The point of the study was not to make value judgments of one host over the other, but to evaluate the effects of misinformation among a more or less controlled set, in this case older Fox viewers.

In line with the differences in content, we present novel survey evidence that Hannity’s viewers changed behavior in response to the virus later than other Fox News viewers, while Carlson’s viewers changed behavior earlier. We then turn to the effects on the pandemic itself, examining health outcomes across counties. First, we document that greater viewership of Hannity relative to Tucker Carlson Tonight is strongly associated with a greater number of COVID-19 cases and deaths in the early stages of the pandemic. The relationship is stable across an expansive set of robustness tests. To better identify the effect of differential viewership of the two shows, we employ a novel instrumental variable strategy exploiting variation in when shows are broadcast in relation to local sunset times. These estimates also show that greater exposure to Hannity relative to Tucker Carlson Tonight is associated with a greater number of county-level cases and deaths.

We provide additional evidence consistent with misinformation being an important mechanism driving the effects in the data. While our findings cannot yet speak to long-term effects, they indicate that provision of misinformation in the early stages of a pandemic can have important consequences for how a disease ultimately affects the population.

The authors also note that when Hannity shifted his tone, in mid-March, “the diverging trajectories on COVID-19 cases begin to revert.” However, they also caution that over time, the picture could change. “For example, greater relative exposure to Hannity may have simply shifted the timing of infections that would have eventually occurred when the virus became more widespread.”

Still, the findings “suggest that a significant number of people died due to exposure to misinformation.” They also “indicate that provision of misinformation in the early stages of a pandemic can have important consequences for health outcomes.”

Before we give too much credit to Carlson, let’s acknowledge that his coronavirus alarm was very much centered in his white nationalism. In the comments cited by the study, his warnings painted the pandemic as a Chinese threat. For example:

All of a sudden the Chinese coronavirus is looking like a real threat, that could be a global epidemic or even a pandemic. It’s impossible to know. But, it’s the kind of thing that could be very serious – very serious. [January 28, 2020]

The Chinese coronavirus continues to spread tonight. The death toll now exceeding 500, that’s the official number. In the United States, there are now 12 confirmed cases of it. Meanwhile, alarming videos trickling out of China indicate the virus is far from under control. [February 5, 2020]

More recently, Carlson has been pushing people to rebel against mitigation measures (from the safety of his own remote studio) even as the pandemic rages.

In other words, Carlson’s politics happened to coincide with science at the outset of the pandemic. When they diverged, he chose politics over science, just as Hannity did when he downplayed the pandemic. Had Carlson not wanted to fear monger about the Chinese, he may well have gone the route of his Fox colleagues, too.

Of course I always knew Sean was a number two!

Hey Herr KKKlannity — do you know what today is (April 22,2020) ? IT’S NOW ELEVEN YEARS (and still counting) SINCE YOU PROMISED ON LIVE TV TO GET WATERBOARDED FOR CHARITY IN FRONT OF ACTOR CHARLES GRODIN!

Eyes On Fox commented 2020-04-21 16:35:01 -0400 · Flag
Speaking of studies and problematic Fox News propaganda factory fake news, MMFA has noticed a 75% drop off in mentions of hydroxychloroquine. Coincidentally, a nationwide VA study found significantly more people died on the drug than off it.

Though I have to be up front in mentioning the study was not rigorous nor peer reviewed. But add it to the Brazilian failed study of chloroquine Fox tried to poo poo. Not to mention people like John Oliver are publicizing the original French study that got Trump all excited was a complete mess. I think Oliver said its high rate of success was due, in part, to dropping the dead patients from the results.

Following Laura Ingraham on Twitter, even her hardcore shilling of hydroxychloroquine has given way to her endless ‘freedom’ drum pounding regarding the Liberate America movement. Why kill a few with a bad drug protocol when you can kill many thousands by greatly accelerating the spread of COVID-19 by dropping all social safety measure?