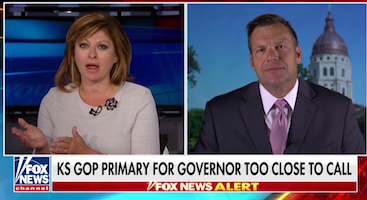 Kris Kobach, the Trump-favored Kansas gubernatorial candidate, got a friendly Fox News platform to talk up his plan to reinstate the tax cuts that even the state’s Republicans considered a fiasco. The only question host Maria Bartiromo had about it was whether Kobach would work with Donald Trump if elected.

Former Kansas Governor Sam Brownback’s deep tax cuts not only failed to produce the economic “adrenaline” to the state he promised, they wrought such economic damage that the state’s Republican-controlled legislature revolted and undid some of them last year.

But Kobach, the Republican candidate currently leading in yesterday's primary by fewer than 200 votes out of 300,000, called cutting taxes his “number one” priority. He ridiculously claimed that the 2017 negative growth in Kansas was “because of our high taxes.”

Bartiromo, who is one of Trump’s most obsequious lickspittles on Fox (which is saying a lot) did not challenge a word. Her follow up: “Do you think that the president has the support that he needs within Congress in terms of getting his agenda passed? How much of this is also about you, as the potential governor, working with the president?”

Kobach touted his experience working with Trump. "I was on his transition team and I advised him on immigration policy both before the election and since his election."

Bartiromo did ask Kobach whether he would recuse himself from any recount given that he is currently secretary of state. Short answer: no, he won't.

“The recounting is actually done by county election officials,” Kobach said. Neither of them mentioned that he controls the amount of the bond the candidate requesting a recount, presumably Kobach’s opponent, has to put up.

Even more importantly, Bartiromo should have asked about the debacle that was Trump’s voter fraud commission for which Kobach was vice chairman. The commission flopped in service of proving Trump’s claim that he lost the popular vote because of “millions of people who voted illegally.” So, predictably, Bartiromo didn’t say a word.

Richard Santalone commented 2018-08-09 12:31:54 -0400 · Flag
Once again, I will repeat Universal Tax Rule #1 from the Pulitzer Prize winning authors Donald Barlett, James Steele and David Cay Johnston: no matter how you slice it, when rich individuals and big multinational corporations don’t pay taxes or pay less than their fair share, SOMEONE ELSE MUST MAKE UP THE DIFFERENCE IN THE END! Working class Americans (including me) know all too well who that someone else always is.