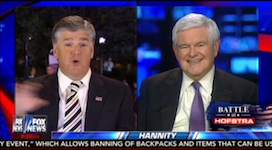 Even Trumpster Newt Gingrich thinks Sean Hannity has jumped the shark with his sick Swift Boating of Hillary Clinton’s health.

Last night was a supposedly special Hannity show but it featured the same guests that are on almost every night during the week: Newt Gingrich, Laura Ingraham, Sheriff David Clarke, Lisa Boothe, Geraldo Rivera and Democratic wanker Doug Schoen.

Hannity’s attacks on Clinton were also a retread. He replayed the video from last week, in which Clinton gave a very poor delivery in a video address to the Laborers’ International Union of North America and his chestnut of Clinton exaggeratedly bobbing her head at a gaggle of reporters for comic effect.

In the latter, you see Clinton and the reporters laughing. One reporter, the Associated Press’ Lisa Lerer, has affirmed that Clinton was joking, not ill, and a real epilepsy sufferer has condemned Hannity's deliberate distortions. But “Dr.” Hannity persists in talking about Clinton's "twitching" head.

Hannity previewed tonight’s debate by sneering, “There’s no coughing breaks if she has one of her infamous coughing fits. That’s gonna be a problem for her.”

Then it was time to replay the union video again, which Hannity falsely described as “an interview.” He said, “One has to wonder if these health issues are far more severe than they are telling us.”

“Do you see what I see?” Hannity asked Gingrich. But before the wannabe Trump VP could answer, Hannity went on to play the clip of Clinton and the reporters. “And there was this other incident where she was twitching, twitching, twitching uncontrollably.”

Gingrich could not keep a straight face as Hannity spoke.

“Why are you looking at me like that?” Hannity asked, as the video began to roll.”

Gingrich didn’t bite previously when Hannity prodded him to diagnose Clinton as brain damaged and he didn’t this time either. But that didn’t mean he didn’t join in the bashing. “Sean, Sean! You want to go off into health. This is a person who’s nuts! I mean, it’s not about her health, it’s about her brain,” Gingrich smirked.

But Hannity was not to be deterred. He played the gaggle video again, this time in slow motion. “Watch this!” he cried. “Watch this twitching that she does! One, four, five, six and does it again! ….Boom, boom, boom!” “Dr.” Hannity further opined, “Add that to the deep-vein thrombosis, the cerebral venal thrombosis. Add that to her collapse and all the other health issues she’s had. What do you think’s going on here?”

“I don’t know,” Gingrich said, in a funny voice, though it wasn’t clear if he was trying to mock Clinton or just change the subject. Then he began to attack her for being “joyless.” And he and Hannity began to speculate on whether Clinton would be “relieved” if she lost.

So what does it tell you about a guy who can’t stop lying about Clinton’s health like this?

It tells me that Hannity is worried about his beloved Trump’s performance in the debate tonight. Because nowhere did he predict that Trump would be able to trounce “brain damaged” Clinton.

Watch Hannity fabricate smears about Clinton’s health below, from the September 25 Hannity show. Then ask yourself, who really is unfit to be in the public arena?

I’m not sure which of the old standby guests you are thinking of as it seems to me a lot of the same old, same old on Hannity. But he seems to be sticking with Trumpers now and some of his old pals hate Trump: Mark Levin, Jonah Goldberg, Ben Shapiro to name a few.

I’m not sure why Trumper Stuart Varney is not on any more. He used to be a regular.

Antoinette commented 2016-09-27 01:41:30 -0400 · Flag
Grandpa Hannocchio has a lot invested in Trumpster, and this old hawk wants his return-on-investment. He would sacrifice his wife for Trumpster, if it meant winning the White House.

John McKee commented 2016-09-26 17:57:27 -0400 · Flag
The one, no two, mitigating factors in the horrible mix’n’mangle of Fox and their evil, half-brained hatefest toward Hillary: 1) They, and their unpleasant pack of drooling followers will be wallowing in the trough of despair in just six more weeks, and 2) The day of the long knives will be coming very shortly thereafter. Some may survive by the sin of their teeth, but it will be a very different Fox News by Christmas.

John McKee commented 2016-09-26 17:57:27 -0400 · Flag
The one, no two, mitigating factors in the horrible mix’n’mangle of Fox and their evil, half-brained hatefest toward Hillary: 1) They, and their unpleasant pack of drooling followers will be wallowing in the trough of despair in just six more weeks, and 2) The day of the long knives will be coming very shortly thereafter. Some may survive by the sin of their teeth, but it will be a very different Fox News by Christmas.

scooter commented 2016-09-26 17:38:09 -0400 · Flag
Hannity hasn’t had anything new or meaningful to say for 20 years now. It’s the same old trope with the names changed. Dems are bad and will ruin everything, repubs are the second coming of jeebus and will save the day. The man is a bald faced liar and fraud and has no business being on the air. If anyone ever deserved to be thrown in jail for sedition, Sean’s the guy.