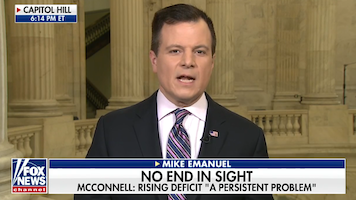 In a report on Democratic grilling of Treasury Secretary Steve Mnuchin over Donald Trump’s proposed cuts to Social Security, Fox News correspondent Mike Emanuel whitewashed them by referring to Social Security as “a popular entitlement program” instead of the social safety net it actually is.

Fox News anchor Bret Baier introduced the report by saying that Trump’s budget is “a hard sell” to Congressional Democrats. In reality, it’s dead on arrival.

It’s budget season on Capitol Hill which in this political environment means it is a target for attack. A Senate Democrat pressed the Treasury secretary this afternoon on a popular entitlement program.

The clip that followed made it clear that the “popular entitlement program” Emanuel referred to is Social Security. Describing Social Security as an “entitlement program” suggests that it’s some kind of welfare program people feel entitled to. But while the proposed cuts do not affect retirees’ income, they would cut about $45 billion in spending for disabled children and adults, i.e. the neediest among us.

As we noted earlier this week, it has been the Republican plan to expand the deficit via tax cuts, then fear monger about the deficit and demand spending cuts, especially to Social Security.

So what a coincidence that Emanuel would frame the program as some kind of freebie luxury.

Oh, and his closing of the report could have been written by the RNC. We saw a clip of Republican Senate Majority Leader Mitch McConnell saying the deficit “has been a persistent problem, no matter who’s been in power. There’s no question that the deficit has increased dramatically.” Emanuel didn’t mention the role of Trump’s tax cuts in the problem nor the promise that they would pay for themselves.

Instead, Emanuel said, “Key Democrats say the size of the debt does not poll well so it’s not a potent political issue. But with the nation’s debt more than $22 trillion and counting, the risk is it becoming an economic crisis at some point.”

You can see this latest example of Fox’s “straight news” report promoting Republican talking points below, from the February 12, 2020 Special Report.

Bemused commented 2020-02-16 04:59:24 -0500 · Flag
Forgot to highlight the fact that, while the USA is at the top of the scale for health care costs, the country ranks about 35th down the scale of outcomes in terms of life expectancy, child mortality, maternal mortality, and other vital statistics. Americans are being shafted.

Bemused commented 2020-02-16 04:54:56 -0500 · Flag
Unlike what the foxies and their minions (aka GOP electees) would like us to believe, most so-called “entitlements” are stuff for which the so-called “beneficiaries” have paid for in advance".

In the case of health care, a very large number of countries, including all 27 states of the European Union as well as the UK, Canada, New Zealand and Australia to name but a few, have some form of universal health coverage. Financing mechanisms vary but none of these programs is “free”, and none of them has torpedoed the nation’s economies the insurance companies and their minions (aka GOP electees) want us to believe. Performances may vary but it’s important to recall that it’s the horror stories that invariably grab our attention. Every study based on the facts placed in context that I’ve read over the years has concluded that universal health coverage is more efficient, more effective, more reliable and cheaper than relying on private, for-profit insurance companies.

The concept of universal health care is based on two, mutually reinforcing principles: 1) health care is a human right, and 2) healthy citizens are an asset for any society and its economy. I don’t think there exists a country where universal coverage “free”: all those programs are paid for in advance, very much like the practice of paying premiums to an insurance company. And the existing systems cost half or less what people pay per capita in the USA. If there is any area where “money should talk”, this is it.

I, personally, did not need health care until late in life and I feel no resentment towards anybody who may have received care thanks to my many years of contributions. Very selfishly, I would not want to take their place and be sick in their stead.

It wouldn’t surprise me to learn that people with great health insurance are actually a tiny majority in the USA. I definitely do know that people have forgotten what private companies used to do to increase their profits. To paraphrase Bill Bryson: “There’s got to be something wrong with a society that allows insurance companies to cut off benefits to people already being treated for an ailment.” That actually happened a lot before Obamacare was put in place.

The pre-Obamacare system in the USA was the anomaly not the rule on earth. And it should mean something to realize that all those other countries spend half or less per capita on health care than the average in the USA.

The USA had to kowtow to the insurance companies and Obamacare definitely needs a major overhaul (I’d be for replacing it, actually). However, it has done the job of planting the idea that health care is not a privilege but a right. And that a healthy population is an asset for any self-respecting country.

Rita Kaskoff commented 2020-02-14 07:22:26 -0500 · Flag
As a long retired person, I’ve heard this song so long. Social Security is my main income. I have two tiny state pensions. One of them (the smaller one) gives an annual cost of living adjustment. The other has been frozen for years, thanks to a Republican governor.

I get by, but my income essentially goes down each year.

So does that of my friends on full pensions from the freeze.

The current regime seems to be aimed at killing off as many low-middle income people. That would allow more space for the wealthy grifters.

One thing they don’t consider is who in the world will provide the labor when people of all ages die of unmet medical needs?

Ellen commented 2020-02-13 22:27:32 -0500 · Flag
Eyes, It isn’t the use of “entitlement program” per se, although I find that a GOP-friendly term for what I consider a social safety net. It’s the fact that Emanuel used that term instead of calling the program by its real name.

John McKee commented 2020-02-13 16:51:08 -0500 · Flag
Delicate territory for Fox when you consider the majority of their congregation are pretty attached to their Social Security cheque…

This is intended to help drumroll the massive actual cuts they intend to inflict on “entitlements” in 2021 if the Dems stay home this November.

I’ll remind everyone that the plan for the big reductions in Social Security and Medicare is publicly available at the Heritage Foundation website. It’s not like they’re hiding their intentions here.

The idea is essentially what Ellen noted, although they’ve been more pernicious about it. Angry Right Wingers have wanted to get rid of these programs ever since they were established. The current approach to destroying them is decades old.

Any potential future shortfalls could have been dealt with 15-20 years ago with minute adjustments in payroll tax levels for employers. But the Republicans refused to make any such adjustments, thus starving the programs and establishing a false premise of how they are going bankrupt. We can still make those adjustments to the payroll tax levels, but they’ll have to be a little larger now, since the Right Wing has forced the delay.

But the intention by Right Wingers is actually to continue fearmongering, and to float these nonsense proposals til they get their majorities back – and then lower the boom.

If they win this November (ie if Dems stay home), they’ll reduce SS to a 1K flat payment per month, only available to indigent elderly (and this will apply to everyone under the age of 60, so it won’t hit the current retirees). They’ll reduce Medicare to a tiny voucher supplement for you to go to your own doctor and you’d have to have your own coverage. And the retirement age will be extended to 69 or 70 – again for everyone under 60. Anyone complaining that they contributed for decades will be told that it can no longer be afforded, and that you have an additional decade to save something for yourself.

This is but one reason why it is crucial for everyone to actually show up this November.

Eyes On Fox commented 2020-02-13 12:06:41 -0500 · Flag
Well, I haven’t been paying attention to the news of late. Like watching maybe 30 minutes of cable news in the last month (and that was visiting a friend; she likes CNN). Yet still I probably need to talk to my doctor about anti-depressants re: sickening Democratic primaries.

That said, even in a news blackout I did hear – elsewhere of course – Senate Majority Leader #MoscowMitch planned to bury Trump’s budget in the Senate he was so embarrassed by it. So Bret’s intro singling out Democrats as critics tickles me to no end. I’d send the Trump butt-licker a tweet but I was reminded today he’s blocking me. Can’t imagine why.

Slap me with a wet noodle but I’ve been known to call Social Security an “entitlement program” myself so that doesn’t bother me. What strikes me like a hammer between the eye sockets is how a story on the release of the Trump budget has become all about the Democrats.

Mike Emanuel kicks this partisan farce off with “It’s budget season on Capitol Hill which in this political environment means it’s a target for attack.” Given that framing, Mike thinks it appropriate to spend at least half of the segment (feels like more) not talking about the release of Trump’s budget but attacks on House Democrats. Oh, he does find time to toss in a sympathetic clip of #MoscowMitch acting all bi-partisan in the Senate blaming both sides for the deficit. Point being we learn next to nothing about Trump’s budget but a quick graphic on spending priorities which, strangely, fails to mention Social Security at all. Isn’t ‘cutting the rate of increase’ trying to curtail its growth too, Mike?

Apparently the debt isn’t the only thing that didn’t poll well with partisans, Mike!

scooter commented 2020-02-13 11:53:48 -0500 · Flag
And the stupid droolers that watch FOX will buy the con, and vote against their own interests – again. SS is something we all pay into all our working lives, then get the benefit of upon retirement. That’s why it’s called entitlement. The word itself has been weaponized by FOX and repubs.