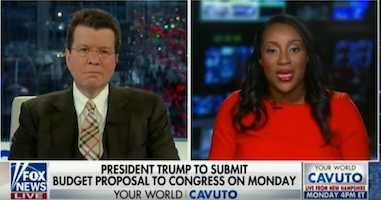 When does Fox News care about Trump’s debt and deficit spending? When they can be used to urge the Viewer in Chief to cut social safety nets.

On Fox’s Your World, a business show, nobody mentioned how Trump had promised to eliminate the debt in eight years but has instead increased it by $3 trillion. Instead, all the focus was on cutting “entitlements.”

“Let’s talk about Social Security, Medicare, and Medicaid spending which is astronomical and continuing to rise at, what, 20-30% over the next decade or so,” guest Patrice Onwuka said.

Host Neil Cavuto was skeptical of cuts actually happenings but he obviously hoped for them. “You know what happens,”  he said. “As soon as someone even mentions trying to reign that in, you’re a monster, you’re a villain, you’re taking Social Security checks away, Medicare coverage away.” He added, “So even slowing its growth, just slowing its growth, becomes a Herculean task.”

Onwuka agreed, saying, “That’s why it’s called the third rail.” But, she hoped Trump will do it anyway. “I would love to see President Trump stand up and say OK, we need to at least have a discussion about entitlements and how do we slow the growth,” she said. “We’ve heard, unfortunately, Democrats putting out bills that would continue to expand Social Security and the amount of benefits that are given out.” Yes, God forbid Americans get more benefits instead of giving millionaires and billionaires more tax cuts.

Cavuto claimed that Trump “has not expressed any willingness in addressing these entitlements in the past.” Cavuto just happened to wonder, “Is it your sense maybe if he’s re-elected that that’s when he tries it?”

In fact this whole conversation could have been scripted by the Senate Republicans. In August, 2019, Forbes reported:

Sen. John Thune (R-SD), the second-ranking Senate Republican, expressed hope to the New York Times that Trump would be “interested” in reforming Social Security and Medicare. Sen. John Barrasso (R-WY) was even more optimistic. “We’ve brought it up with President Trump, who has talked about it being a second-term project,” Barrasso said. Senate Leader Mitch McConnell (R-KY) has made no secret of wanting to cut Social Security.

In using deficit fears to target entitlement programs, many Republicans are hoping to use Trump's second term to cut Medicare and Social Security. First, expand deficits through tax cuts, then declare that spending must be slashed. The chief target of these proposed cuts is Social Security, which historians have noted the mainstream Republican party has long sought to diminish, privatize, or both.

Meanwhile, Onwuka and Cavuto lamented that Trump hasn’t put enough of Social Security, Medicare and Medicaid on the chopping block. Onwuka said he’s “leading with the waste, fraud, and abuse angle of trying to tackle the smaller bite that might be more bipartisan.”

Cavuto called that “like looking at change underneath couch cushions.”

“We can’t continue to push this down the future and think oh, don’t touch my entitlements. There has to be some sort of give and take, and somebody has to be brave enough to make that case,” Onwuka said.

Watch Fox look to privatize or take away your social safety nets in order to protect tax cuts for the ultra wealthy below, from the February 7, 2020 Your World.

Lawrence Geller commented 2020-02-12 10:39:45 -0500 · Flag
You know Cavuto, you and the rest of your millionaire friends ARE “monsters”. Anyone who thinks Social Security recipients are living “high off the hog”, should try living on the pitiful amount of money I receive every month. Yes, on my monthly $758, I can barely get to sleep at night, debating what color my second yacht should be.

Actually, what keeps ME up at night, is debating at the end of the month, is whether I can buy medicine or groceries!. Here in Massachusetts, in order to qualify for medical coverage, I had to voluntarily go into poverty.

Ironically, I just returned to the U.S. last year, after living for 15 years in Thailand, where I taught school. While there, I had a quadruple bypass performed at my local hospital. Guess how much this cost me? Would you believe ZERO? I wasn’t a Thai citizen. How was this possible? Well, I was over 60 years old and I paid my taxes. Even though Thailand is hardly as wealthy a country as the U.S. Everyone, no matter how poor is taken care of. You might have to spend the day waiting to see a doctor, but in the end, you are taken care of. Incidentally, the cardiac surgery at my local hospital is as modern as any in the U.S. and the doctors and nurses were as professional as any in America. It turns out I knew many of them because I taught their children!

I’m wondering now why I returned. If (and I hope to God it doesn’t happen), Donald f***ing Trump wins the upcoming election, I think I may go back to Thailand, where I still have a lovely home. Yes, Thailand has a king, but it DOESN’T have an emperor! If the majority of Americans are willing to have their “Dear Leader” shred the U.S. Constitution, then I think it is time to leave. How sad :-(

Kevin Koster commented 2020-02-12 09:57:24 -0500 · Flag
I wouldn’t give up just yet. Let’s see what happens over the rest of the primaries. Unless Buttigieg suddenly runs away with most of the states, I don’t think we’ve seen the actual nominee prevail yet.

The only way the GOP squeaks through again is if Dems stay home this November. Fox News is desperately promoting a notion that Trump is somehow going to have a “landslide” – as they’re hoping to depress turnout by everyone else, as usual. I wouldn’t give them that satisfaction. Instead, I continue to urge EVERYONE to show up and vote this November. It’s the only way to head off bonehead ideas like the Heritage plan for SS and Medicare.

Eyes On Fox commented 2020-02-12 09:14:40 -0500 · Flag
Normally I’d blow off this standard Fox News/GOP talking point cycle. They pass huge tax cuts promising they’ll pay for themselves. They don’t (that ol’ elasticity of demand thingie). Then it’s, oh, what a wonderful time to cut entitlements like SS and Medicare that are separately funded and don’t add to the budget deficit but we’ll pretend they do. It always scares; never passes.

But now we have a perfect storm. An mentally ill POTUS with no moral compass and fewer brains crazy enough to push it to the limit and a compliant party of sheep willing to follow him off any cliff.

No worries though. The Democrats will nominate a reasonable choice for the rest of us who can beat Trump. But wait… BERNIE F—KING SANDERS!!!

After 28 years of solid red my congressional district turned the lightest of light blues in the midterms. I’m going to cry when it flips back in 2020.

The intention of angry Right Wingers over the past several decades has consistently been to get rid of Social Security and Medicare. The obvious approach has been threefold:

1. to starve the programs of needed funds by refusing to make small tax adjustments;
2. to then declare the programs insolvent and make major cuts, thus infuriating millions of people who paid into the programs for decades; and then
3. to finally cancel the programs several years later, on the basis that the public has lost confidence in them and that they benefit very few at this point anyway.

The Heritage Foundation has a developed plan that the Right Wing will use if they get a chance next year. It’s a pretty simple approach to #2 on that list.

The Heritage plan makes tremendous cuts in both Social Security and Medicare, albeit for those under 60 and who are not yet in the programs. Current recipients would be spared.

For Social Security, they’d reduce benefits to 1K per month as a flat, extend the retirement age to 69 or 70, and means test any applicant to confirm they did not have much of a pension or 401K. For Medicare, they’d reduce it to a small voucher and do the same eligibility age delay to 69/70 and apply the same means test. It basically would mean that Middle Class Americans would no longer see any benefit from these programs, even if they had been contributing for 30 years or more.

On the other hand, if Dems can actually show up to vote this year, perhaps we could just make that tiny adjustment in the payroll tax and end this entire nonsensical exercise.

John McKee commented 2020-02-11 23:14:33 -0500 · Flag
It never fails to shock and disgust me that people who study and discuss the economy for a living, and should know better, continue to push for tax cuts for the rich and ‘entitlement’ cuts for the poor and middle class.

Even Shrub came to understand (a little too late) that the way to stimulate the economy is to put more purchasing power into the pockets of the masses. The 90% spend that money with American businesses, helping them prosper in turn, and the wheels of commerce continue to turn. Giving windfalls to the rich achieves nothing. They spend on travel, luxury European cars, real estate and send any excess to overseas tax hideyholes – a much smaller percentage goes back into the economy than if that same money goes to the masses.

Anyone that clings to the ‘job-creators’ myth should remember that businesses only start up or expand in response to a perceived market opportunity, NOT because they have spare money. Employing workers is just an expense like plant and machinery, and they’ll always avoid it if they can.

Sorry for the lecture – pretty angry right now and felt an urgent need to vent!