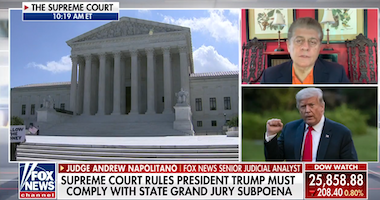 Fox’s Judge Andrew Napolitano predicted that today’s Supreme Court ruling will result in Donald Trump’s financial records being turned over to the Manhattan district attorney before the election because “the accountants say they have it and they’re ready to turn it over.”

Appearing on America’s Newsroom this morning, Napolitano addressed the first decision this morning, in which Trump had attempted to block New York City’s DA from getting his financial records for a grand jury. The New York Times called the ruling “a stunning defeat for Mr. Trump but a decision that probably means the records will be shielded from public scrutiny under grand jury secrecy rules until after the election, and perhaps indefinitely.”

On NBC News, Justice Correspondent Pete Williams pointed out that the court sent that case back to the lower court which gives Trump a chance to object again, but only “with the same kind of arguments that any other person would be able to raise as an objection in court." But, Williams noted, the court “took away all the arguments the president made about why he is different and special.”

SMITH: The Supreme Court sidestepping the issue of state grand jury subpoena for Trump financial and tax records. That’s the headline. What does it mean, Judge?

Napolitano went on to spell out the bad news for Fox Fan in Chief Trump:

NAPOLITANO: So this is a defeat for the president, because ultimately … this might not affect the election but it certainly will affect the president’s peace of mind because he knows that at some point, his bitter nemesis, who’s conducting a criminal investigation of him, Cy Vance – a criminal investigation predicated on the testimony given to Vance by the president’s former lawyer, Michael Cohen – eventually, that’s going to go forward. Whether it happens before November or after November is a question of whether the courts can get all this done.

I would think this’ll be resolved before November. It’s July, the subpoena is extensive, it demands 10 years worth of information, but the accountants say they have it and they’re ready to turn it over.

You can watch the legal analysis that will almost certainly not make it to Fox News prime time below, from the July 9, 2020 America’s Newsroom.

scooter commented 2020-07-09 15:15:59 -0400 · Flag
I have become so cynical when dealing with things related to Chump and the law. I remain extremely skeptical that he will ever face justice, unless it’s from Putin who makes him disappear altogether. Personally I’d love for him to face a real reckoning and spend the rest of his rotten life in prison, financially destitute, and his entire brood ruined for all time.