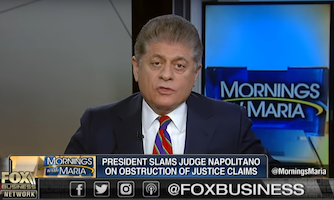 Judge Andrew Napolitano did not walk back any of his allegations that Donald Trump obstructed justice and should be impeached but he did, oddly, make a point of stressing his friendship with Trump.

As I wrote yesterday, Trump attacked Napolitano on Twitter Saturday after he bluntly accused Trump of obstructing justice and noted that that’s an impeachable offense. That was less than two weeks after Napolitano said the Mueller report showed “a venal, amoral, deceptive Donald Trump” that was the same Trump Michael Cohen described.

....Ever since Andrew came to my office to ask that I appoint him to the U.S. Supreme Court, and I said NO, he has been very hostile! Also asked for pardon for his friend. A good “pal” of low ratings Shepard Smith.

This morning, Napolitano visited Fox Business Network’s Mornings with Maria show to refute the claims in Trump’s tweets that Napolitano had sought a seat on the U.S. Supreme Court and had asked for a pardon for “a good ‘pal’ of low ratings Shepard Smith."

Host Maria Bartiromo, a Trump sycophant, asked no questions about Napolitano’s obstruction of justice argument, nor did she note Trump’s smarmy swipe at both Smith’s and Napolitano’s sexuality (each are gay).

Yet, despite Napolitano’s forceful seeming-condemnations of Trump, he first responded to Trump’s tweets by joking, “This is the way you treat your friends? How do you treat your enemies? Oh, boy.”

Bartiromo did not laugh in response.

I’ve got nothing good to say about Trump’s behavior or his Twitter response but it’s odd that Napolitano should expect to be treated as a friend after saying what he has. Yet, Napolitano later underscored the point by saying, “He and I have been friends for 30 years and probably will be for the next 30 years.”

Really? Why on earth would Napolitano want to be friends with the kind of law-breaking POS as per his own description of Trump?

I have wondered what to make of Napolitano’s un-Foxy comments about Trump’s criminal behavior:

Was Fox trying to send a message to Trump and/or Republicans that he’s likely to be impeached? Hedging its bets in case there comes a time when pro-Trump propaganda is no longer a good business strategy? Or using Napolitano to boost its cred now so that it can say later the network was not totally in the tank for Trump? All of the above?

John McKee commented 2019-05-03 10:28:17 -0400 · Flag
I can only conclude that the malignant octopus of Trump/Putin kompromat has its tentacles firmly round the gonads of dozens of the cabal and its enablers. The chances of so many previously sane people losing their minds at the same time are vanishingly small.

Eyes On Fox commented 2019-04-30 08:48:53 -0400 · Flag
This vaguely reminds me of Rosenstein’s puzzling resignation letter where he gives Trump a big wet kiss. This despite Trump routinely trashing the guy.

I both understand Trump’s hold on conservatives given his rabid MAGA base but I also find their sycophantic behavior strange and unprecedented. How much crow are these people willing to eat? And for such small benefit. Because Trump is a coward and if more Republicans would stand up to him he’d melt. Then they would gain influence. Not to mention self respect.