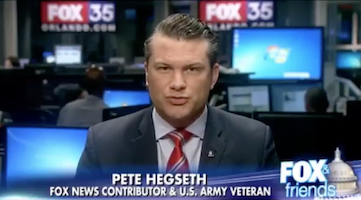 An investigation into Fox host Pete Hegseth, reportedly in the running as Donald Trump’s next VA secretary, reveals that the two have so much in common - and not in a good way.

APM Reports' deep dive into Hegseth's history found a man whose squeaky-clean image of American values is anything but. It’s true that he served in the military with distinction. But just about everything else about Hegseth has a distinct stench:

I’ve been divorced and conceived a child out-of- wedlock with my second and “ultimate” wife. … We married, had that child, and have now had a second child. No policies or tax incentives changed my by-de nition [sic] high-risk behavior. It was my family and the culture of values and priorities they instilled that enabled me to move past circumstances that plague so many adults and children. Had I been raised in a family where faith, delity, and fatherhood were not valued, my choices could have led to family breakdown.

Well, as it turns out that second wife was not his “ultimate” after all. Nor was that first out-of-wedlock child an anomaly. From APM Reports:

In September, Hegseth’s second wife, Samantha, filed for divorce in Minnesota. The divorce filing is dated one month after Hegseth and a Fox News producer who worked on his show named Jennifer Rauchet had a child, according to a person with firsthand knowledge of the relationship.

According to Mediaite, Hegseth and Rauchet began living together before either of their divorces was final. Rauchet was reportedly transferred by Fox from her position as executive producer of Fox & Friends (where Hegseth is a cohost) to Watters World. It must have been a welcoming environment for her. Host Jesse Watters’ own marriage recently broke up over his extramarital affair with a producer on The Five (which he also cohosts).

Hypocrisy aside, none of Hegseth’s personal failings directly bear on his ability to run the Veterans Administration. But AM Reports noted that Hegseth has no experience running a large organization. Furthermore, the management experience he does have leaves plenty to be concerned about:

As executive director of Concerned Veterans for America, Hegseth was atop the organization when his brother, Philip, was hired for a media relations position. The relationship was noted in the organization’s tax records in 2016 and 2017 because federal law requires the organization to disclose any family members of officers. The organization paid Philip Hegseth $108,000 over that time period, records show.

It was Philip Hegseth’s first job after graduating from the University of St. Thomas in May 2015, according to his LinkedIn profile. Philip Hegseth did not return calls to discuss his employment at Concerned Veterans for America.

In 2012, Hegseth formed MN PAC, an organization aimed at supporting “conservative candidates in contested races.” But an analysis of the organization’s spending — less than $15,000 — shows it spent less than half on behalf of candidates. A third of the PAC’s funds was spent on two Christmas parties and reimbursements to Hegseth.

In short, Hegseth’s history of nepotism, putting unqualified personnel in high positions, questionable use of other people's money and serving as a bad-husband poster child make him the perfect soulmate for Trump.

But the good news for the rest of us is that he reportedly has no chance of Senate confirmation.

Erich Pomfret commented 2018-03-29 08:03:54 -0400 · Flag
In a huge step forward, the actual nominee turns out to be Dr. Jackson, whose first task will be learning how to sign public documents without spelling his name incorrectly.

The endless incompetence driven by Trump’s mercurial, emperor-like behavior would sink any other president. What competent president picks a cabinet member or his attorney off of cable TV without any prior vetting?

Forgetting Pete’s moral hypocrisy and corruption – like you say The Donald shares (and may admire) these traits. More disturbing is no experts in the VA would recommend an inexperienced person like Pete for a short list to head the VA, the 2nd largest agency in government, just because he’s an appealing talking head. But that’s how incompetent Trump thinks. Trump has mouthed off himself on talk shows for years and is so impressed with his partisan spews he think he’s brilliant and the only person who can fix America. That’s how we end up with incompetents like Carson in charge of HUD or Perry at Energy.

Even more disturbing than Trump making a pick only to realize he’s got disturbing skeletons in his closet – it happens – is Trump looking for sycophants on gut feelings or mere appearance. We have the comedy of Trump booting lawyer John Dowd before he met Joseph DiGenova who he ultimately rejected because he looked unkempt when not cleaned up by a Fox studio make-up artist. Or the rumor early in his administration he rejected John Bolton because he didn’t like his mustache. Which begs the question now that he’s reversed himself and picked Bolton will he make him shave off his mustache?

In other words, a Republican.

Homeboy Halligan commented 2018-03-28 18:31:22 -0400 · Flag
Hegseth lost his shirt investing in Bitcoin and the bastard tried to use his position as on air personality to try and convince Teabaggers into investing to save his crooked ass.

Antoinette commented 2018-03-28 15:46:45 -0400 · Flag
We are not surprised by this news. These two clowns aren’t the only ones sneaking around the building. There are more that will be outed from the closet.

That Wretched Rauchet has worked for this demonic network for about 12 years. The only thing this cheap broad can produce is children. She should have been terminated long time ago.

We encourage the masses to take this information and spread to the social media world.

Fire these two hypocrites or the masses will continue to spread this affair to other media channels, and on all radio stations throughout the nation.