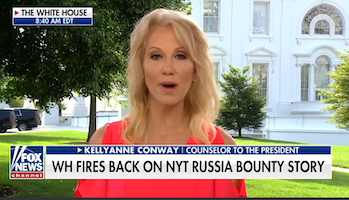 As Donald Trump seemingly does nothing more than whine “I knew nothing!” about reports of Russian bounties on U.S. troops, his Fox Friends are happily helping adviser Kellyanne Conway promote that as a legit response.

During her visit to Trump’s favorite morning show today, Conway hit back at Joe Biden’s blistering criticism of Trump’s lack of response to the reports. She called Biden’s “dereliction of duty” charge “rich with irony” because Biden “bemoaned the fact that we took out [Iranian Gen. Qassem] Soleimani, a bloodthirsty terrorist who had killed many Americans and others. He said there wasn’t enough evidence to do that.”

Actually, what Biden said was that Trump “flat-out lied” when he said Soleimani had plans in place to attack U.S. embassies in the Middle East. Not surprisingly, none of the three sycophantic cohosts pointed that out.

According to Conway, that, plus the fact that Biden “somehow knows there’s enough evidence, verifiable evidence” that Trump was briefed on the Russian bounties and should have acted on it is “one of the many reasons Joe Biden is unfit to be president of the United States and Commander In Chief.”

That was a huge mischaracterization and was also deliberately misleading. What Biden said was that Trump should have “gotten to the bottom” of any intelligence discrepancies and told Putin “if any of this is true and it doesn’t cease immediately, you’ve got a big problem.” Biden did not, as Conway suggested, call for immediate action against Russia based on newspaper reporting.

Conway went on to say she had talked to Trump and the National Security Council and that “the reason the president wasn’t briefed is because it wasn’t verified. In fact, the career CIA briefer to the president of the United States, not a political appointee, decided against including in the briefing.”

The big question is what is Trump doing about the matter now? The answer appears to be “nothing.” You probably will not be surprised to know that the question was never asked, despite cohost Ainsley Earhardt’s claim to want to be a journalist asking “tough questions” and “not in the tank” for anyone.

Conway moved on to attacking Democrats over “the fake dossier,” among other subjects, accused Biden of being “soft on Russia, soft on China,” and sneered, “I think if the Biden campaign could get Putin to vote by mail, of course, in Michigan or Pennsylvania they would have him do it.”

One of the hosts snickered off screen.

Cohost Brian Kilmeade, apparently working toward his “9” on the Trump approval scale, said, “Remember the first thing he [Biden] and his administration did was take out the missile shield in western Europe to try to kiss up to Vladimir Putin.”

You can watch the three flunkies help cover up Trump's dereliction of duty below, from the July 1, 2020 Fox & Friends.