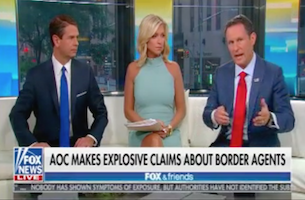 You’d think that Ingraham’s description of child detention facilities as “essentially summer camps” and the advertiser loss that ensued might have made the Trump TV sycophants a tad less lighthearted in their praise of Glorious Leader's hideous treatment of migrants at the border. But apparently fear of Alexandria Ocasio-Cortez trumped all else.

Media Matters caught these comments from cohosts Kilmeade and Griff Jenkins this morning. The comments came after cohost and self-styled best friend to Jesus, Ainsley Earhardt, suggested that Rep. Alexandria Ocasio-Cortez staged a phony “outburst” after she viewed conditions at a camp in Clint, Texas. Jesus’ BFF showed not an iota of concern for the migrants’ conditions which are obviously horrible, regardless of anything Ocasio-Cortez says or does. But Kilmeade’s remarks were far worse than Earhardt's:

Six hundred and seventy thousand have come here illegally already. They had 89,000 last month. The month before, 130,000 coming illegally. They have facilities that hold hundreds, not tens of thousands. And now you are going to walk down there with the facilities that they gave, that they're not pulling out of their pocket, they're uniforms you gave them, and say the facilities are not right?

JENKINS: Look, you got to remember, the comparison to the concentration camp, her previous criticism, isn't fair because all the people that are in our custody came on their own accord.

“Good point,” Earhardt murmured after Jenkins spoke. Just how Jesus would have seen it, I'm sure.

What was the last “party” you went to where you:
- Were locked in a cage under armed guard
- Drank out of a toilet
- & given food of such poor nutritional value, for so long, that it gave you mouth sores? https://t.co/UfO8EQzRbI

Watch the three cohosts excuse the inexcusable below, from the July 2, 2019 Fox & Friends, via Media Matters.

Eyes On Fox commented 2019-07-02 18:37:11 -0400 · Flag
Forgetting the ridiculousness of the “Fox & Friends” curvy couch ‘analysis’. It’s deliberately wallpapering the obvious truth. Most shocking is, at the end, Ainsley Earhardt feigning concern of agent abuse yet she repeats with some emphasis “if it’s true” to telegraph her doubts.

At the same time we have the rest of the media covering a disturbing ProPublica story “Inside the Secret Border Patrol Facebook Group Where Agents Joke About Migrant Deaths and Post Sexist Memes”:
https://www.propublica.org/article/secret-border-patrol-facebook-group-agents-joke-about-migrant-deaths-post-sexist-memes?fbclid=IwAR2zpSJbz9C8sntN6lV-auJlfYnzUSlcKaPAqSFWg0Wj1ZmtFb_MQIi1B2I#

This story unveils a private FaceBook group of 9,500 current and former border control agents. ProPublica was able to trace FaceBook accounts to current border patrol agents. Their posts are beyond disgusting. In keeping with “Fox & Friends” contempt for AOC here, the “I’m 10-15” group naturally takes it to the gutter posting fake images of AOC performing oral sex – I warned you this group is beyond disgusting.

Ainsley needs to pull her head out of the sand – assuming it’s not all an act (which it probably is).

MSNBC as I type this is interviewing a former female border patrol agent with a deeply disturbing narrative. Like routine cover-ups of rapes at the border patrol academy. She makes the observation suddenly we have a humanitarian crisis with 4 times the agents than when she served yet significantly now we have fewer border detentions. Sure, the demographic mix has shifted but that’s no excuse.

The truth is the humanitarian crisis is classic Trump. He first creates a crisis then later takes credit for pretending to solve it. Not sure when Trump ends his hardliner policies meant to deter people from trying to emigrate to America and declares victory.